From Airlie Beach on 24th July we sailed the 15knot wind passing the top of North Molle Island across the Whitsunday Channel then into Sawmill Bay tucked behind Cid Island. We dropped Blue Heeler’s anchor in beautiful clear aqua water. Our water temperature gauge reckons the water is around 16 degrees – I would have thought it warmer up here for this time of year.

Unbeknown to us, a couple of days earlier the parents of a former work colleague of mine were anchored within cooee of us when we were anchored at Burning Point on Shaw Island. Now that we were at Cid Island and after a few emails they sailed across from Hook Island and dropped in for a delightful chat and a cuppa!

In the afternoon, Wayne and I took the dinghy for a spin around Sawmill Bay. Stopping at the small rocky beach we dragged the dinghy up the beach but not too far as the tide was going out and we didn’t want to leave it high and dry. It weighs around 40kgs, but with the fuel and outboard it’s pretty heavy – perhaps a little too much weight for the wheels on the transom. They tend to sink into the sand and drag through the sand – I’m sure they’ll rip right off one day. Some other dinghies I’ve seen have huge tyres like the ones found on wheel barrows. 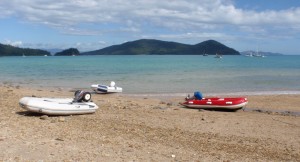 Our dinghy on the water's edge. Check out the wheels on the other dinghy!

A small trail took us through the trees and rainforest up and over into Dugong Beach, 1km walk away. It was enjoyable to get out and stretch the legs. Sitting like a rock at the water’s edge was a large turtle. He was in a bad way. The tide was going out and the poor fella looked a little dry and very weak. A couple from another yacht came along and we all lamented the likely demise of the turtle. I’d heard on the news recently there is a mysterious illness causing sea turtles in this area to wash up on beaches and die. The couple said they’d call the necessary authorities just in case they can help him. 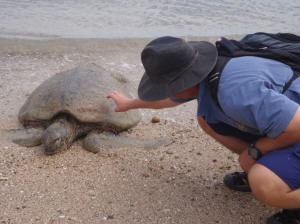 On the way back to Sawmill Beach with Wayne walking ahead, I noticed something moving as he lifted his rear foot. A snake slithered from under his path – I can’t be certain if he actually stood on it but the snake continued on his way and slinked into the leaves and twigs on the side of the narrow path. I managed to take a couple of photos before it disappeared into the undergrowth.

What do you reckon this snake is?

Once back on the boat I searched on Google, ultimately finding the site http://www.snakesofthewhitsundays.com. The only snake that resembled the one that Wayne had almost stood on was a Death Adder! Treading with more attention on the remainder of the trip, we finally ended back at Sawmill Beach and spotted a large monitor lizard attempting to be inconspicuous as he hung onto a large mangrove tree.

Safely back at the beach, we hauled the heavy dinghy back into the water and bounced over the small whitecaps back to Blue Heeler.

From Sawmill Bay we sailed across to Nara Inlet at Hook Island and stayed tucked up for a couple of days. While the wind blew outside, Wayne’s iPad kept us busy in the evening – he’d downloaded apps for Scrabble and Monopoly. The games are great fun and much better than playing on a board as we can play against each other or against the iPad – the quality of the graphics is superior and amusing. Wayne ended up winning Scrabble with words like ‘toxic’ and ‘ordeal’ outdoing my ‘quote’ and ‘jive’. Switching to Monopoly, my strategy of quickly purchasing valuable streets, building rows of houses and hotels reaped rental rewards for me and triggered the dramatic collapse of Wayne’s empire (bahaha). There will be a rematch!

After a day or so at Nara Inlet, we decided to return back to Airlie as the wind was expected to be 20/25knots making it unlikely we’d get in any diving on the reef. From Airlie we continued north for a quick stay at Double Bay. As we left the following morning we attempted to dodge bullets of wind gusting from the hilltops. Once out of the lee of the hills and crossing the path of a couple of passing whales, we had a strong 20+ knots from the southeast taking us northerly until we could gibe and head towards Gloucester Passage. We’d arranged to arrive at this narrow passage halfway into an ebb tide to ride the westerly current through. The passage was straightforward with the pace picking up as we were spat out at the end of the channel on an outgoing 2knot current. The dependable wind blew us across Edgecumbe Bay for a couple of hours before we gibed and headed up on the west side of Stone Island in Bowen’s outer harbour. The anchorage is quite a distance from the Bowen marina so we didn’t attempt to dinghy across in the strong conditions.

Up early the next day we left Bowen, rounded the North Island lighthouse and headed in a north-westerly direction to travel the 46nm to Upstart Bay. The wind once again was on our tail allowing our sails to be winged out for the second half of the journey. Just after we had lunch I was looking at the coastline through the binoculars on the port side. As I turned around to talk to Wayne, my eyes widened in surprise as I saw a couple of small whales about 5m from Blue Heeler! “Whales, whales” I yelled whilst simultaneously grabbing my camera off the binnacle. Unfortunately though the whales were unwilling to participate in a photo-shoot that day. A few hours later we saw more whales rising slowly out of the water before dipping below. Very cool!

After a big day sailing, we rounded Cape Upstart late afternoon. I turned the wheel to port while Wayne finished off putting away the pole up on the bow. Strong gusts of wind blew down from the high hilltops hitting us beam-on increasing our speed to 7knots and with full sails the boat heeled somewhat too. I could hold the helm, but I had to wait until Wayne returned to help me furl the sails to get better control. Our original plan was to sail into the southeast corner of the bay, although the direction of the wind and likely fetch over the stretch of shoaling water didn’t appeal to us. We decided to turn around and headed back up towards Shark Bay located just under the lee of Cape Upstart and dropped anchor for the night.

Our intention on Wednesday was to sail to Cape Bowling Green for the night – 35nm from Cape Upstart – however the strong wind warning which suggested up to 30knot winds didn’t quite eventuate for us (luckily). By lunchtime as we neared the shallow shoals of Cape Bowling Green, we decided to give it a miss and continue on a further 35nm to Magnetic Island. By our estimates we would reach there a couple of hours after dark.

Arriving at night is not our usual M.O. but we’ve sailed around Magnetic Island a few years ago and Horseshoe Bay is an easy anchorage to enter. Also, our bearing from Cape Bowling Green to Magnetic Island was a direct route.

We sailed the entire distance on less than 20knot winds and arrived in Horseshoe Bay just on 8pm just as the wind started to increase. The last hour of our trip was spent monitoring a large ship entering the port of Townsville. The skipper obliged us by turning to port and passing behind us allowing us to sail on by.

Today was very blowy so tomorrow we plan to arrive at the Breakwater Marina in Townsville and stay a week to get a few jobs done and catch up with another mate. It promises to be 27 degrees during the week – yay!
I’ve managed to squeeze in a couple more books in between my very busy schedule. A book by S.J. Watson, Before I go to sleep, tells the tale of a woman who has had amnesia for over 20 years and wakes each morning not knowing who she is or where she is (sounds like me when the anchor alarm goes off at 1.30am!). Not a bad read and apparently a movie will be made of this soon. Another sailing book I’ve read was Living a Dream: A journey from Aide to the Chairman of the Joint Chiefs of Staff on 9/11 to Full-Time Cruiser by Suzanne Giesemann. A short book, and I could relate to her desire to give up a career to go sailing. The book stems around the decision to go sailing and make the most of her life after 9/11, but ultimately reconsidering whether this was the right choice for her to make. At present I’m enjoying A Simpler Life by Peter FitzSimons. I’ve a few other books on my Kindle silently waiting for their turn to be read over the coming days.

Sailing the world aboard Blue Heeler
View all posts by blueheelerhr39 →
This entry was posted in 2011, Australia. Bookmark the permalink.
Loading Comments...
%d bloggers like this: