By the time we’d reached the north end of the Hinchinbrook channel, the wind picked up from the east giving us a beam reach all the way to Dunk Island. Blue Heeler heeled 20 degrees soaring along at up to 8 knots at times, making the 30nm trip very swift indeed. We reached Dunk Island by beer-o-clock and settled in for the night.

A major tourist destination last season, Dunk Island is now sadly deserted. Destroyed by Cyclone Yasi in February, danger signs located intermittently on the beach suggesting boaties shouldn’t land on the island. We could see the devastation of the island and damage to the resort so we didn’t venture out. The surrounding islands are similarly wrecked.

We departed Dunk Island early a day or so later with the aim of sailing four hours to Mourilyan Harbour some 22nm north. The wind was very light and we managed a measly 3.5knots until we put the spinny up, increasing our speed to around 4-5 knots.  As we were approaching Kent Island in the North Barnard group of islands I suggested to Wayne that since the weather was expected to be fair we should consider anchoring between Kent and Jessie Islands, rather than the harbour. With our glorious spinny billowing out, Blue Heeler sailed between the narrow passage of Kent Island and the rock bommies to the east. At the bow, Wayne dropped the spinny and prepared the anchor while I helmed and inched our way closer to the anchorage. The beach was steep and we could see coral bommies between us and the beach. I opted to stay out in 7m of water, leaving us plenty of swing room should the wind change overnight. Planning to stay one night only, I was eager to get the dinghy off and go look at the beach and take in a swim.

We worked quickly to get the dinghy off, placed the outboard in position and after some lunch, filled the boat with goggles, flippers and although not around this time of year, I loaded some vinegar in case of stingers. If anyone is going to get stung, it’d be me! Not taking any chances, I donned my stinger suit – a black suit made of lightly woven cloth – and looked like some sort of weird tropical ninja! I put on my goggles and flippers and flipped backwards from the dinghy into the warm tropical water. 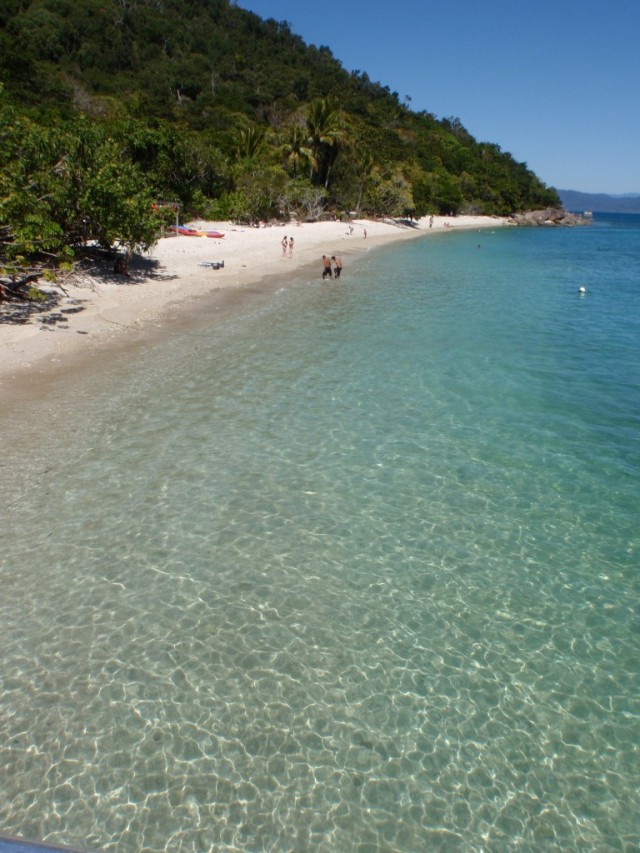 Visibility was poor and although I tried to see the direction of our anchor chain, I could see neither the chain nor anchor. Wayne’s had trouble with his ear again and decided not to swim, so while he stayed in the dinghy, I snorkelled around the bommy for a while and took heaps of photos. The curious fish swam by with puckered lips before darting off towards the safety of the coral heads. Sadly, the coral wasn’t particularly stunning – I expect Cyclone Yasi had something to do with this – although there were moments of colour that shone through the murky water.

To get back on the dinghy, I swam fast, kicked my fins and soared out of the water onto the edge of the dinghy something like a seal at Sea World. Paddling across to the next , I once again flipped over the side of the dinghy (now that I remember, I think Wayne pushed me this time!).  This bommy was much bigger and the water was still a little murky.

The next day, we sailed the short five miles from Kent Island into the safety of Mourilyan Harbour. With views of the huge sugar facility, conveyors and wharf, I took some time out and spent a couple of hours completing our tax returns! What would we do without the internet!

I received a Skype call from my nephews’ mum, Mandy, and it was great to be able to see her and speak to her through the iPad. It’s great when I can chat to family; even better when I can see them.

Friday’s forecast had eased to 20/25 knots so we left Mourilyan Harbour for a 45nm sail to Fitzroy Island. The wind blew steady and we sailed all the way. The winds were pretty strong, so in case Fitzroy Island anchorage wasn’t calm enough, our contingency plan was to continue on around Cape Grafton. As it turned out, we could see the anchorage which looked calm enough and decided we would stay at Fitzroy Island for a couple of days. I was on the helm as we turned to the east and headed towards the anchorage. Being mindful of wind bullets ripping down the hills, a bullet ripped down and hit us beam on resulting in Blue Heeler veering wildly to starboard! To control Blue Heeler, I eased out the mainsheet, remembering that Wayne was casually sitting on the rail on the port side. Any more heeling would see him over the side in a shot although once the mainsheet was released, Blue Heeler came around. After the nine hour sail, we anchored in 12m of water on the fringe of the reef. With blue skies and 27degrees, it wasn’t long before we were in our togs jumping off Blue Heeler into the refreshing water.

Fitzroy Island is one of the most scenic places I’ve visited so far on our sailing trip, with turquoise water and visibility around 10m. I’ve never had a holiday on a tropical island, except perhaps for Hawaii some 20 years ago. I’ve been spoilt for choice lately but Fitzroy is by far the best I’ve seen.

The next day with the dinghy off and snorkelling gear and towels on board, we were soon motoring across in search of our usual booty – Maxibon ice-cream!

The small general store didn’t let me down and I was in there like a shot buying one for each of us! After our creamy treat we motored along the beach and found a nice spot to rest awhile. After warming ourselves in the sun, we donned our snorkelling gear for a swim to check out the coral reef just offshore, before returning to the beach to warm ourselves up again. Whales could be seen swimming way off in the distance. We’d had enough sun so decided to return to our floating home. As we looked up we were alarmed to see a yacht supposedly anchored to windward drifting uncontrollably towards Blue Heeler! Thinking it was going to hit our boat, we sighed relief when the owners popped their heads up, turned on the engine and pulled away to anchor elsewhere. Phew! 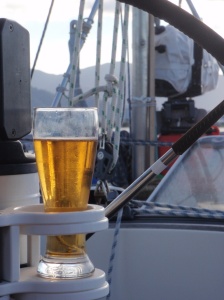 Today we sailed along with 25 knots from Fitzroy Island to the outer anchorage at Cairns. At times the wind bullets raced down the hills and hit us beam on, at times over 30 knots. After the 15nm trip we pulled in and dropped anchor in 6m of water. The wind still blew around 20knots but eased off in the evening. It promises to be 25/30 knots for the next couple of days starting in the wee hours of Monday so we’ll hang out here for a few days. We were delighted to see the locals put on a fireworks display as part of the Cairns Festival. I took some pics but it’s a little tricky from a moving boat…

Sailing the world aboard Blue Heeler
View all posts by blueheelerhr39 →
This entry was posted in 2011, Australia and tagged Australia. Bookmark the permalink.
%d bloggers like this: