Anchored outside the marina in Trinity Inlet, Cairns

We almost don’t have to check the weather forecast as we can pretty much guarantee a S/SE 20/25 knot wind every day! Anchored on the outer of Trinity Inlet, we’ve spent a few days here in Cairns soaking up the sun and waiting for the wind to blow over to a more comfortable 15/20 knots before moving further on.

Great to catch up with Melbournians Chris & Shaun

Yesterday we took a walk half an hour out of town to buy some parts for the boat (starting to sound familiar?) and caught the bus back to the city area to catch up with Chris and Shaun from Melbourne. After hugs and kisses, we caught up on the news over a couple of pints at Rattle’n’Hum on the Esplanade before saying farewell and motoring the dinghy back to Blue Heeler before dark. It was great to catch up with some familiar faces! 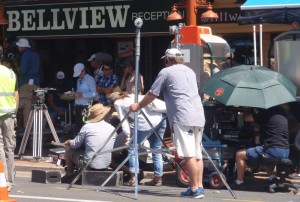 Cairns is a happening place – heaps of tourists all sunning themselves on the green grass next to the pool area overlooking the muddy banks of the shallow inlet. There’s definitely no beach swimming in Cairns! An ABC series called “The Strait” is being filmed in Cairns between June and September so we watched a bit of the filming on The Esplanade which included a scene with Firass Dirani. He’s the guy that played John Ibraham in Underbelly. Not Brad Pitt, but hey, this is Cairns!

Cairns 14 years ago didn’t look as it does today. If it wasn’t for the summer wet season, it’d be a nice place to live. There’s plenty of good shops and things for tourists to spend their money on. I took my credit card out today to make sure it hadn’t crusted over with salt. It still works (ka-ching!). One can never have too many pairs of togs!

But our stay here has come to an end. Tomorrow we plan on sailing over to Michaelmas Reef as the forecast suggests the wind is easing. The reef is about 22nm offshore just north of Green Island. We’ll drop the pick for a few nights so we can enjoy some swimming on the reef. There’s a few other places well stop at over the next week or so on the way to Lizard Island – Low Islets, Hope Island, Cape Flattery, Cooktown.