After Easter we departed the anchorage at Mooloolaba and motored through the increasingly perilous harbour entrance at 4.30am – the bar now down to 0.6m LAT. The goal to reach the notorious Wide Bay Bar – entrance to the Great Sandy Strait south of Hervey Bay – by the next high tide. 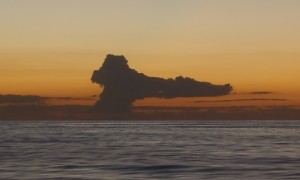 A steady sail had as arrive just on dusk with enough time to get to Pelican Bay anchorage before nightfall. The next day we had a short sail south into Tin Can Bay where we had a welcome anchorage north-east of Norman Point for a couple of days. The public jetty near the Coast Guard is probably the best place to tie up dinghies. The alternative is at Norman Point, but once the tide goes out it’s a long way to the waters edge. We left our dinghy while we took a walk around the town, stopping to buy a loaf of bread and some crab pots. I was pleasantly surprised with the facilities in the town; we even popped into the library to look up local historic information.

The next day we had a great sail north to Gary’s Anchorage, halfway up the strait; the following day another pleasant sail to the north-west point of Fraser Island at Moon Bay. The anchorage here is quite exposed and the weather was fine until the wind started building in the wee hours. We took advantage of the wind and sailed the 50+ miles to the Burnett River, Port of Bundaberg. The entrance here is easy and with our previous waypoints from last year, we knew where to anchor. Once again at dusk we set the anchor up river of the sugar terminal.

The following day the weather calmed and we decided to leave and head towards Lady Musgrave Island, some 60nm north-east. Deciding to sail overnight to make the most of the fine weather, to our dismay we had to motor the whole way. We left the Burnett River at 3pm even though we didn’t need to be at Lady Musgrave until high tide the following morning. So we motored at a slow 3.5knots – mind you a much better idea than being eaten alive by sand flies at the Burnett River.

We entered Lady Musgrave at around 9am and there were three catamarans and two monos already anchored, plus a few stink-boats fishing in the outer reef. Once again we took advantage of our previous visit and headed for our anchor waypoint. Most of the other boats anchored quite some distance from the island, and although we were the closest we were still a good dinghy ride away.

We were blessed for the next three days with lovely 10-15 knot winds and water warm enough to snorkel on the inner reef without wetsuits.

The island is typical of the area – thick with mangroves and filled with a variety of cackling, squawking birds – terns, shearwaters and so on – the island had the heady smell of bird poo.

A couple of locals

Fellow yachties Ian and Tina from the cat Midnight Blue invited us over and we enjoyed a cuppa and lovely slice (thanks for the recipe!).  We were visited by the Water Police and Customs who were checking out all boats in the area. I reckon they had their fishing rods hidden just out of sight for the trip home.

ANZAC Day was departure day as the wind expected to reach up to 25knots the following days. Lady Musgrave in 25knots isn’t pleasant so we hoisted the anchor and head on a course of 304°T – more or less straight towards Island Head Creek over 140nm away. With the three hourly watches in place, the wind gradually increased to 25knots at around 3am on my watch, but it wasn’t until 4am until Wayne came on watch and we shortened the sails and had around 30knots up the bum blowing us steadily to Island Head Creek, surfing down 2-3m seas.

Following directions as laid out in Alan Lucas’s ‘Cruising the Coral Coast’ (aka the cruising bible) there was no apparent reference to entering the creek during a big sea so we cautiously made our way closer for a peek. If it looked too rough to enter we had an escape route and would continue north to Scawfell Island, another 130nm away. As it turned out the waters eased nearer the entrance and the 50m depths suddenly reduced to under 10m. Wayne carefully steered Blue Heeler to the right side of the creek near the two large rocky outcrops, while I kept an eye on the depths and navigated via chart plotter and information from the cruising bible. Another boat, ‘U4IA’ had also reached the entrance at around the same time as us and followed us in. As we hadn’t been here before we had hoped to follow them in!

All quiet within Island Head Creek

Out of the wind onto flat water, we motored the 5miles to a secluded arm of the creek where we dropped anchor. After a couple of hours sleep, the crew of U4IA, Bilby and Cindy, came across to Blue Heeler later that afternoon for a chat and nibbles.

That was Thursday 26th April. Today is Monday 30th and I’m itchy! I have sand fly bites all over me – even behind my ear – and they’re driving me nuts. I don’t scratch if I can help it, but it’s not easy… If anyone has any home remedies let me know.

Saturday was very rainy so we stayed indoors and I did a batch of baking and washed some clothes.

Yesterday we decided to get off the boat as the weather had brightened up and took the dinghy for a spin with the fishing line trailing out the back.  Although it’s hot, we can’t go swimming here cause of the crocodiles (apparently they’re out there). We each caught a fish although too small and suitable only for bait. As the small fish slowly drowned in warm soupy salt water, sad calls emanated from the bucket making me guess we’d caught a couple of Trumpeter fish. It’s a ghastly business this fishing!

So we still have lots to learn about fishing, and until we do, for dinner we had a yummy dish of lentil curry and rice! Wayne wasn’t too impressed with the meal selection, but hey, sometimes yachties can’t be choosers. Now and then I tease him when he asks “what’s for tea?” by saying something like “400gm rump steak drizzled in pepper sauce, a side of wedges, washed down with one, or two bottles of Pepperjack Shiraz, followed by lemon meringue pie and finally, a drop of Jamesons“. I’m having a flashback to a prior life…

With that in mind, we’re keen to get out of here (still itching) and with the weather easing on Wednesday we’ll probably do a run either direct to Airlie Beach or bypass the Whitsundays and go direct to Bowen. It’s the first of May tomorrow and that brings some pressure to round the cape within five weeks, allowing a couple of weeks to get to Darwin from there.

And for tonight’s dinner, leftover lentil curry with polenta bread! Until next time…

Sailing the world aboard Blue Heeler
View all posts by blueheelerhr39 →
This entry was posted in 2012, Australia and tagged Australia. Bookmark the permalink.