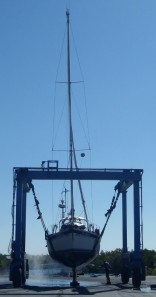 Blue Heeler getting a washdown

The haul out area once the tide drops 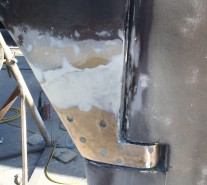 The skeg was in need of some fibreglassing repair 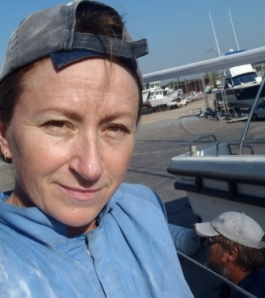 Ally taking a breath in between jobs.

Ally sanding the bootstripe in preparation of painting

Darwin: a hectic five weeks of hard work, tears, sweat, laughter, swearing, heat and itchy bites. But let’s return to my last entry from the top of Arnhem Land…

From Cape Stewart we sailed over to Entrance Island outside Liverpool River were there was a group of indigenous folk camped on the island. As we approached the southwest corner to drop anchor, the matriarch of the group was shouting across to us. I couldn’t understand what she was saying although I expected it was something like “Hello, welcome to the Liverpool River”. Although Wayne could hear what she actually said which was “F*#$ off outta here”. So with the welcoming formalities out of the way, we dropped anchor as the sun dropped below the horizon and we settled in for the night. We dismissed any plans to dinghy to the island in the morning to share a skinny latte and raisin toast with our neighbours.

The following morning, we farewelled the Entrance Island welcoming committee and sailed around the top of Cape Cuthbert in a north westerly direction to North Goulburn Island’s Mullet Bay for the night. From Mullet Bay we sailed to Malay Bay for the night; the following day to Somerville Bay around the top of Cape Croker. Still helming due to no autopilot, we arrived at Port Essington on Wednesday 13th June and anchored outside the Black Point Ranger Station some distance offshore and to the west of the jetty in fairly shallow water. Luckily the wind was quite light so we had a good sleep and the following morning dinghied quite some distance to reach the shore and to check out the cultural centre. We met Alan the OIC of the ranger station and his mate, Andrew. Alan enlightened us with information about the area and the Garig Gunak Barlu National Park before we headed off on a walk to the cairn at Smith Point some 3-4kms north.

We could see Smith Point as we sailed in and I was pleased to stretch the legs. We decided to walk along the beach on the return journey, although cautious to keep an eye out for crocodiles. I was busy looking for interesting bits of coral and shells, while Wayne walked ahead looking for crocodiles when he yelled “look over there”. In the water about 100m away was a large crocodile! At first it looked too dark, perhaps a large log, but it swam below then pointy spikes of its tail appeared out of the water. I took some photos and it’s clear that the croc must have been around 4m long. Now every shadow looked like a croc!

Back at the boat ramp I washed the ochre dust from my feet and splashed my face with cool water before jumping in the dinghy and returning to Blue Heeler. We hoisted the anchor then motored south towards the Victoria Settlement anchorage. Victoria Settlement has the stone remains of the beginnings and endings of a township that couldn’t survive in these conditions. The settlers remained for only 11 years; most of them dying eventually by dysentery or disease. We were up early the next day and walked around the very interesting and remarkably well preserved ruins. The settlers must have been tough buggers to last 11 years in that hot, wet, miserable lifestyle which finally broke them in 1849. As it was in the two hours we were there, I was bitten by an ant; Wayne was chased by a snake; a large shark was circling our dinghy as we tried to get in! After our trip ashore we headed north again to eventually come to Coral Bay, where the Seven Spirit Wilderness Resort is located. We left Coral Bay at Port Essington and headed the 25nm to Alcaro Bay where we would stay for a few hours. After reviewing the tides and current information, we agreed that rather than wait for a suitable tide to leave during the day, we’d leave at midnight, which would be 5 hours before Darwin’s high tide. By the time we’d reach the westerly turning point on the voyage (north of Cape Hotham), we would ride the SE flood and pickup the NW ebb and ride that. We had a nap in the evening and were up in pitch black darkness getting ready to depart at midnight.

With no moon, just the flash of the Cape Don lighthouse every 12 seconds, we carefully motored out of Alcaro Bay into the awaiting current. It was a light wind so I wasn’t expecting much drama, however, the speed of the current surprised me. I had read that the current can get up to six knots, although I thought that must be at the extreme. We had 5 knot current with us so we scooted along at over 10 knots for at least a couple of hours, after which time it reduced slightly so that we travelled at 8 knots reaching the Abbot Shoal area in remarkable time. This was good for us so rather than pull in to Adam Bay on the west of Cape Hotham, we decided to continue on to Darwin, as we would probably reach there in daylight.

Still hand steering, we motor-sailed all the way to make the most of the light winds and make sure we could reach Darwin in good time. We took one hour watches so the other could have a rest, as we hadn’t slept since the night before. We passed between the East and South Vernon Islands where the NW ebb tide was building and a light 1-2 knot current floated us along at 7 knots. The final 25nm was to ride the flood tide into Darwin. As it turned out the wind picked up so we had a few hours battling into 25knot winds although we had a current helping us along. We arrived at Fannie Bay, Darwin, by 1500 on Sunday 17th June – a 15 hour trip from Cape Don.

So back in civilisation it was time to once more give the credit cards a workout. Our to-do list was getting longer by the minute and we set about getting things in motion for our overseas trip. After sailing two weeks with no autopilot (albeit we had fair weather), it certainly is not a luxury item but one of those ‘must haves’. It’s not easy to set the spinnaker with one person unable to leave the helm. I was also responsible for sorting out blue water insurance, which does my head in, but had to be done nonetheless.

We decided to haul the boat out on the basis that we needed to antifoul but would probably require a survey before we could get insurance, plus we could spend some time fixing those things that need to be done out of the water. The boat was hauled out at the Spot On boat yard in the Ludmilla Creek – accessible only at high tide.

I’d booked a flying visit to Victoria to see my family and while I was motoring around Victoria, Wayne stayed behind to begin repairing the hull and keel. I was so happy to see my family motoring between Gippsland, Bendigo, Benalla, Healesville in a few days to see them. I was especially happy to visit and hug my tall nephews Matthew and Tim. While some days living on a boat can be tough, their brave battle with Niemann-Pick Type C keeps me cognisant of their daily struggle with this terrible disease – I have it easy and I never forget that.

I would have loved to stay longer in Victoria and visit friends and other family, but time was against me and I returned to Darwin to find the boat in complete disarray but with the hull repairs in good order and plenty of items on order. Wayne had worked extremely hard to replace fibreglass on the skeg and prepared the hull for antifouling. He’d also located a new Raymarine autopilot but because the price was higher in Australia with no guarantee of delivery within three weeks, he opted to buy it for less from the USA and it arrived within one week. The next couple of weeks we were busy with the main jobs being: antifouled the boat; replaced zincs; installed a new autopilot; replaced all head hoses to remove the odour from the boat; greased all winches; repaired gelcoat scratch on hull; repainted the boot stripe; replaced old boat stickers with new ones; sewed patches on the genoa; cleaned the topsides; cycled around Darwin and outer suburbs to various suppliers to pickup parts. I even managed to secure blue water insurance without the need for a survey. The survey we had done four years ago would suffice. Unfortunately an Australian insurance company would not insure us without a current survey plus the fact that although I had over 7000nm sailing experience including crossings of Bass Strait and the Gulf, I had no overseas sailing experience so they wouldn’t insure us. I told them in a couple of weeks I would have overseas experience sailing to Indonesia, but that wasn’t good enough. So once again I sent my hard earned dollars to an overseas company. Westpac Bank’s exchange rates were not good as OzForex and I saved about $400 on insurance premium due to better exchange rates and no fees. Although we give Aussie providers the first opportunity they continually let us down with exorbitant prices which force us to shop overseas.

In the midst of all the work, we also had to arrange our Indonesian Social Visas, got to Customs, vaccinations, tax returns, get some Indonesian currency, fill the tanks with fuel (which we got duty free for 95 cents per litre!), and provision the boat. We managed to fit in an evening at the Mindil Beach Sunset Markets and an afternoon at the annual Beer Can Regatta.

Blue Heeler was launched at high tide on Thursday night after which we motored the short distance to Fannie Bay where we’d spend the remaining days in Darwin. Now that we’re out on the water again, it’s much more enjoyable with no midges and cool evenings.

Last night we attended the Sail Indonesia Rally BBQ at the Darwin Sailing Club and chatted to others we’d met on the trip from Lizard Island. After a huge feed we left by 9.30 to dinghy back to our boat in the darkness. So today we finally have a lazy day! With only one week to go it’s disappointing that we have no time to visit Kakadu, but at least our loo smells nice and the hull is clean and ready for sailing!

We still have a bit to do – I still have to buy fresh food, dairy and meat, plus some canned supplies to take with us. I was dismayed to find out that four litre casks of wine aren’t sold here in Darwin so given that we don’t really want bottles rattling around (sit down for the following statement) we have decided to forego wine for the trip! That is not a typo…

Our final week will be busy with a rally technical briefing on Tuesday followed by Customs clearance on Friday and we leave for Indonesia on Saturday. In between we’ll try and do some last minute sight seeing, focus on our Indonesian phrase book and get ready for a four day sail to Kupang. Our internet access is unknown at this stage so I’ll attempt to blog when I can, with the next entry hopefully from Indonesia – I hope you enjoy reading the entries.

Sailing the world aboard Blue Heeler
View all posts by blueheelerhr39 →
This entry was posted in 2012, Australia and tagged Australia. Bookmark the permalink.