Boats, Beaches and Boxes of Bintang 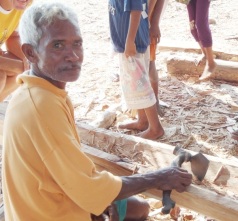 From the harbour of Kalabahi, Alor, a flotilla of about 12 yachts each travelling at different speeds due to size, shape and sailing ability, with Blue Heeler sitting in the middle of the fleet. We travelled under motor due to light winds 57nm to reach the small village of Balurin; scenic countryside, but the village from where we could see was dirt poor. The dog-leg into the anchorage was a little tricky, and the small anchorage is deep at around 20m+ and plenty of coral bommies looming from the depths below ready to tear into our hull and keel.

In the morning I was greeted by a man and his two boys in a canoe, seeking goodies from the obviously much wealthier yachties. He didn’t have anything to barter but he was keen for a pair of goggles so I gave him an old pair of swimming goggles and a couple of collared shirts for his boys. He seemed pleased enough and we could see him trying them on as he paddled away. We left the following morning looking for a piece of paradise and after a bumpy night at Siru Merangwutun in the bay Telok Lewaling, we chose the anchorage at the north east of Adunara Island (anchorage number 10 in the book “101 Anchorages”). The amazing clarity of the water allowed me to see the anchor hit the bottom at 20m below. It wasn’t long before we were in swimming around. The channel is around 25m then sweeps up quickly to 5m then very shallow around the sand cay. The local village of Mokko is about 1nm from the anchorage, south of the tiny sand cay. Fishermen approach us each morning to sell banana (pisang), papaya and fish (ikan). An old guy comes each morning and the first day I bought banana and papaya from him for 7000 (about 70c) and also gave him a hat. He came the following day and I bought a nice tasty coral trout from him for about $2. Bargain!

The next day Wayne, myself, Steve and Ann from ‘Recluse’ dinghied to the small village in search of a pasar (market), allegedly one was to be held this particular morning. When we arrived I asked “Di mana pasar?” to which the young kids on shore pointed to a couple of women sitting nearby under a shelter. On their rugs they had few bananas, papaya, very small cherry tomatoes, small fish and some plastic rubbishy nick-nacks. We bought all their bananas, tomatoes, and papaya then asked where the school was, but learned it was a school holiday that day. Next to the pasar, an old man with an axe was skilfully fashioning a canoe from a long log. Our third night at the anchorage near Adunara Island prompted Steve to hold a yoga class. I was keen to join in, as were others who in a former life were regular class participants. On the tiny sand cay at low tide (and fortunately half an hour before drinky-poos) about six of us saluted the sun and posed as warriors until we had stretched each tendon and muscle just enough to enjoy the sunset and company.

The next day we returned to the village of Mokko as we were told the school would be open. A few yachties dinghied to the banks of the village to be greeted by young men and boys. Interestingly, but not unusually in this part of the world, each of the young guys had mobile phones, bling (albeit cheap stuff), and one had a very trendy mohawk looking haircut. They looked very ‘hip-hop’ to say the least. One had earphones in his mobile phone listening to a tune I’ve heard before, but couldn’t quite place. While in the background stood dusty looking barefoot women with equally dusty and snotty nosed children perched on their hips.

We made our way to the sekola (school) and apologetically interrupted the classes while the kids squealed with delight at our return as promised the day before. A large bespectacled Muslim woman appeared from the classroom. Obviously the teacher but evidently knew no English so she guided us to the next classroom where a uniformed teacher came out to greet us. He said “Do you know how to speak Indonesian?” but unfortunately that was all the English he knew. So I practiced my limited Indonesian with him and expressed that we had come bearing gifts of exercise books, pencils, toys and clothes for the school to share among the children. We took photos and I signed their guest book – 15 August 2012, Alison “Pelaut” (Sailor) S.V. Blue Heeler, Australia – which I was delighted to do given the last entry was December last year! One thing that really impresses me so far in Indonesia is that no matter how dirt poor they appear to be, the school children are all smartly uniformed and the teachers also present themselves well. They clearly take pride in education and it certainly shows. We thanked the gurus then made our way back to the dinghies while the children returned to their studies. We farewelled the young boys, who were eagerly taking photos of us on their phones, then returned to the boats.

Since leaving the Adunara Island anchorage, we’ve enjoyed a couple of great stops, plus a poor anchorage at Telok Hading where we chose to leave at midnight as the wind swung around and had us placed over some shallow rocks. One such good anchorage was at a small village on Pulau Besar – a great stopover for a couple of nights, although during a swim Wayne managed to get spiked by a sea urchin leaving him with a few spiky splinters in his foot. From Pulau Besar we motored the short 15nm to Wodong and anchored outside a backpackers dive resort – Ankermi Happy Dive. Fortunately only the three other boats with us were anchored and there was plenty of depth on black sand, plus calm water to relax for a couple of days. As a group we went to dinner at the resort restaurant – a treat in this part of the world – and enjoyed a full Indonesian buffet for around $7 each. The vegetables including rice are freshly grown on the property and were wonderfully prepared and very tasty.

Our plan after leaving Wodong was a 25nm day to the anchorage outside Sea World Resort, 5nm east of Maumere however there were already 15 boats anchored and due to the depths in the anchorage upwards of 25m, we couldn’t get out pick down in less than 30m of water. Rather than spend the day worrying about dragging, Wayne and I left our mates and sailed away, first past the port town of Maumere which didn’t look appealing, then onto a secluded anchorage at Batu Boga east. On our own for the first time in weeks, we enjoyed a quiet, calm anchorage before departing early the next day to the small village of Mausambi. With information provided by departing yachties, we made our way into the small and calm anchorage behind the breakwater. Here we would enjoy three days of swimming, markets and a tour of the Kelimutu crater lakes a couple of hours drive away. The rally information is confusing and it seems that although this should have been a rally stop with festivities, the locals hadn’t organised anything for passing yachties. Nevertheless, a local fellow by the name of Vincent spoke very good English and organised tours for 10 people in the back of his brother’s truck! We joined a group of others on a trip to the colourful crater lakes, stopped for lunch at a small restaurant ($2 for a meal of mie goreng ayam), and visited a fresh vegetable market where we could buy carrots, choko, potatoes, tomatoes, oranges, mango, cabbage, garlic and other fresh veggies. Stopping on the way back to Mausambi at a local village we bought some dried coffee beans and cloves which were drying in the front yard. As the beans needed roasting, Vincent said his mother would roast and grind the beans for us! Back at the boat, Vincent also arranged fuel for us (which worked out to be around IR5500 – about 55c per litre – quality unknown as yet though).

The following morning we were guided around the local market at Maurole followed by a flock of children shouting “Hello Mister” or “Hello Missus”, while a couple of young girls freely held my hand as we walked around. Although a Saturday, the school children were given the extra-curriculum activity of interviewing yachties. They wanted to know our names, where we were from, why we were there, our favourite animal and hobby. Hard to be anonymous in this part of the world – Vincent said we were like rock stars! Back to the dinghy, the throng of children squealed and waved us goodbye and I had to laugh.

Vincent invited us to meet his family and to stay for lunch. We gladly accepted along with Rob and Jill from the Melbourne yacht “Jolie Brise”. Vincent’s wife, Jacinta, presented plates of fish soup, cooked beans and rice, fish and coconut curry and cooked veggies. We also tasted the local arak – a type of rum that more closely resembled sweet metho. It was a feast for us and with spoons only (they had no forks or knives) we enjoyed the tasty meal. While we ate, Vincent’s mother, Maria, roasted and pounded the coffee beans while his father sat grinning with beetle nut stained gums and teeth. We met Vincent’s children, Gabriella, John Paul and Alexander. The majority of people in Flores are Catholic due to the Portuguese heritage, although the Muslim community lives in peace within the villages. I needed fresh eggs so Vincent took me across the road to his neighbours farm where I bought eggs fresh from the chickens. The day before I bought eggs from a village market only to find later that day they were hard boiled!

As a gesture of appreciation, I’d baked a date loaf for his wife, presented a jar of Beechworth Honey from Australia and gave the kids small Aussie Koala souvenirs. That evening we enjoyed a catch up with Klaus and Lila aboard ‘Comedie’, then went across to ‘Jolie Brise’ for an ale with Rob, Jill and Ross.

With no wind we left the following day and motored the 47nm to one of the small islands north of the village of Riung. Once again we learned there would be no festivities in this village. Generally though the rally participants aren’t too bothered as we can make our own fun. Once such moment was a special announcement on VHF channel 16 by John from ‘Sea Mist’. With a witty edge to his Canadian accent, he announced “Calling all Bintang drinkers, Calling all Bintang drinkers: this is a public service announcement regarding the purchase of Bintang beer”. Moving quickly to a working channel, John shared with his expectant audience that he’d managed to agree a good price for boxes of Bintang in Riung and whoever wanted to buy some could join him the following day to haul boxes back to the fleet! With the village 2nm away from the anchorage, only those with boats capable of planing that distance would carry a posse of keen beer-drinkers (including Blue Heeler’s captain) to return with boxes of Bintang beer for their thirsty crew.

In a few days we’ll continue to Labuanbajo to enjoy some diving and site-seeing around Komodo and Rinca Islands.