Wayne taking a drink from the Merlion 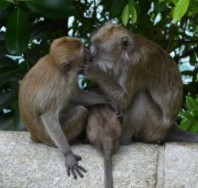 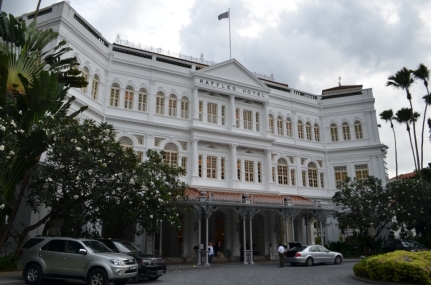 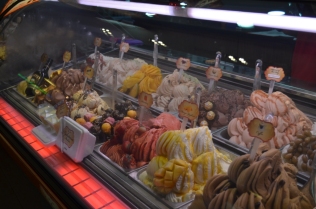 Even the ice-cream is tidy in Singapore! 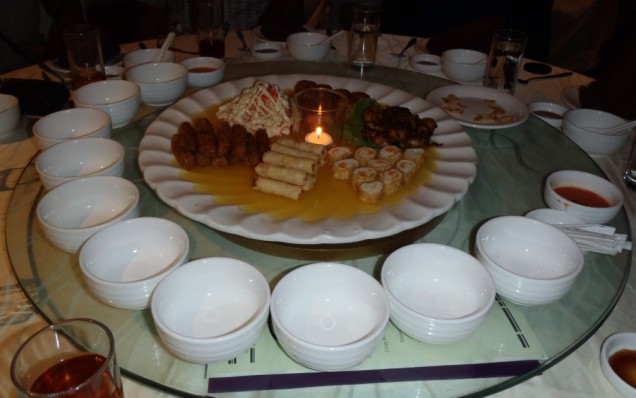 Well presented and tasty cuisine at the Rally Dinner

After our jaunt to KL, a couple of days back aboard Blue Heeler at Danga Bay, we travelled by bus to Singapore. It’s an easy crossing – a bus into Johor Bahru (JB), a walk through City Square across JB Sentral train station, then onto CIQ (Customs, Immigration and Quarantine) where our passports were stamped out of Malaysia. We boarded bus number 170 (RM2.20) which then drove us over the causeway to the Woodlands customs in Singapore, where we would alight the bus, proceed to immigration where our passports would be stamped into Singapore. We held onto our bus tickets so we could board bus 170 once through immigration and continue the journey to the Queen Street Bus Terminal in downtown Singapore. The 170 bus makes regular stops so it’s a little slower than the express bus.  The travel from JB to Singapore took about one hour as it was during the day (Monday). Apparently in peak times, the trip can take up to three hours. On weekends, many Singaporeans come across to Malaysia as it’s so much cheaper, but the crossing is horrendous.

The SMRT train network in Singapore is superior to any I’ve travelled on. Recently the platforms have installed safety panels that prevent travellers from falling onto the tracks. The network is seamless, efficient, clean and good value, with a three day tourist pass costing only S$20 for unlimited bus and train travel. The Queen Street Bus Terminal is a 10 minute walk from the Bugis station and from there we could travel the broad network anywhere around Singapore. One of Wayne’s mates lives in Singapore and kindly invited us to stay (which was very welcome!). But as he wouldn’t be home for some time, we used the afternoon to wander through the colonial section of Singapore over to Raffles Place in the business district, admiring the orderliness or the city and the chic men and women. Not a leaf is out of place in Singapore. Phone booths are clean, no graffiti, nor is the glass smashed or scratched. There’s no rubbish scattered under bushes or blowing in the streets. It is surreal and almost unreal. I set the challenge to Wayne to find at least one bit of graffiti, even a small ‘tag’ but even after four days he couldn’t find any in the city area.

After spending the past three months in Indonesia and Malaysia, both unfortunately have a colossal problem with garbage, the squeaky-cleanliness of Singapore was refreshing, but slightly disturbing. After speaking to other yachties, they also felt Singapore was a little contrived and must have the dirty bits shoved in some far corner of the small island country; a bit like when someone comes to visit and all the laundry gets piled under the bed!

So what makes Singapore run so smoothly? Not sure. We saw no policemen, nor did we see any authoritative figures. I imagined that if someone drops litter or tags buildings with spray paint, evil dark images swoop from the shadows to swallow them up! Well that was my imagination running rampant, as it tends to do sometimes. Needless to say, I wasn’t game to drop my ice-cream wrapper on the ground to test my theory.

Wayne’s friend lived in a complex close to Harbour Front and Sentosa Island. Very handy and we managed to spend most of our time in Singapore merely admiring the layout of the city, the train network and the wonderful food. Of course we went to the Long Bar at Raffles Hotel. Singapore Slings cost S$26 so not wanting to drink sweet pineapple juice and a dash of gin, we opted for a glass of beer for S$20 each! As customary, we ate their peanuts (at least S$10 worth) and threw the shells to the floor for the peasants to clean up!

Luckily for us it was open day at the National Museum so we spent a few hours there soaking up the history of Singapore, before taking a bus ride out to the peaceful MacRitchie reservoir where we saw monkeys, lizards and ice-creams.

Sentosa Island is basically a big theme park/island. A monorail takes you across, or you can walk the boardwalk from Harbour Front. There are beaches to swim, although from the sand you can see hundred of ships waiting in the Singapore Straits. There are rides for kids, Universal Studios, a place to indoor sky-dive and much more. We were only there for a look and didn’t stay all day, opting to catch up for lunch with friends Claes and Laila near the Merlion statue.

Exiting Singapore was as straightforward as coming in. The express fare from Queen Street was S$2.50 (three times the value of Malaysian Ringgit, but still cheap). I’d recommend Singapore to anyone who wants a holiday – I’d suggest a week would probably suffice to see most things. We stayed only three nights but there was much more we didn’t see.

Back in JB, the disparity between Singapore and JB is glaring – shabby versus chic. For example, Singapore offers clean western-style public toilets with automatic flush and automatic taps to wash hands. In Malaysian public toilets, if there is a tap to wash your hands, it usually comes off in your hands! The floors of the Malaysian toilets are permanently wet and slippery due to the hoses they use for their toilets. I had a bad experience where a hose went off like a fire-hose, causing me to wrestle it before it squirted everything in the cubicle.  I must’ve looked like an idiot when I walked out laughing and wet!

Unfortunately maintenance does not seem to be a high priority in Malaysia. Although attempts to produce shiny new office buildings, plumbing and other services are mostly broken or in some state of disrepair. Footpaths are dangerous with missing tiles and man-hole covers. Building work sites are disastrous with piles of debris, unsafe practices and rubbish strewn around. The water at Danga Bay is filthy – rubbish, dead fish and all sorts of crap is constantly washed in and out of the marina on the tides. I sound like a harsh critic, however, this is the general consensus by those, like us, are visitors to this country. But the good news is it can only get better and Malaysia have a close neighbour to emulate.

The people here are friendly enough, considering we’re close to a city and a border. Often times, even this close to Singapore, I’m the only white woman in the shopping area. I like getting out on my own and I’ve had no problems so far. As we sail up the coast away from large cities, I’m sure we’ll meet more relaxed and friendlier people. I’ve bought a few books to improve my Malay grammar. My inadequate Indonesian is not quite cutting it and although many of the signs, packages, shops are all in English, it’s hard to find someone that speaks English fluently.

So now a quick word about sailing. There are about 55 yachts in the Sail Malaysia Rally. This rally lasts for around six weeks and has us travelling up the west coast of the Malaysian peninsula until we reach Langkawi in mid December. We may stay there over the Christmas season before heading further north to Thailand. Last night was the official rally dinner where we were served tasty local cuisine and joined by local VIPs.

Tomorrow we head north, stopping at Port Dickson where we’ll spend a few days. I’m hoping to take a bus to visit the old port of Melaka. Until next time….

Sailing the world aboard Blue Heeler
View all posts by blueheelerhr39 →
This entry was posted in 2012, Indonesia, Malaysia and tagged danga bay. Bookmark the permalink.
Loading Comments...
%d bloggers like this: