So there was this bunch of yachty blokes on a night out away from their galley wenches. As they approached a local mens club they were scrutinised by the bouncer at the entry. In the group were an Australian, Swede, German, Frenchman, Englishman, Dane, Indonesian, Philippino, South African, New Zealander, Portuguese, Spanish, Scot, Somalian, Ethiopian, Chinaman and Japanese guy. The bouncer looked through the group and said….”Sorry fellas. You can’t come in without a Thai”….!!

Christmas in Malaysia went down a treat. To my surprise, the local shops in Kuah played Christmas carols through the speakers; decorations were out in force; and Father Christmas made an appearance at the Rebak Marina Christmas Eve drinks. A good effort by the local Muslim community. Meanwhile, some of the yachties met for a Christmas breakfast of hashbrowns, eggs, tomatoes, and a secret stash of highly prized (in this region) streaky bacon. Christmas dinner was a sumptuous buffet at the Rebak Resort, with friends Brian and Gail (Dol’Selene), Claes, Laila and family (Comedie), John and Cheryl (Sea Mist), Mike and Nicki (Zen Again). After so much food, we stayed aboard Blue Heeler on Boxing Day with our swollen bellies for our annual viewing of Christmas favourites – The Australian classic ‘The Castle’ (Kerrigan family at 3 Highview Crescent, Coollaroo) and ‘Love Actually’ (Hugh Grant et al). I congratulate the staff of Rebak Marina for their fabulous job of celebrating Christmas and New Year with the yachties. Head Chef extraordinaire, Aisha, not only fed many hungry yachties on New Year’s Eve with an impressive buffet feast, she also managed to whip up a celebratory NYE cake, joined in the dancing with the yachties, and did a wicked impersonation of Michael Jackson!

Of course at Langkawi one must do the obligatory touristy things. On a day trip to the very touristy Pantai Cenang with Brian and Gail of Dol’Selene, after strolling around the many identical souvenir shops, I chose a fish foot massage where you place your feet in a large fish tank where small fish nibble the skin from your feet. I first asked how hungry were the fish cause I didn’t want to lose a toe, but all they did was nibble and tickle delightfully between my toes making me giggle. One of the best Indian restaurant I’ve ever been to is the Taj Mahal opposite McDonalds in Pantai Cenang. The food is wonderfully tasty, fresh and of course, reasonably priced. I know that’s a big call, but after three visits the quality of the food couldn’t be faulted.

But as we prepared for our departure, we refocused on what needed fixing to keep us going. With my Sailrite sewing machine, I spent a morning sewing new stitches and adding patches to chaffed areas on our Genoa. We’ll get another couple of years outta that baby! Fortunately Rebak Marina has a great under cover area to lay out and sew up sails. Wayne had finished all the work on the exhaust and watermaker, and done a regular engine service so it was time to continue cruising.

On 2nd January, we left Rebak Marina behind, and decided to take a tour around Langkawi before moving onto Thailand. First stop was the anchorage near the ‘Lake of the Pregnant Maiden’. Excellent place to anchor from NE winds and the lake is just a short dinghy ride and short walk to a fresh water lake for a swim. Watch out for the cheeky monkeys! After a day there, we motor-sailed north-east towards the ‘Hole in the Wall’ anchorage on the NE corner of Langkawi. This is an easy anchorage to enter although you can’t go too far past the T-junction where the various tourist outlets are on the northern arm. It was busy with tourist boats taking punters to view the local eagles so we followed them in our dinghy and watched as the tour guides threw food overboard to coax the eagles to dive and pick up scraps. Great place to take photos of eagles!

While other yachties had moved on quickly to Thailand to sort out getting work done on their boats, we decided to circumnavigate Langkawi Island and continued anti-clockwise around the top to anchor at the Telaga Harbour, before returning to Kuah for provisioning and clearance. Kuah isn’t as touristy as Pantai Cenang so it’s a great place for yachties. If you want it or need it done, there’s probably a place where you can buy it or get it done. Rather than bore non-yachty readers, I’ll prepare a list of our favourite places and put them on my ‘Other Bits’ page at a later stage.

So with our clearance done and my newly sewn Thailand flag (Miss Champness of year 8 needlecraft would be pleased), we headed WNW towards Ko Lipe. Here we checked in with Immigration for a fee of 500Baht (around A$15). We have a tourist visa so can stay in Thailand for up to 60 days. Ko Lipe is touristy and very different from Malaysia. It’s relaxed and there’s no pressure to be covered from head to toe in garb. It’s also the first place we’ve seen in a while where the water is so clear you can see the sea bed. A couple of days relaxing at Ko Lipe, we sailed to the west then headed up to Ko Rok Nok.

Anchoring overnight in 10m we managed to have our first decent swim since probably Komodo Island in Indonesia. From Ko Rok Nok we travelled the short 17nm NE to Ko Muk. Here we anchored near a small beach between two spectacular towering limestone cliffs. The drawcard for us at Ko Muk is the Emerald Cave or Morukut as the locals call it. To reach the opening of the cave, is a short 200m dinghy ride from the anchorage along the base of the limestone cliffs. To reach the hong (Thai for ‘room’) you need to enter a small cave opening and swim 80m through pitch black darkness until you reach the expansive opening within the limestone; the hong. It was spectacular and well worth the visit, but you must take a torch to do this; we had diving torches with us and we swam and towed the dinghy through the darkness at mid-tide; with the low roof it would have been difficult at high tide. We enjoyed Ko Muk so much we stayed for a couple of days; swimming, yoga and relaxing in the sunshine. THIS is what I’m talking about!

We raised anchor at 9am and sailed with our small baby spinny in a lazy 7 knot breeze for our next destination, the southern anchorage at Ko Lanta. As we rounded Ko Ngai the wind increased to over 20 knots. Time for baby spinny to come down and big genoa to go up! We dropped spinny and raised a full genny in time for a 25 knot blow on the beam, dodging many fishing flags along the route. With a helpful current, Blue Heeler reached a speed over ground of 9.4 knots as we sailed along towards Ko Lanta. As we rounded the south west corner of Ko Lanta the wind eased, but we were knocked by ‘bullets’ along the way as the wind tore down from the higher elevations. We stopped at the southern end of Lanta overnight, then continued the next day once more getting knocked by bullets up to 28 knots. The anchorage at the northern end of Lanta is only 10nm from the south. It’s a wide bay overlooking a sandy, touristy beach and can accommodate many, many yachts in a 5-10m depth on good holding sand. The resorts and restaurants along the beach accommodate the many European and Russian families and the local town of Saladan is an easy 2km walk or a short ride by Tuc-Tuc. In Saladan you can buy heaps of cheap Thai clothes, tasty meals or sign up for a visit to one of the local islands. On the way to Saladan is a good market offering heaps of fresh foods, herbs, chicken, fish, seafood and such. An unusual sight there was a table heaped up with pork ready to buy. Disturbingly in the middle of a table was a large pink pig’s head with eyes staring blankly into space and its tongue hanging out. Even more disturbing was a young Muslim girl starring aghast and big-eyed at the table of forbidden meat. Her mum gently grabbed her arm and swiftly lead her away.

We are using free WIFI so we haven’t yet had the need to purchase an Internet SIM card. WIFI is readily available at most places. No problem using ATMs either. The Thais cater for tourists very well, and always with a friendly smile, which they are famous for.

One thing is for certain is that there is no need to ask the locals “Where’s the best Thai restaurant?”. Every meal we have here is cheap, fresh, and tasty, as Thai food is renown for.

Seems like we’ll be using every minute of our Visa in Thailand. Until next time… 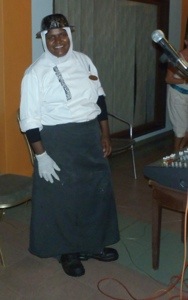 Ally tidying up the sails at Rebak

Eagles at Hole in the Wall anchorage.

a very Angelic eagle at Hole in the Wall, Langkawi

Lake of the Pregnant Maiden, Langkawi

North side of Rebak Island not immune to plastic bottles and rubbish. 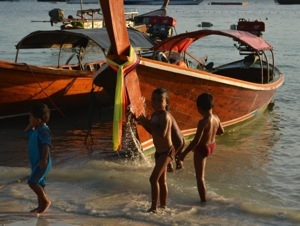 Anchorage at Ko Muk near the Emerald Cave

Just inside the start to the Emerald Cave. It was pitch black the rest of the 80m journey to the beautiful hong

A reminder of eight years before

THIS is what I’m talking about!

Locality of dive sites in Thailand

5 Responses to Kingdom of Thailand