Six weeks since we arrived at Boat Lagoon and the teak deck is finished. Our carpentry team reduced to one carpenter with two younger guys helping him sand the deck; one of them usually sings at the top of his voice with his headphones plugged in. 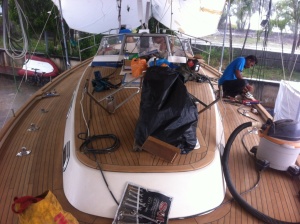 The deck hardware is being refitted.

After two days of mechanical sanding to smooth out the deck, it took a further three days of meticulous hand sanding and scraping for the deck to look superb! Friends Claes and Laila returned from Sweden to Comedie, a Hallberg Rassy that also had a new teak deck laid during the year. It’s been six months since we’ve seen them so we had a lovely dinner and a few beers, joined by solo sailor Lisa from Likuri.

Last week’s very brief blog comments regarding the rudder didn’t quite reveal the extent of the task. After waiting three weeks to have the Thorden bush machined by local firm Tavisuwan Engineering, Wayne inserted the bush into the rudder housing so that we could insert the rudder shaft. 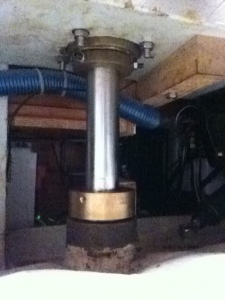 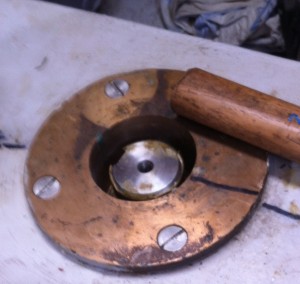 Top of rudder shaft – in place and smooth

Although the bush had easily fit on the shaft beforehand, now that it was squeezed into the housing, the inside diameter had reduced a fraction. A couple of hours later, we’d removed the rudder and Wayne extracted the bush, which needed the diameter increased a mere 0.3mm. On Monday we visited Manop’s engineering workshop in Phuket Town where he had one of his team machine out the bush to the correct size. By Wednesday, Wayne and I returned to the task of inserting the rudder using the same method.

Lower rudder skeg – hole was machined to fit the shaft

I wound the nut while Wayne was below positioning the rudder shaft. Within a short while the rudder shaft was sitting nicely in position. Hooray! But the job wasn’t finished.

Manop’s team also had the task of remaking a bronze locking ring and re-boring the bronze lower skeg rudder fitting. The two halves of the heavy fitting steadies the lower rudder shaft.

The original hole was initially machined out a further 2mm then built up with bronze to allow for re-machining to provide a suitable clearance around the rudder shaft. We were happy with the work but the tricky bit was to get it onto the skeg. 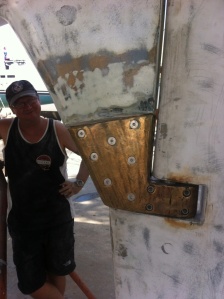 The skeg fitting had to be sandwiched onto the skeg using bedding filler the consistency of peanut butter. Once in place, seven 100mm bolts were put through the skeg while the filler oozed out of the gaps. Time was of the essence as the filler was going off (hardening) in the heat. As Wayne was putting in the last bolt, the filler had hardened to a point where it wouldn’t go in properly. Argh! After a lot of swearing, Wayne managed to get the seventh bolt through the skeg. Job done! And the result? Excellent! With our rudder turning smoothly, and no vertical movement, Wayne did a fantastic job. As I’ve said before, I’m glad I brought him with me!

While the rudder work was underway, our hard bimini began to take shape with a new team of workers fibreglassing and sanding. The bimini looks massive at ground level, but up on the boat it doesn’t look quite so huge.

The hardware is now being refitted to the deck and we’re waiting on a couple of double clutches from the US to be fitted.

Next week (week seven) we should see the final stages of the teak deck and the bimini/davit steelwork.

We’re also having the crazed acrylic of our three hatches renovated with new acrylic but I’m not sure when that work will start on those. 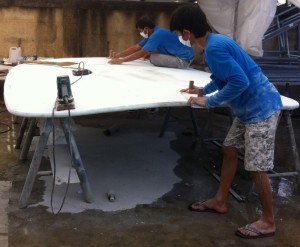 As we’ve been in Thailand for two months, it was also time to have our Visa extended so we took a trip into Phuket Town by songthaew.

The Phuket Port Immigration Centre is a couple of kilometres from town centre and takes around 20 minutes to walk. The office was busy with tourists but we had a lovely young lady assist us. We completed the necessary form, included a passport photo and paid 1900B each to receive a 30 day extension on our Visas. We stopped off for a quick bite at the pleasant Circle Cafe near the water fountain before catching a songthaew back to Boat Lagoon.

Also during the week Mr Peh dropped off our new grey cockpit cushions which look great.  I managed to sneak out during the week in between jobs and took a songthaew to get some groceries and also visit Rolly Tasker’s huge sail loft and chandlery. They’ve got a good selection of stuff, but nothing I really needed just yet. I did buy some courtesy flags and ordered some others they didn’t have in stock. We’ll need these for when we sail west as we’ll be visiting many countries along the way. The courtesy flags are a good size and made from ripstop nylon.

Sundays give us a chance to work on the boat by ourselves without workers sanding or working above. After a sleep in, today our task was to remove the holding tank and associated valves. Easier said than done! While I sat upside down in the head cupboard, Wayne tried to manoeuvre the holding tank into a position where we could extract it. After more swearing and sweating for a couple of hours trying to get the tank out of the small opening, the tank was finally removed. We’re replacing the ball valves and will scrub and clean out the whole system. This is the less-than-glamorous side of sailing…

It’s been a busy week and work is progressing well. We’ve passed the halfway mark and have 30 days before we need to leave Thailand to renew our visa, as we can’t extend it further. Fingers crossed much of the work will be finished by then. Bye for now.
– Ally

Downpours are infrequent now but the work continues.