A galley wench in Galle 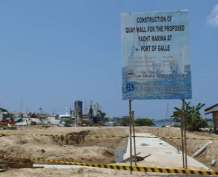 Apparently started in 2009, doesn’t look like this marina will be completed any time soon 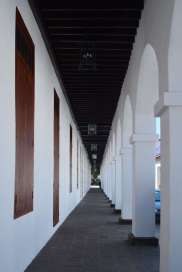 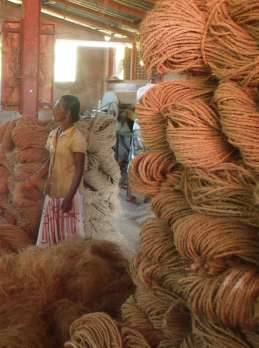 Rope made from coconuts 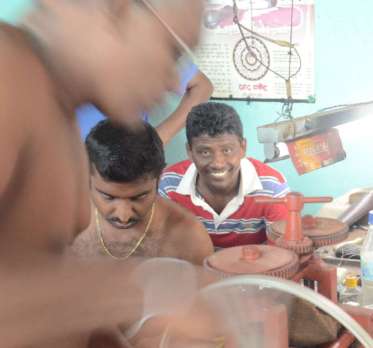 Ekka always manages to photo-bomb, no matter how bad the photo is! 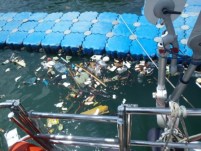 Outside the Customs station at Galle Harbour we were met by local tuk-tuk driver, entrepreneur and all-round nice guy Ekka. For a small fee he took us around Galle town so that we could get some cash from the HSBC ATM, get internet sim cards, and a loaf of white bread. Once we had internet we took the next day to relax and respond to emails and update blog. The next day Ekka dropped us off at the Galle fort, which is about 3kms from the harbour. We then spent a couple of hours walking around the 35 hectare fort boundary along the stone wall. This stone wall proved successful in saving the fort from the 2004 tsunami and it’s quite formidable.

The fort, built by the Dutch, has many lovely old buildings filled with touristy shops and cafés and is located next to the Galle International Cricket stadium. That evening we were invited to join Ekka at his home to meet his wife and three children. His very pretty wife made lovely curries from Jack Fruit, chicken and potato, a dish of Dahl, and a large steaming plate of rice. This was followed by small bowls of buffalo milk curd with honey drizzled on top, plus a caramel pudding with cashews. The honey is actually sap or treacle taken from the kithul tree and is very sweet. Also joining us for the evening were the crews of Kastehelme from Finland (Heikki and Maila) and Charlene from France (Bernard and Micheline). It was a very enjoyable evening.

While the six yachties ate, Ekka sat and spoke to us while his wife stayed away in the kitchen. Ekka talked about the tsunami that killed around 40,000 people in Sri Lanka. He shared with us that he has one brother now as most of his family died in the tsunami. He told us about the many bodies in the streets, the smell and that he had to put his two nephews in a box and bury the little boys.  There is still plenty of evidence of the disaster with disused buildings and rubble in various corners. On a positive note there are of course some new looking buildings.

A couple of days later, Ekka took us, while his partner Batu took Heikki and Maila for a day out. We drove east along the coast to a place where the local stick fishermen wait for cashed up tourists to give them cash in exchange for a photo of them fishing from wooden stick platforms. We visited a place where they make rope from coconut husks, a wood carvers workshop and souvenir outlet with some lovely artwork; a gemstone and jewellery workshop where we saw local men making jewellery with locally mined feldspar rock, Moonstone, plus other gems. The guy there put the hard word on myself and Maila to buy some jewellery but as yachties we don’t wear much jewellery and much of the items were too ostentatious for my taste.

Earlier we’d visited a herbal medicine farm, and had a fun time listening to a charming man tell us all about the health benefits of many herbs and spices such as cardamom, cinnamon, turmeric and sandalwood, to name but a few. He spread aloe vera juice all over my arms and face to demonstrate its use as a sunscreen, although I already had sunscreen on. Heikki acted as guinea pig for a herbal hair remover, which actually worked, taking a 5cm patch of hair from his leg. After our tour we were herded into a small area and given a head massage and back massage with various creams and potions. Unfortunately the guy doing me poured oil on my hair and rubbed it around and messed me up until my hair stuck up like coconut husk and then left me to it. We left there sticky, oily and hot and were then paraded into the gift shop. Our charming guide was keen to have us buy lots of herbal lotions and liquids. He suggested I buy some hair remover for my hairy arms. I told him I had grown quite attached to my hairy arms over the years and suggested he target Wayne’s very hairy face! He then suggested I buy some sandalwood cream to eliminate my wrinkles and make me look younger. His charm was starting to wear thin. I ended up buying some herbal lotion for a range of skin problems, not that I have any, but it’s a typical complaint when living in a sea environment.

For lunch we stopped at a local roadside place and had a feed of curry, Dahl, rice and warm soda water. The food is pretty much the same as Nepal, and like the Nepalese the locals enjoy this food every day. I don’t mind as I actually like it as well. The locals here eat with their right hands, shovelling the food in with small handfuls. Tourists are handed spoons and forks, but today I opted to eat with my hands (when in Rome…) after washing them of course. With bits of rice stuck all over my face, I know what a two year old feels like when it eats!

Later that day we took a casual stroll through the Hundungoda tea plantation and factory where virgin white tea is produced. Apparently an old Chinese method where virgins were chosen to snip the buds of tea with golden scissors and drop them into golden bowls and serve virgin tea to the Emperor. They still do this process, although I believe they’ve relaxed the prerequisites for virgins! I do love a good cuppa, and we tasted over 20 different varieties. Tea tasting! Who would have thought?

Back at the boat. From a concrete structure, let’s call it a jetty, is a huge leap onto the plastic pontoon and from there another leap onto the transom of Blue Heeler as the water surges. The pontoon let go one day so we had to wait for a surge to float us across before we dived onto the jetty. Boats bump and nudge each other, while mooring lines chafe and break under strain. It certainly isn’t ideal, but so far Blue Heeler is bopping around okay. We had a bad thunderstorm one day which blew the boat dangerously close to the concrete jetty. Lucky Wayne was aboard while I was out walking getting suitably drenched.

I had a load of washing done – LKR60 per item, which is a lot compared to Malaysia and Thailand where you can pay by the kilo or do it yourself at a laundrette. We have no facilities where Blue Heeler is moored but I can walk some distance for water to wash clothes myself. We’d actually prefer to anchor rather than bounce around chafing ropes and boats dangerously nudging each other when the swell picks up. There is a shower block 10 minutes walk away beyond the navy ships and ships transporting cement, but it’s filthy and only the shower head in the women’s block works, but the cold water blasts out making it worth the walk. Of the three shower stalls in the mens, there are no shower heads. There is no water close by to us, but the seawater is clear enough to make water, although there’s plenty of rubbish floating on top.

We now have 12 yachts at Galle and more coming in every day, and have run out of space on the floating docks. As each boat enters, the Immigration, Customs, Health Inspector, and Agents, all pile on the boats and leave with bulging pockets or briefcases. We gave beer and smokes, some gave good booze, others gave a can of coke or soft drink! Speaking of tips, gifts, or whatever you want to call them, the gift of a packet of smokes in Sri Lanka is most welcome. We don’t smoke but bought some in duty free Langkawi for around 50c per packet with the idea I’d handing over to fishermen and the like. Thinking they would also be cheap in Sri Lanka we were surprised that the locals were keen to get smokes from us, until we learned that a packet costs around US$5. That’s a huge sum to these people. Now I wish I’d brought more with me. Although it’s not the healthiest gift, it’s certainly the gift that gets attention, although a bottle of whiskey is probably a winning gift too. Gee, and I thought my Koala clips complete with Aussie flag would suffice!

We’ve been here one week, spending the time mostly worried about the boat, but the forecast has improved and we may take a train journey next week to make the most of our visit. Let’s see!

Sailing the world aboard Blue Heeler
View all posts by blueheelerhr39 →
This entry was posted in 2014, Sri Lanka and tagged Fort, Galle, Indian Ocean, Sri Lanka. Bookmark the permalink.

3 Responses to A galley wench in Galle