Galle is forgiven, but not forgotten 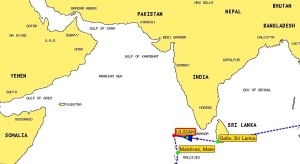 Satphone update: Thursday 20th March we departed Galle harbour. Although Blue Heeler disappointingly lacked lustre due to a sticky film of cement dust collected over two weeks, I was excited about the prospect of leaving for the blue waters of the Maldives some 440nm to the west.

I had enjoyed our foray into the hills of Sri Lanka and the train trip to Kandy, and generally seeing Sri Lanka, but the harbour stay on the southern breakwater, with the northeast wind blowing cement from the ships, dampened my overall experience. I’ve tried to keep my comments positive, but frankly, the cement dust will take many months to scrub clean and may cause further problems down the track. The agent says the marina will be ready in a couple of years so perhaps that will make the stay more enjoyable for others in the future.

Back at the floating pontoon, in a squall a couple of days ago, a boat dragged anchor, slamming and grinding into the next vessel, and almost landed on top of the floating pontoon in the maelstrom, except his rudder prevented this from happening. There were seven vessels moored at the time and only myself there watching, as Wayne had gone with a Ekka to have the gas bottle filled, and the others were off on trips, or in Galle town. I tried to contact the owner by email as I didn’t have his phone number. Wayne returned and dinghied to the distressed boat and added some extra fenders. He jumped aboard and found some rode and anchor and set about laying it to stop the boat hitting the neighbouring boat or damaging its rudder. We’d experienced a similar squall the week before so we had two anchors (Manson and SuperMax) set about 50m out, while our neighbour had three out in the foul bottom. Meanwhile I’d called the owner of the damaged vessel who quickly came back from Galle town. Anyway, only superficial damage but these incidents happen sometimes and it’s those situations that make it hard to leave the boat.

Local guy Ekka had arranged for his wife to make us some mango chutney and a jar of dried fish, baked chillies and other yummy spices, which is actually very nice. He also introduced us to Kithul treacle (sap from the kithul tree (not so sweet as golden syrup and a little like maple) so I bought a couple of bottles to have on curd or pancakes. Of course I also purchased some local tea, including a box of Dilmah of course and some Sri Lankan coffee too.

With our washing and provisioning done, we raised our Max anchor first as this was our secondary anchor. The 40m of rode was originally white, but now a foul shade of brown. Wayne used the dinghy to trip the anchor, and while he dragged it up, I hauled the rope aboard. Meanwhile a Navy guy and our agent came to clear us out. We’d already had the passports stamped by immigration and customs had given our port clearance, so this was just another futile formality with the intent to obtain another ‘compliment’ from us. They came aboard to look at our documents, while we stood there sweating and covered in muck from the bottom of the harbour. Keen to be rid of them, upon request for ‘a compliment’ I gave them each a packet of smokes and waved them goodbye. So keen in fact I generously gave the third guy on the jetty one too!

It was actually a nice day, but still very hot at this time of year. Motoring out a few miles from Galle harbour the depth was 40m and the water was clear and blue. We stopped the boat, Wayne jumped in just to check there was nothing wrapped around the prop and we hoisted our dinghy on deck. The weather forecast for the next few days was for light winds so we expect to motor mostly to the Maldives. It’s not ideal in a sailing boat, but the next wind wasn’t until the following week. By that stage Blue Heeler may well have turned into a monument at the harbour.

With light wind and a storm in the distance, I decided to start cleaning. Our polycarbonate windscreen was very bad and no amount of scrubbing would remove the cement dust. Wayne suggested citric acid, and although we had some powder leftover from the ‘chemical man’ in Penang, I instead grabbed a fresh lime and used half pieces to rub on the windows and plastic of the dodger. Voila! That simple trick made the windows, and me, a little brighter. With the clouds came some rain so out in my togs I started wiping away the dust while the rain washed it away. This stuff needs scrubbing off and no amount of rain will wash it away, but at least it’s a start.

Our destination is Uligan on the tiny, northern-most atoll of the Maldives across the Laccadive Sea. There’s plenty of ships out here. The AIS display shows “Armed Guard Aboard” for those that head towards the piracy High Risk Area. In the darkness of the first night, a boat zoomed towards us shining a light on us the whole way. This was a little unnerving, but once they got within quarter of a mile they turned and left. I doubt it was fishermen and suspect it was some sort of authority. Surprised he didn’t pull us up for a ‘compliment’!

From Uligan we’ll check in and spend a few weeks travelling south through one of the most beautiful and remote parts of the Indian Ocean. While writing this, dolphins play near the bow and I can see their shapes clearly in the 5am moonlight. All is good…

Sailing the world aboard Blue Heeler
View all posts by blueheelerhr39 →
This entry was posted in 2014, Sri Lanka and tagged Indian Ocean, Maldives, Sri Lanka. Bookmark the permalink.
%d bloggers like this: