Male, the capital of the Maldives, has one third of the total population, with around 110,000. Male appears modern and every square inch of the island, including the broader reclaimed areas are heavily built on. So different from the rest of the thousand or so islands in the Maldives.

At only 1nm long, it takes only a couple of hours to circumnavigate the Capital, Male.

The nearby island and town of Hulhumale is being reclaimed to house the overflow. In its current state it reminds me of an artists impression of a proposed town. Very new and empty, as it waits for the people.

After living on a boat for so long, Male felt a little claustrophobic, but in a nice way. 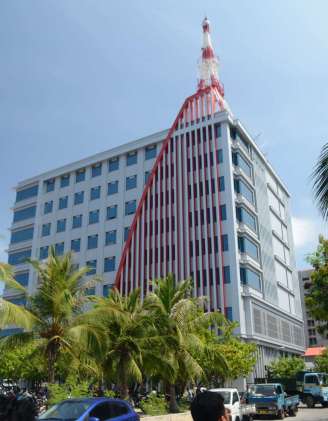 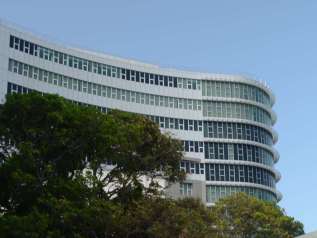 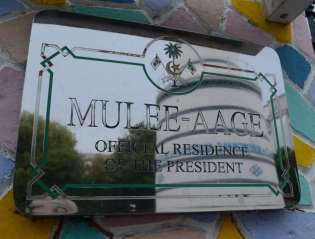 Architecture varies from the delicate look of the Presidents official residence, the white walls and gold dome of the mosque, to the distressed look of the rendered walls down many of the narrow streets, to the high-rise corporate buildings.

Tree lined streets are quite impressive offering the stroller a bit of shade away from the incessant heat. You can find a seat in Sultans Park, but there is much litter scattered around and no grass to sit on. The waterfront on the north east corner is bustling with ferries to take people to the various islands, including Hulhumale and the airport. 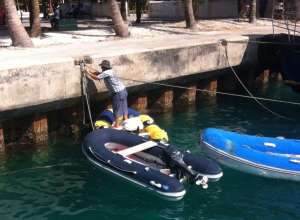 From the anchorage area, the dinghy is tied up against the wharf near to a small jetty. We were anchored at 04deg13.232N 073deg32.100E. The Express ferry costs around US$1.60 each way and takes around 10mins to Male.

On our return trip I inadvertently bought tickets to the airport, south of our anchorage. No worry, as Wayne spied a Burger King at the very modern airport and we decided to have lunch there. Burgers were around US$11 each and quite small, so you’d want to be really hungry for one (Wayne apparently was!) and don’t expect bacon on your Double Cheeseburger! 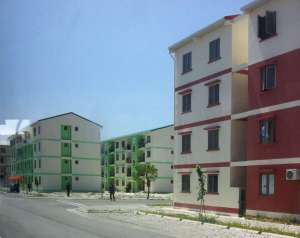 The ‘artists impression’ that is Hulhumale

From the airport we took the local bus which drove us to Hulhumale town where we stocked up on more veggies. This seemed to be the easiest option as we were only a short stroll from the dinghy, although the veggies were not as good as the remaining stuff I already had on board which was almost three weeks old. Nonetheless, we managed to by a few more spuds, onions, eggs, bread, frozen chicken, etc. In Male there’s the Fantasy store, which sells imported products from around the world. Alas I found no Easiyo. Here you could buy meats, although not a huge variety, plus a good variety of imported cheeses and tasty treats like stuffed peppers. 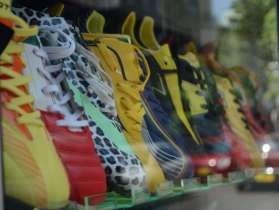 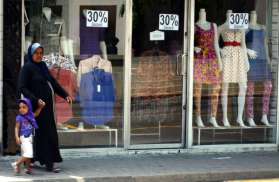 Male also has plenty of colourful shop displays and from what we can see and from what we’ve read, you can pretty much get anything here. What you can’t get you could probably import it, with a DHL outlet near to the jetty. We found a good chandlery however we actually didn’t need anything. That’s a first!

As far as clearing into Male versus entering from the north at Uligan, it seems from fellow yachties here at the anchorage that our experience was far easier and less stressful than others’ experiences. For example, one boat arrived on a Monday and his agent took a full week before they would issue a cruising permit. Another yacht arrived at the anchorage and had no luck raising his agent (Island Sailor) via VHF so he couldn’t clear in. Wayne assisted the captain by attempting to phone the agent, but even then couldn’t reach him. In the end the captain had to get another agent to clear him in the next day. Our agent was Real Sea Hawks and our Uligan clearance was excellent.

There’s a fuel barge at about a mile south of where we were anchored, although the price of fuel is unclear. We had to have a local guy board Blue Heeler and guide us to the barge. Once filled, he could not tell us exactly how much it would cost without first talking to our agent. Just about everything here is based on US$ and in the end they charged us US$1.20 per litre for diesel and a ridiculous $2.20 for unleaded. Good job we needed a small amount of that. We saw in town that the ULP was half that price at the bowser. If you’re coming from the north, don’t forget to fill up in Kulhudhuffushi.

It’s hot and we can’t swim here, so that’s about it for Male. A couple of days is all you need, and most tourists I expect would be at the resorts anyway when they come on holiday. We have two weeks left of our time in the Maldives and we continue our sail south in the morning.

No alcohol available in the Maldives. Can you imagine our thoughts when we saw this shop! Aussies understand, especially Victorians!

Sailing the world aboard Blue Heeler
View all posts by blueheelerhr39 →
This entry was posted in 2014, Maldives and tagged Indian Ocean, Maldives, Male, Provisioning. Bookmark the permalink.