Within the massive coral rings of the atolls you’ll find harbours, passages, bommies, ports and islands. The local Dhivehi names are falhu, kandu, giri, bandharu and fushi respectively. A falhu is a navigable lagoon surrounded by a coral bank. These can be man made or occur naturally. In most cases near a village, a passage is excavated through the coral bank and into the lagoon within giving access for boats. A kandu is a passage, while a bandharu is a port for the locals to moor the local boats – the dhonis. Fushi means island, while a giri is a dangerous shoal to be well avoided. 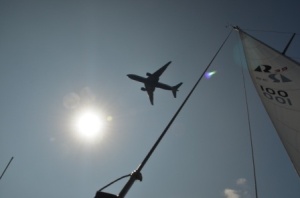 Definitely don’t want one of these to hit us.

Leaving the Hulhumale anchorage near the island of Male you’ll need to be aware of the planes overhead, some seemed a little close to the mast, but of course they were well above us. We headed to the South Male Atoll about 8nm south and entered the atoll on an eastern passage named Enboodhoo Kandu. Although there was a light westerly breeze, we opted to anchor some 20nm from Male off the small island of Kudafinolhu, with the island to the east and our bow into the wind. Quite exposed really. Usually not something we’d generally do but the grib files we’ve found to be reliable so far, plus the skies were clear.

The water at this anchorage was unusually warm, much warmer than the usual 28-29degC around the Maldives. With the depth at 27m, we used the Delta anchor with 5m chain and 70m three braid rope to make it easier on the windlass when hauling it up, as the rode is much lighter than 60m of chain. We motored to the Felidhe Atoll the next day entering through the Boamas Kandu and anchored near to the village on the island of Fulidhoo.

Weather over the following days continued sunny with light breezes, but still not enough to fully sail. With the last puff of wind finally gone, we motored east and anchored in a lovely spot at 03deg26.957N 073deg37.147E. Here we found a few good bommies for snorkeling and saw heaps of nice fish and a few reef sharks. I couldn’t find the name of this coral outcrop on the map, but you’ll see it clearly enough on iMaps.

Local dive boats are out in force and it seems the passages between the atolls and the depths of the Indian Ocean are the best places to dive. It’s a little difficult for the two of us to go diving in the passages. Although we’d like to dive the passages, the risk of getting swept away in a current needs to be considered, particularly during spring tides. We still have Internet out here, and generally we’ve had pretty good coverage with Internet provider Dhiraagu, but that tends to be stronger near the resorts, and we’ve noticed the strength has eased to ‘Edge’ the further south we go.

A further 30nm south in the Melaku Aroll passing through a very narrow kandu we anchored in the falhu off Maduvvaree on the eastern side. This particular falhu was easy to enter and we had no less than 4m depth. Also near the village is a bandharu, for the local dhonis and ferries to tie up. 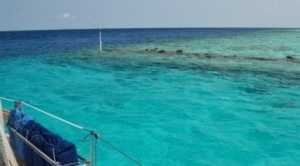 This small village, like others in the Maldives was devoid of obvious activity. There’s a peacefulness to these little villages and we’re happy to anchor nearby and not intrude on their islands unless invited.

Between swims, snorkelling, fixing things, and motoring along, I’ve taken a little time to preserve some aging veggies – jars of eggplant chutney, pickled beetroot, pickled green chilli and cabbage are slowly filling up my fridge. Perhaps I should write a recipe book ‘pickling my way through paradise’!

Our next anchorage was the falhu at the southern end of Melaku Atoll at 2deg.46.848N 073deg.24.702E at the island of Kolhuvaariyaafushi. There are plenty of dangerous giris in this atoll, appearing out of nowhere. A careful watch is vital here, although with the sun high we usually see the lighter blue indicating the shallows.

Our anchorage for the night had us enter a narrow passage to the falhu, with about 4m water on low tide. The water within the falhu is not as clear as outside, perhaps because the bottom is sandy and there’s more wave activity from the surrounding reef, but still worth a swim to cool down.

Another interesting discovery in terms of navigation to the falhu is that Google images may not be current, particularly as there are plenty of projects underway at many of the islands. Projects include reclaiming land, creating new falhus and bandharus, and other on land developments. For example, the island of Vilufushi, where we anchored next, as shown in iMaps doesn’t show a falhu. Whereas an updated image on the useful http://www.isles.egov.mv website shows much reclamation and a new falhu. The charts are way out and really no good for navigation at that level. 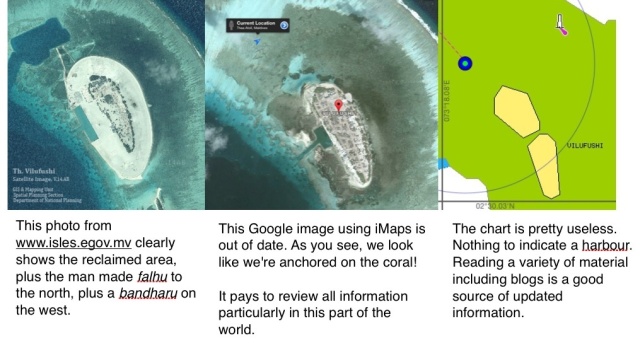 Much foreign aid has gone into helping many islands which were wiped out in the 2004 tsunami, and with so much work rebuilding the islands it appears that the money hasn’t gone to waste.

While at the falhu of Vilufushi, the local fishermen came up to Blue Heeler and offered us a huge coral trout, wanting nothing in exchange except a thankyou. This fish weighed about 4kgs and was about 60cm long. Wayne cleaned it then gave it to me to fillet and load in the fridge. Now we wonder if this one will have the dangerous ciguatera poison. Will let you know in a few days!

We’ll continue south over the coming days to reach Gan, where we’ll check out and keep heading south. Until then here’s a few more happy-snaps. Safe travels this Easter where-ever you may be. 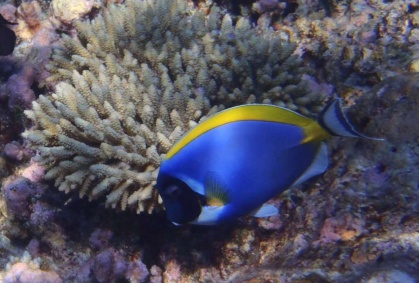 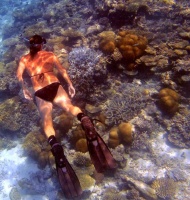 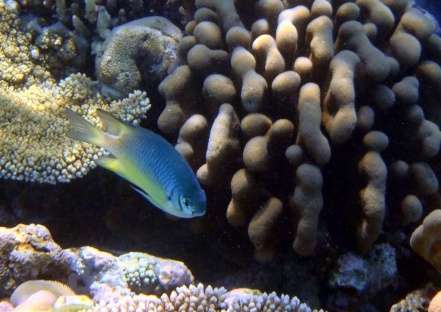 Narrow entrance to Maduvvaree falhu. Different shades of blue determine depth, but only in good light. 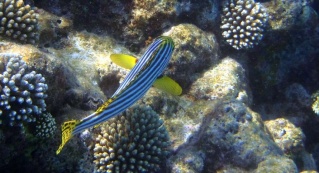 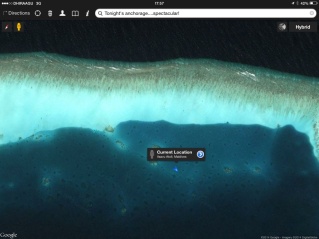 Sailing the world aboard Blue Heeler
View all posts by blueheelerhr39 →
Aside | This entry was posted in 2014, Maldives and tagged Indian Ocean, Maldives, swimming. Bookmark the permalink.