Gan with the wind

I know, ‘Gan with the wind’ is corny, but I thought it was better than ‘Here today, Gan tomorrow!’.

Our gift from the locals at Vilufushi

As you may recall, we were presented with a beautiful large coral trout from the locals at Vilufushi. Very timely given that we haven’t eaten fish for weeks and the fish dinner for Good Friday would now be much better than the canned sardines and pickled cabbage formerly on the menu.

Wayne was a little sus on whether this good-eating fish may have ciguatera. But after reading articles online, particularly those that suggest there’s been no known cases of ciguatera in the Maldives, we each had a lovely piece of fish with crispy skin for dinner and woke up feeling fine. On April 18, Good Friday, with no signs of ciguatera poisoning, we had a bigger feed of the succulent and crispy skinned baked fish with coconut cream potatoes. I even had a go at drying some strips of fish in the hot sun after salting them overnight. They dried okay but are very salty. Might be good with a beer or two.

Blue Heeler sailed in light winds from Vilufushi’s falhu and exited the atoll’s south east kandu, heading to the western entrance in the Hadhdunmathee atoll, a total of around 40nm for the day. Overnighting at the deep anchorage (25m) at Maavah, another group of generous local guys gave us an octopus in exchange for a look through Blue Heeler and through our binoculars (one guy had never seen through binoculars before). We thanked them for their generosity, then once they’d gone we asked each other “Now what do we do with it?”. If you’ve followed our blog over the past four years you’ll know that we are more chicken eaters than fishing folk.

Various internet articles explained how to clean and cook octopus, so Wayne set to with the messy task of cutting it up. I prepared a big pot of water to blanche the ‘pus after which he was cooked in my pressure cooker seasoned with sliced ginger, garlic and salt for 15mins.

After his extreme sauna I paper towelled his slimy skin off and voila! We have octopus ready for a good curry. He’ll stay in the fridge until we’ve eaten all the fish.

The atolls of Mulaku, Kolhumadulu, and Hadhdunmathee we passed through each day stopping for a swim and sleep. These southern atolls in the Maldives seem to have less suitable anchorages than those in the north. By suitable, I mean natural falhus on isolated islands, although there are inhabited islands with bandharus.

The distance from our anchorage at Maavah (1deg 53.609N 073deg 15.305E) to Gan is almost 170nm and sailing overnight, we passed the east side of the large Huvadhoo atoll located in the middle of the journey. We both agree it’s more pleasant sailing overnight than attempting to reach an unknown anchorage pushing to arrive within the best daylight, particularly with a good bright moon. Once out of the atoll we had an 11knot breeze from the west, increasing to 15knots later on. Lovely!

Gan causeway anchorage – we arrived with 0.4m tide and managed to cross with our 2m draft

Not since our trip to Sri Lanka have we been able to sail with good steady wind, and fortunately with a consistent WSW 15knot breeze we managed good speeds up to 7.5knots, 8 at times, although we slowed once we faced a 1.5knot current in the equatorial channel. In the sunrise dolphins surfed the waves and as usual I couldn’t help but take lots of photos of these remarkably playful mammals.

Overall we arrived at Gan at midday and 28 hours of sailing averaging 6knots. Perfect! As we arrived, friends aboard Ever After and KasteHelmi we’re departing, so we’ll see them in Chagos. John, from the yacht Mr John VI, was still anchored near the causeway and with his help checking the depth we managed to slowly enter the very shallow entrance a couple of hours after low tide.

The timing of this voyage also saw our second passover. No, not that Passover. That is, this leg of our voyage was also the second time we passed over the equator, at 4.30am on Easter Saturday. You may recall we’ve already progressed from slimy polliwogs to trusty shellbacks back in Indonesian waters a couple of years ago, so we weren’t required to perform any specific rituals. Wayne didn’t give an offering to King Neptune while on watch, so fearing the worst, when I popped up at 4.45am I threw a piece of coral trout and gave a courtesy nod to Neptune. Fair exchange for kind seas over the coming months? Sure!

With the expiry of our 30 day cruising permit, we plan to spend a few days anchored in Gan, where a cruising permit is not necessary, refuelling and provisioning and waiting for a good wind to sail south. 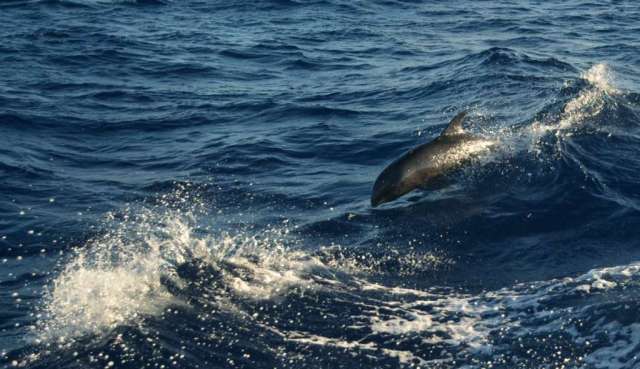 Sailing the world aboard Blue Heeler
View all posts by blueheelerhr39 →
This entry was posted in 2014, Maldives and tagged Gan, Indian Ocean, Maldives. Bookmark the permalink.

1 Response to Gan with the wind