With eleven yachts at Chagos upon our arrival in April, the first week was quite social, although the weather was pretty crappy at this time of year as the ITCZ shifts north. 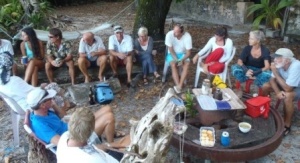 Most evenings we’d gather around the ruins on Boddam Island (aka the “Yacht Club”) and wait with anticipation of a tasty treat as one or two large grouper slowly baked on the open BBQ. Crew from Aussie yacht Sunflower (Toby and Julie) earned kudos for regularly catching enough fish to feed up to twenty hungry yachties.

Each boat would take a bowl of food to share; some still had fresh food and shared tomatoes and cucumbers, while others who’d been a resident some weeks presented tasty dishes made from chickpeas or lentils. It’s all very tasty and a great way to catch up. The dozens of protected coconut crabs that leech out of the coconut palm forest in the evenings are oblivious to the harm us humans could potentially inflict on them. As we eat our cooked fish, the large crabs surreptitiously infiltrate the bowls of salads and leftover fish, and crawl under our bare feet looking for scraps, along with the hundreds of busying hermit crabs. Fish and birds at Salomon also appear fearless of humans, probably as they’ve had the good fortune to have little interaction with our savage species.

After ten days sharing Chagos with the other yachts in wild and windy conditions, the weather fined up offering those keen to leave a fair sail towards Rodrigues, Madagascar or the Seychelles. A couple of boats even headed north to India. Except for a small yacht anchored a few miles east at Ile Fouquet, Blue Heeler was alone.

In the fine conditions of no wind, calm water and lots of sunshine, we enjoyed an existence few will ever experience. Snorkelling on the colourful bommies we watched as turtles picked their way through the weeds, while large cod stared with big lips from under the coral. We walked around Ile Boddam at low tide taking around two hours to dawdle over rocks and pick through the flotsam and jetsam on the western side, while crabs scurried towards their sand homes. There’s plenty of rubbish – unfortunately like other places worldwide the ubiquitous rubber thongs and plastic water bottles outnumber everything else. Boddam’s ruins include a church, graveyard and other unidentifiable buildings worth traipsing through the thick coconut palms to visit. For the benefit of the few of us fortunate to visit here, I hope the authorities decide to put up a map of the island’s ruins to retain and share the history of the former occupants. Five days alone at Chagos is certainly one of life’s magical experiences.

Taking advantage of the calm conditions, we did a little work on the rigging; tightening, cleaning, lubricating for the long journey ahead of us. Wayne tweaked the carby on the outboard, while I pickled some more veggies and scrubbed my stove to a former brilliance. To remind ourselves of the potential for tropical storms and rough conditions ahead we hoisted our storm jib and trysail and set them up making sure all the necessary shackles and sheets were in place for the long passage. We also deployed our new series drogue that we bought from the UK back in December and had delivered to Langkawi. It’s designed to be dragged aft to keep the stern into the waves to avoid broaching the boat in big seas. Let’s hope we don’t have to use it.

A large red BIOT vessel comes weekly, depending on the weather, to either check our permits or drop a bunch of researchers at the island. It was nice to have visitors!

There are plenty of reef sharks lurking below the hull monitoring our movements and large fish with a unicorn appearance waiting for food scraps. Now and again a creepy procession of black squid wiggle in from the depths. A turn of the head and they disappear.

Rousing us from our brief castaway-like existence and naked deck showers, vessels started to trickle in from Gan on the next weather window. We knew the crew and boats arriving as we’d met them either at Galle or in Thailand. It wasn’t long before the fishing recommenced. Wayne and Joey from Rhythm went fishing and landed a weighty tuna to share at an impromptu potluck. This began the next round of social gatherings.

Although some prefer to throw tuna back in preference for grouper, when baked in oil, soy and tomato sauce, wrapped in foil over the BBQ the tuna was deliciously juicy and tasty. Wayne and I went to the outer reef and caught a grouper, followed by tuna and cod a few days after that. On that trip we inadvertently hooked a small shark but fortunately Wayne freed him whilst retrieving our lure in the process. 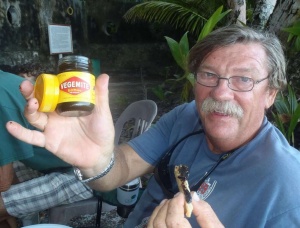 Dave’s a ‘Happy little Vegemite’ at his birthday party

With a good haul of fish, salads, and some chocolate cake made by Mary off the catamaran Leu Cat, we had a little birthday party for Dave at the ‘club’, complete with balloons!

With the end of May looming, the weather has changed for the better. Cooler winds and more fine days are replacing the storm clouds. After almost four weeks at Chagos the time to leave is upon us. With a forecast of easterly breezes we intend to sail to Rodrigues some 1100nm to the south west. With the south east trades strengthening we expect to have steady winds to reach our destination within 8-10 days.

Photo by Peggy from “Rhythm”

Sailing the world aboard Blue Heeler
View all posts by blueheelerhr39 →
This entry was posted in 2014, Chagos and tagged Chagos, fish, Indian Ocean. Bookmark the permalink.
%d bloggers like this: