Rodrigues Immigration, Customs, followed by Coast Guard came to Blue Heeler to clear us out after being notified of our impending departure the day before. Harbourmaster, Gilbert, waved us off on our three day passage to Port Louis, Mauritius. We left Thursday 26th June 2014.

After two crossings over 1000nm, the shorter distance of 400nm didn’t seem so daunting. The weather forecast was for 25knot southeaster with less than 4m seas; somewhat settled from the 6m plus seas earlier that week. On a broad reach (265deg) it would be no different really than the conditions up the New South Wales coast of Australia.

True to form, the grib files and forecast were spot on. Day one of our journey had lively seas but we managed a record 160nm for 24 hours, reaching 7/8 knots most times. Days two and three the seas settled to around 2.5m and the ideal winds from the south east at 15/20 knots. Problem though that we’d made very good time and arrived at the southern end of Mauritius by 9pm on Saturday. With only 40nm to go, we sailed slowly up the west coast of Mauritius overnight, finally heaving-to until daybreak when we could enter Port Louis.

Seas were good for us but earlier were over 6m

Overall the voyages from Chagos to Rodrigues, then onto Mauritius were not unpleasant. Even nine days bouncing around in 25knots on a close reach now seems like a distant memory. For others though the trip across the Indian Ocean proved disastrous.

The vessel Simanderal from the UK was abandoned between Seychelles and Madagascar due to rudder problems. Simanderal left Chagos in June on their way to Madagascar when catastrophe struck. Luckily all three aboard were safely rescued off the coast of Madagascar by a passing ship.

There are so many things that can go wrong with a boat and a dream can quickly turn into a nightmare. Other boats were unlucky to have major problems as they sailed into Port Louis. Generators, auto-pilots, sails ripped and other unwelcome and costly problems all have to be sorted before the big trip over to South Africa. Another vessel left Chagos for Mauritius only to have all their communications fail. By day four of their passage, their contact in the UK had quite rightly contacted officials who in turn contacted Mauritius Coast Guard. After ten days of up to 6m seas and up to 45 knot winds, the boat arrived safely in Port Louis. It certainly pays to have some sort of contact with others while out there.

Port Louis is easy to enter and the customs dock is easy to get to. The tie-up however is a little tricky due to a high cement wall with little to tie on to. Luckily Brian from Coruisk kindly helped us tie up so we could go through the check-in formalities. Unlike Rodrigues there are no fees for arriving on a weekend, but like Rodrigues the formalities were friendly and welcoming. 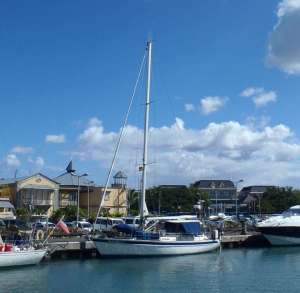 With the many forms stamped and signed, we motored the short distance to the Caudan waterfront ‘marina’ – not huge but we have access to water and power for only A$10 per night. It’s been over six months since we’ve had shore power and water so the following day we washed and scrubbed the salt and dust from Blue Heeler and cleaned inside top to bottom.

The Caudan waterfront complex is actually much more impressive than I expected. There’s plenty of fancy shops, great restaurants and a mix of locals and tourists. As we’re berthed next to a walkway, passers-by often pose in front of the yachts for a happy snap. Don’t be surprised if you see Blue Heeler in others photos from Mauritius! Coruisk is berthed ahead of us so it’s been great to have a few meals with Brian and solve the problems of the world over a beer or two.

Leaving the waterfront complex via an underpass you end up in the busy city of Port Louis. The road near the Central Market is filled with brightly coloured bags, T-shirts, other cheap stuff and lots of noisy people. Produce is fresh and plentiful but you have to talk your way through spice sellers otherwise they’ll try and hit you up to buy some local spices. Across the road is the meat market – here you can buy fresh chicken, beef, fish and other unidentifiable bits of dead animals.

Our visit in Mauritius will take us through to the end of August. Although I’m enjoying the luxury of hot showers, loads of electricity and easy access to walking around Port Louis, we won’t spend all the time at the Caudan waterfront and will eventually relocate to Grand Baie on the north of the island. As usual we’re waiting on a part to be delivered via DHL. Luckily only the gas strut in our vang.

Sailing the world aboard Blue Heeler
View all posts by blueheelerhr39 →
This entry was posted in 2014, Mauritius and tagged Caudan Marina, Indian Ocean, Mauritius, Port Louis. Bookmark the permalink.