Still at Caudan Waterfront, but I’m not complaining. We thought about moving around to Grand Baie a couple of times, but life is good here in Port Louis. There’s plenty to see and do and it’s a great central location to get around the island. The luxury of water and electricity is certainly a bonus too. I’d read on Noonsite there’s a maximum ten-day stay, but we’ve been here four weeks with absolutely no problem extending each week. 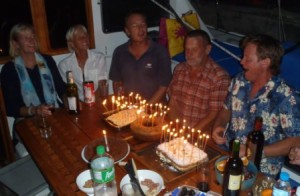 The friendly Caudan security staff know us well and drop by for a chat now and again. It’s a small area though and at one point it got a little cosy here with Canadian yacht Kantala rafted next to us plus two French yachts rafted up ahead of us, but it was all good. One night we joined birthday festivities aboard the French catamaran Huahine and had a good night with friendly crews from International yachts Elbe, Banik, Freyja, Pelagos, Kantala, and Uminoko. The preferred language that night was French so it was a nice chance to hear the nuances of the language. 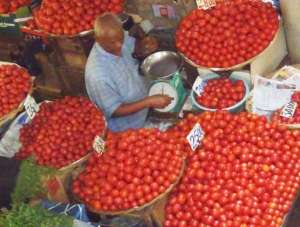 Each day tourists and locals stroll by the yachts standing in front of Blue Heeler for photos. Usually they don’t bother us, although a couple of times some cheeky tourists hopped aboard Blue Heeler to strike a pose. Wayne jumped up shaking his fist telling them to bugger off! The next day I made ‘no entry’ signs that hang from the rails stopping those bold enough to mess with Le Capitaine!

Some passers-by comment favourably on Blue Heeler and ask us all about life aboard. Of course we tell them the good stuff and leave out the bits about cleaning the head or squashing cockroaches. On one occasion we had a young lady asking whether she could borrow some matches. Seems it was boyfriend’s birthday and she’d arranged a small cake for him with candles but forgot the matches. Wayne gave her a box and told her to keep it, but she returned a short while later with the box plus a couple of pieces of cake for us! 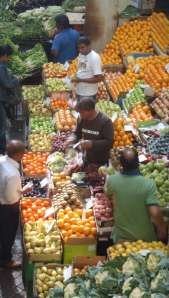 Most days I make my way through the throng of tourists and shops at the Caudan Waterfront and walk to the central marketplace to buy fresh meat and any veggies. On one side of the market entrance stands a man selling tubes of Supa-Glue. On the other side another sells Hugo Boss perfume for around a dollar (genuine of course). There doesn’t appear to be any rules about selling here. In fact if you stand long enough with something in your hand there’s a good chance you’ll end up selling it.

The market is filled with some of the freshest fruit and vegetables I’ve ever seen anywhere. The vendors are friendly, the stalls brilliantly stacked and displayed, and prices are clearly marked so there’s no need for exhaustive bartering. At one end of the market you can buy fresh baguettes, buns, pain de mie, rotis and all sorts of sweet treats.

I’m regularly targeted by local spice merchants. “Madame you want some saffron, vanilla, nutmeg, other spices? I have a shop nearby..”. A pleasant “Non merci” and a smile relieves me of their friendly persistence. Across the road from central market is a large meat market. I tend to buy chicken more than red meat and there’s a friendly guy I go to for poulet frais. I’ve progressed from pointing to requesting “Deux morceaux de poulet s’il vous plaît”. Unfortunately for me his a machine-gun response usually has me squinting blankly as the cogs in my head struggle to interpret what he said! 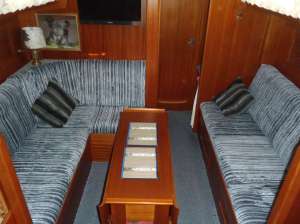 Textiles is a major industry in Mauritius employing thousands of people. Much of the fabric is exported to Europe’s top designers and the USA. Streets overflow with T-shirts, cheap clothes, belts and brightly coloured jeans. As a result of the recent World Cup, many of the T-shirts for sale are emblazoned with various country names, primarily Brazil. For lovers of sewing, Mauritius is the place to buy inexpensive and good quality fabric. Not one to make clothes nowadays, I managed to find some plush fabric to make protective covers for our saloon.

Walking south from Port Louis towards the end of the main Barracks is a shop called the Quay Store. Here I found cheap Sunbrella fabric – only MR400 per metre (about A$13). Absolute bargain! I popped back the following day and bought eight metres of Marine Blue Sunbrella to match the spray hood and other items made in Phuket. I made an awning that drops over our boom to hide our open saloon hatch and keep the rain out while we’re at anchor. Perfect! With a couple of extra metres I sewed one last jerry can cover and kept the rest of the fabric for later use.(Note: this fabric was Sunbrella Plus which has an additional urethane coating for even more moisture and abrasion resistance. I would recommend this for awnings as it’s stronger than classic Sunbrella)..

As usual Blue Heeler needed a couple of things repaired. When we set up the new awning on the boom, I noticed the main outhaul car that runs the length of the boom was broken. By sheer luck this hadn’t let go during our 400nm voyage from Rodrigues. If the outhaul should have let go while the main was reefed it would have been tricky to retrieve in strong winds as we couldn’t have dropped the sail. Luckily we had the piece expertly welded by local company Integrity Metalworks.

Another item we needed to replace was the gas cylinder in our boom vang. Unfortunately we didn’t know that to avoid the seals drying out in the gas tube the vang must not be laid down, as it was in Phuket. A new cylinder purchased from the USA was fitted in no time at all. Our boom is bouncy again…

It was time to get some diesel and refill our LPG bottles. There’s a local taxi driver at Caudan who likes to help yachties. I won’t mention his name but let’s just say that as usual, yachties are always the target of local scammers. When Wayne asked how much for a taxi ride he was quoted a reasonable MR600. When the guy appeared, suddenly the price was MR600 each way, plus extra for a trip to get the diesel. That did it! Wayne told him to bugger off back to his taxi (he’s getting good at that!).

The next morning we hired car through Monet Car Hire for three days. As it turned out getting the fuel and gas took a couple of hours so it was more convenient and cost-effective to hire a car. Gerard Monet is a likeable bloke and delivers the car to you free of charge. His rates are good too. 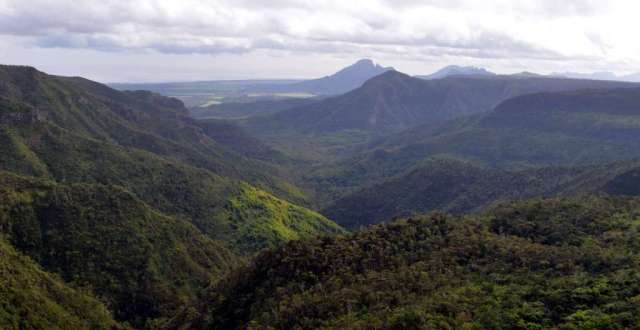 View from the top of the Black River Gorge National Park

In our tiny freedom machine we drove around the interior and to the south of Mauritius where the flowing fields of sugar-cane contrast against the rugged mountains. The Black River Gorges National Park was our first destination. We drove through the park stopping at Alexander Falls and Gorges Viewpoint for some impressive views. I couldn’t find any information about buses that go to the park, and from what I gather it’s difficult to get to and from the park without the use of a taxi. I think a hire car is best.

The roads are very good here and it takes no time to get around the island, dodging dogs and passing through small villages along the way. The next day we made our way south through the towns of Bambous, Flic en Flac, Grande Riviére Noire, and Petit Case Noyale, ending up at Chamarel’s Seven Coloured Earth. This geological phenomenon is a favourite for tourists, although for those without a car, the 2.5km walk into the park to view the small area of colourful sands may leave you feeling a little unimpressed. 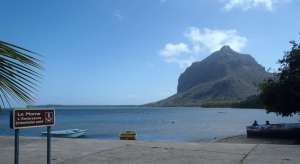 Driving along the windy roads behind trucks laden with sugar-cane and workers, we ended up at the impressive Le Morne, a 556m high basaltic ‘nut’ on the south-west coast. It’s all very touristy here and many resorts have exclusive access to the beaches. The trade winds were blowing the day we went so we watched the kite-surfers kick up their heels.

With one month left in Mauritius we remain in Port Louis for a couple more days as the wind is blowing over 30 knots. We’ll head up to Grand Baie for a couple of weeks once the weather improves.

Towards the end of our stay I’ll post a list of useful information on Mauritius for yachties. Until then…

Grand Baie – our next destination

Sailing the world aboard Blue Heeler
View all posts by blueheelerhr39 →
This entry was posted in 2014, Mauritius and tagged Indian Ocean, Mauritius, Monet Car Hire, Port Louis. Bookmark the permalink.