Well here we are in Richards Bay, finally! We arrived a couple of days ago and rather than spend my time typing to tell you all about the last day of our voyage, I’ve been indulging in steaming hot showers, getting an overdose of iron with delicious HUGE rare steaks with chips, and sleeping for over eight hours at a time, in a bed with clean sheets! We’ve also been catching up with many friends we’ve sailed with along the way since leaving Australia. But of course, to complete the journey, I share with you the final couple of days…

When the going gets tough, the tough eat Chupa Chups!!

You may recall from my last post, last Wednesday we got up early as we had 200nm to reach Richards Bay. We figured with the Algulhas current we would arrive at least by 5pm the following evening. With the wind behind us, the first half of the day was frustratingly slow; with a beam sea knocking us about and not enough wind to blow from behind. To add to the frustration, the local marine weather announcement said that an unexpected sou’wester was due to arrive by midday the following day – eek! Not only were we moving very slowly, we now had to reach Richards Bay in 24 hours with still too many miles to go!

With the wind sitting at 150degrees, the sails flapped, and the boat yawed, sometimes the boom would start to gibe as the wind was too far behind us, but the preventer would, er, prevent this from happening.. But we had to keep going south, not sou’east. By lunchtime though, the wind from the north had increased to 25, then 30, then somewhere around 35 knots we were flying through the waves, but we were still heading south with beam on seas. At some point we’d need to turn to 210 degrees and head towards Richards Bay.

As a rule we try not to upset the sea gods, wind gods, or any other gods that may misinterpret our fist shaking and cursing at the unfavourable conditions. With all the large waves around us, I had suggested that Wayne wear his wet weather gear but he was happy enough in shorts and T-shirt. At one point, a huge wave hit the hull, spurted towards the heavens, deflected from our bimini (which got a clean in the process), then about a billion litres of water was dumped directly on Wayne and flooded the cockpit! I wish I had a camera to catch the look on his face! To make matters worse, one of his clothes lockers appears to have a sprung a leak so a pile of his clothes were damp and smelt like a wet dog! He was not happy that day! 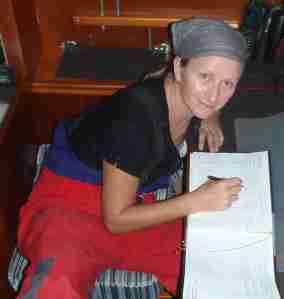 Anyway after that bit of entertainment that only life at sea can produce, the wind changed in our favour. A north-westerly allowed us to turn towards the sou’west so the big seas were now behind us. The current increased and at times we were hurtling along between 8-10 knots! At 5pm that day we still had 120nm to reach Richards Bay. Normally that would’ve taken us somewhere between 20-24 hours. Averaging 7 knots, we made it to Richards Bay by 10am the next morning! Lucky for us the gale force winds eased about three hours out of Richards Bay and sea state subsided. The current stayed with us; in fact it got stronger closer to Richards Bay. This allowed us to have a shower, eat some bacon and eggs, and tidy up down below, arriving at port somewhat refreshed, fed and smelling less like wet dogs!

While we’d sat out the weather at Inhaca, the crew of Coruisk managed to skirt the strong winds to arrive with a busted furler some 12 hours before us at Richards Bay. Kantala, who I’d mentioned in earlier posts, had arrived safely, although with no working engine and a mainsail missing some very important stitching.

But most boats need some love and attention after a gruelling voyage. Wondering why our wind-pilot, nicknamed ‘the Red Baron’, wasn’t working well on this final leg, we discovered upon arrival at Richards Bay that the 900mm rudder had sheared off about 100mm below the water!  Lucky for us Biggles (the auto-pilot) worked fairly well the final night, although we had to take regular turns at the helm because Biggles doesn’t like it too rough, beeps his distress and basically ‘spits the dummy’. At that point we have to grab the wheel to stop the boat turning back to Australia! It was a long night…

Upon arrival at Richards Bay, it was lovely to see the smiling faces of friends who had successfully sailed before us. A few had easy runs, while others took longer and are glad to be back on land. Some we hadn’t seen since Thailand late last year. The World ARC Rally has filled up the Zululand Yacht Club, so we have a small berth at the cosy, but a little rickety, Tuzi Gazi Marina. We had trouble squeezing our 12m vessel into a 6m berth, ultimately getting blown sideways and unable to enter, but with about 100 people helping by pushing off and cheering, Wayne managed to motor around to a slightly easier berth where we tied up. Welcome to South Africa!

The trip from Reunion, to the top of Madagascar then to Richards Bay certainly had us using all of our sailing skills. This last voyage saw all of our sails used – storm jib, tri-sail, baby spinnaker, etc. – and we faced winds from all directions and currents flowing against us and with us. The trip was demanding, but we didn’t see winds over 35 knots.

So that’s the trip to South Africa. I can’t say we’ve completed the Indian Ocean yet as some of the more challenging waters of this entire trip will be the next 1000nm from here around to Cape Town. But as far as ‘eating the elephant’, I think all we have left is one leg and perhaps the tail!

Sailing the world aboard Blue Heeler
View all posts by blueheelerhr39 →
This entry was posted in 2014, South Africa and tagged Algulhas, Indian Ocean, South Africa. Bookmark the permalink.