Wild things…I think I love ya!

Each time we arrive in a new country there’s a sequence of events that we follow – clear in with officials, get local cash, sort out internet connection, restock with fresh food and diesel, wash the boat, then look for chandleries where we source information about services or parts we need, or simply wait for a part to be flown in from overseas. Arriving in South Africa was no exception with our main priority to repair our Windpilot rudder. It took us a few days to sort these things out before we could relax a little and explore.

One of the must-do activities for anyone visiting Africa is to visit a game park to see the animals. I couldn’t wait to see the animals, particularly the cats! From Richards Bay there are plenty of game parks nearby so you don’t really need to travel to the famous Kruger National Park, unless you want to of course. 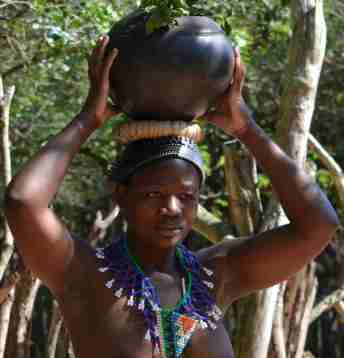 I wish I could walk with a pot on my head! 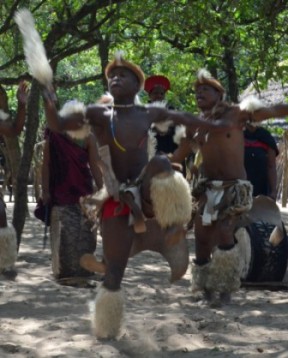 Good dancer and cleaner at the same time!

A few days of settling in at Richards Bay we tagged along with friends Tom and Salme (Ever After) and the crew of Kaste-Helme to enjoy a terrific full day out. Leaving early morning we first visited the Dumazulu Village for a glimpse of traditional Zulu culture including a lively dance show and a sip of locally brewed Zulu beer. We were greeted by an animated man who spoke only in Zulu and taught us a few local words (yes, YEBO; I’m fine thanks/thank you, SIYABONGA; Hello, SANIBONANI). We would use these words throughout the village experience. 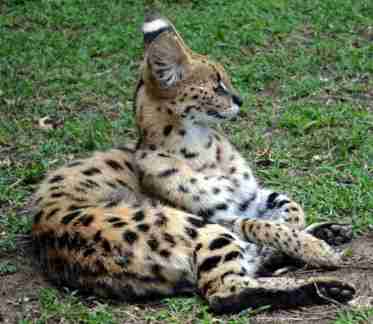 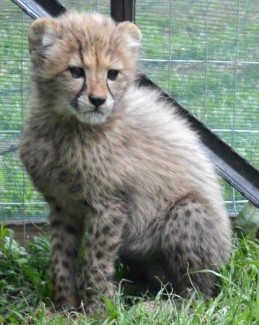 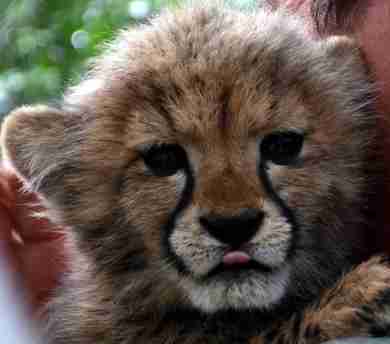 Ally with Cheetah – I just wanted to cuddle him! 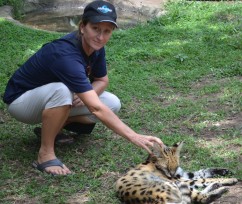 Next we visited the Emdoneni Cat Rehabilitation Project to get up close and personal with my favourites, the wild cats – cheetah, serval, caracal and African wild cats. In the afternoon we visited the Hluhluwe-Imfolozi park stopping for lunch and spent the rest of the day spotting zebra, giraffe, rhino, buffalo, elephant, antelope and a few pigs! As you can imagine we managed to fit in a full day of activities all within driving distance from Richards Bay.

The main town of Richards Bay and the main shopping mall, The Boardwalk, is 8kms from the waterfront marina. After a few days we hired a small car for a couple of weeks so we could run a few errands and visit the parks. While our rudder is in for repair, we drove to Durban and bought a large solar panel from local manufacturer ARTsolar. Wayne installed the panel on top of our davit and coupled with our two original smaller panels have quadrupled our solar power.

Already three weeks here our rudder repair still hasn’t commenced. Seems that things don’t happen too fast here at Richards Bay; reminds me a little like the remote Australian towns of Darwin or Cairns. While other yachts have fixed various bits and continued on their journey south to Simonstown or Cape Town, others like us are either waiting for parts or repairs and may end up staying here for Christmas. I could think of worse places mind you. 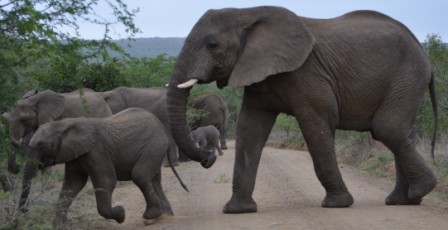 About 30-50 elephants crossed our path

With our new solar panel installed, provisioning done and fuelled up, and waiting only for the rudder repair, we took off for a few days to explore.

The Hluhluwe-Imfolozi game park is the oldest park in South Africa with over 96000 hectares for the animals to roam freely. Conveniently located within 90 minutes from Richards Bay, and with free multiple entry into parks within the KwaZulu-Natal (KZN) Rhino Pass (bought from the KZN Wildlife office in nearby Meerensee) made visiting the parks very affordable and easy. Splurging a little we stayed in a well-appointed Safari Tent at Mpila Resort fully equipped with kitchen, clean bathrooms and comfortable beds. What a surprise to see a hyena trek through our camp at dusk!

Three of the Big Five – Male Lion to the left of photo, Lioness, Rhinos and Elephants. Perfect!

The greatest wild animals – known as ‘The Big Five’ – are the Elephant, Buffalo, Leopard, Lion and Rhinoceros. We saw all but the leopard, but we also saw many wonderful creatures – large and small. At one point we managed to see rhino, elephant and lion all at the same time. Truly amazing! At one point about 30-50 elephants strolled out of the bush surrounding our small car, while at another location we interrupted a pack of wild dogs hunting antelope – excellent! 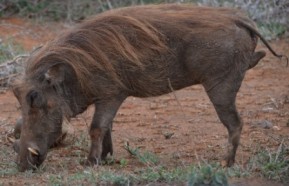 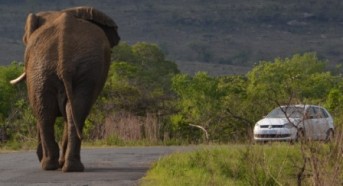 The crew of Kaste-Helme having to backup from Jumbo

You guessed it – Zebra crossing!

Almost ran over this pair 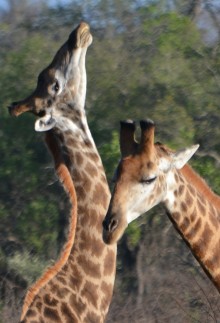 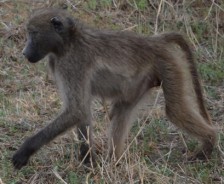 Stink eye from an elephant – a little unnerving! 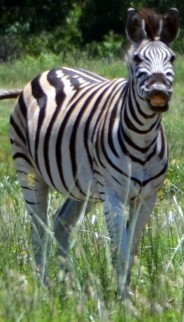 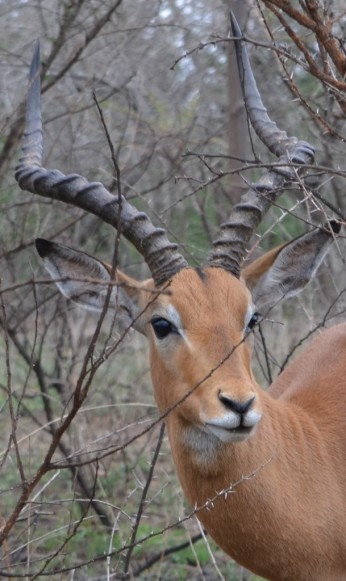 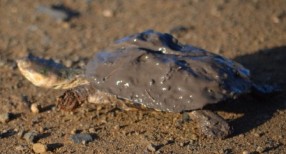 Even the littlest turtle 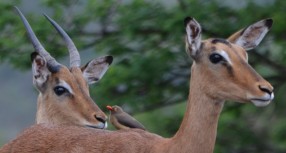 “Excluse me dear, I think you have something on your back” 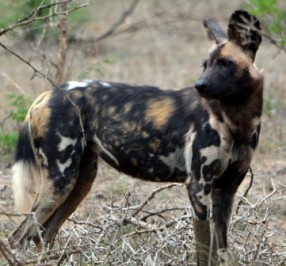 Wild dog looking for his dinner 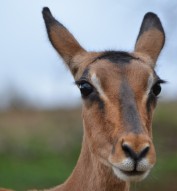 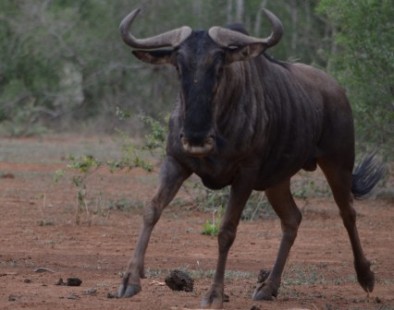 Wildebeast was in a playful mood 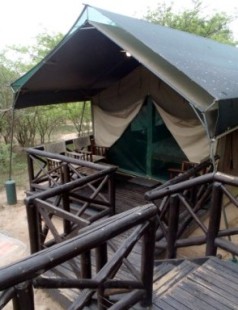 Our safari tent at Mpila resort 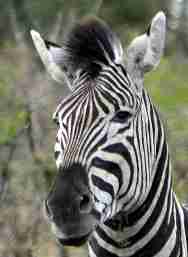 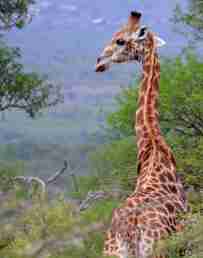 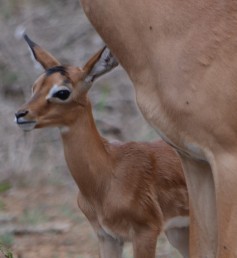 Further east of the Hluhluwe-Imfolozi park on the coast is the tourist town of St Lucia. The iSimangaliso Wetland Park runs north from St Lucia and is home to hippopotamus, leopard, giraffe, and many species of bird life. St Lucia is one hour drive north of Richards Bay and there is plenty of accommodation in town. Hippos are known to roam the streets at night and apparently they’re not particularly partial to humans. We were told that over 3000 people die each year in South Africa by hippos! We didn’t actually see any in the town but opted for a two hour boat cruise where we could get really close to the hippos. I couldn’t get the kids song “I want a Hippopotamus for Christmas” out of my head and hummed the tune all day. Lucky for us we were the only two on the boat so had a private cruise! 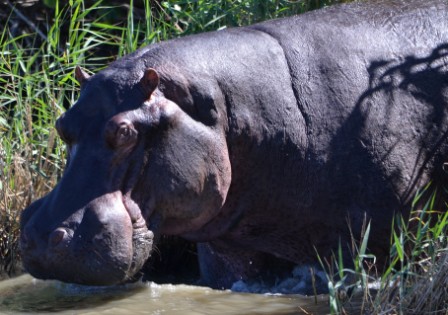 I got my Hippopotamus for Christmas! 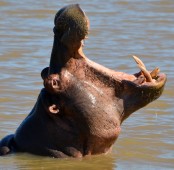 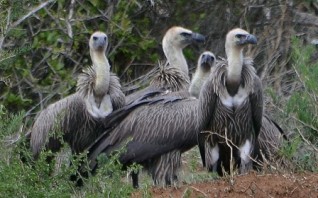 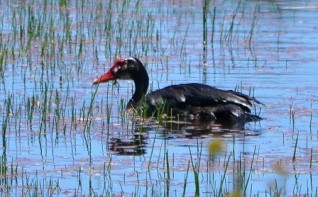 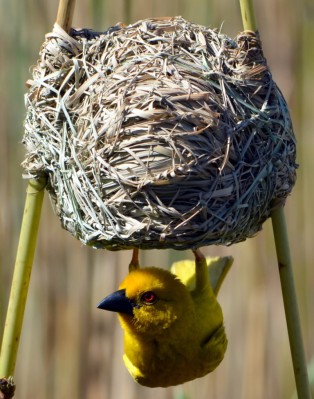 Delightful Yellow Weaver builds his home in the reeds 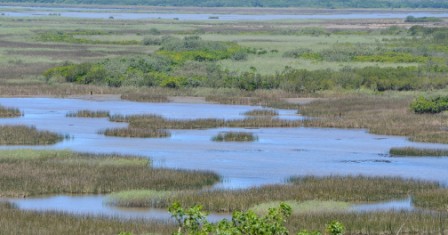 iSimangaliso wetland from the Aerial Boardwalk 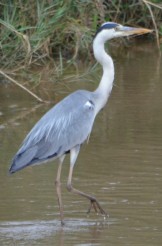 14 Responses to Wild things…I think I love ya!