Carrying an Esky on the head is most impressive. I’d be super impressed if it was filled with beer!

Through this extraordinary sailing lifestyle, we learn more about our global community than ever before. There is so much to explore, to read about, to digest. South Africa is no exception.

In South Africa, the 16th of December was a public holiday. The Day of Reconciliation – a date already significant to Afrikaner and African people from their own recognised past events – was adopted twenty years ago in 1994. This date recognises the end of apartheid and the unifying of a nation torn by racial injustice. This year, the 20th anniversary, was a rainy day so I sat inside and watched President Zuma’s address to the people on local TV. His message was, naturally, a call for continued ‘social cohesion, reconciliation and national unity’.

It’s quite obvious there is a huge gap here between the ‘haves’ and the ‘have-nots’. The ‘haves’ lock themselves in fancy homes behind electric fences and razor wire while the ‘have nots’ barely have running water and electricity supplied to their dwellings constructed from cement blocks. One year since the passing of Nelson Mandela, I wonder how many more years it will take for a little sunshine to brighten the lives of the underprivileged people within this Rainbow Nation. 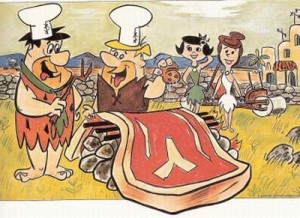 The slabs of steaks at braais are huge!

Besides visiting the game parks and a couple of trips to Durban, our experiences in South Africa are limited to the KwaZulu Natal province. Here, men are burly and women are buxom, and the local pastimes seem limited to fishing and the consumption of meat!

The responsibility of the men-folk at any social occasion is to heat up the charcoals and take control of the tongs at a ‘braai’ – Afrikaans for ‘barbeque’.

To get to the braai, the favoured mode of transport is the ‘bakkie’, a vehicle what we in Australia call a ‘ute’ or utility vehicle. There doesn’t appear to be any laws about sitting exposed in the back of a bakkie and the more people it can carry the better.

Aussies are well-known for barbeques, but the South African braai puts us to shame. Over the years in Australia we’ve evolved from eating ‘Fred Flintstone’ slabs of meat in favour of delicately spiced lamb kebabs, Thai chicken strips or marinated chicken wings. But here, South Africans cook sides of beef and miles of curly, fatty and spicy boerewors sausage. I’ve never seen so much meat consumed as I’ve seen at a South African braai! Quantities that would make a herd of cattle shiver.

But if you don’t feel like striking up the coals and cooking half a cow, you can opt for a cheap, spicy and filling dish called a Bunny Chow or ‘Bunny’. Now, when I heard this name I immediately thought of stewed rabbit, but no. The ‘bunny’, a dish from Durban, is basically a loaf of bread (quarter or half) filled with curry.

If sides of beef or bunnies aren’t enough to satisfy you and you start to wilt from hunger, to get you through to the next meal you can chew on the spicy cured meat or biltong. Basically looks like shrivelled leftovers from the braais!

Obviously a few vegetarian yachties at this braai with corn and haloumi simmering away.

Speaking of braais, the Zululand Yacht Club holds a braai every Friday where members and visiting guests can buy a slab of meat and a spoonful of token salad for only R60.00. On Monday nights, yachties are welcome to take their own food and cook for themselves. On these nights you’ll see embarrassingly small portions of meat, corn on the cob, breasts of chicken or even slices of haloumi cooking on the braai. Most yachties don’t eat as much meat as the locals.

Back at the Tuzi Gazi Waterfront, the place is abuzz with tourists and people eating meat and enjoying the views of the yachts. It’s also a place for groups of bikies to congregate on the main wharf and at the Mustang Bar. The Mustang Bar is reknown for its 1000gm steaks. Yes, that’s right – 1kg steaks!

Not to be confused with ‘bakkies’ or ‘bickies’, these leather-clad men, and women, with terrifyingly evil club names like ‘The Rebels’, ‘Undaunted’, or ‘Invictus Vector’ devour their bunnies and swill their brews before departing with the ear-splitting blast of motorbike engines as they tear off into the night.

As you can probably gather, we are still here in Richards Bay. Our windpilot rudder repair was finished just before Christmas and the weather hasn’t been the best for sailing south – really hot some days, cold and raining the next. To reach East London is 350nm and will need at least three days of favourable weather – ideally four days – which we haven’t seen yet. But there is a weather window we will take this week and will probably be at sea as it clocks over the new year. If conditions change we may have to pull in at Durban, some 90nm south of Richards Bay.  The weather along the coast here is changeable to say the least.

As far as Christmas this year, it was sweltering – around 40degC – but we didn’t spend it sweating alone. Local Afrikaan, Joop, kindly invited a bunch of homeless yachties from Tuzi Gazi Marina and Zululand Marina to join him and his family for Christmas.

A Potjiekos is prepared for us by Joop

He and his wife and three children completed a circumnavigation last year and were pleased to have sailors from around the world at their home to share stories. To feed over 25 people, lunch was prepared in a huge pot on an open fire while the yachties provided cakes, snacks and other tasty treats. Called a ‘Potjiekos’ the dish consisted of oxtails, potatoes, carrots, onions, rice and spices and was quite different to the normal Christmas fare. Everyone had a good time and thanked him for his hospitality. Although I think we all left puddles of sweat on his tiled floor!

So as the year comes to an end, and before I wear out the B on my keyboard, I reflect on our travels in 2014 and the experiences we’ve had.

From Thailand to Sri Lanka, Maldives, Chagos, Rodrigues, Mauritius, Reunion, Madagascar and South Africa, this year we’ve travelled thousands of sea miles experiencing many different cultures and learning more about the inglorious histories. Many of these countries are extremely poor, either through war, natural disaster or just plain bad management, but it’s amazing how resilient and friendly people are despite the conditions they live in and the nastiness that often appears in the news.

To all my readers, particularly those who’ve lost a loved one this year, we wish you and your families peace, health and happiness in 2015. Thank you for coming along on our journey this year

And finally, for those considering a New Year’s Resolution, or for those planning on crossing the Indian Ocean in 2015, a fitting quote from Nelson Mandela:

See you next year – Ally & Wayne

Sailing the world aboard Blue Heeler
View all posts by blueheelerhr39 →
Aside | This entry was posted in 2014, South Africa and tagged Braai, Indian Ocean, KwaZulu Natal, Richards Bay, South Africa. Bookmark the permalink.