Blimey! Yew geezas came all tha’ way in a boat? It is a bi’ ruff aaht there innit? Know what I mean? Why don’t yew ‘ave a beer?  Awright nuff said, yeah? Sorted mate, cheers! – A bit of fun from the ‘other‘ East London.

A forecast northerly wind signalled our only chance to escape the clutches of the Tuzi Gazi Marina at Richards Bay. With repairs, provisioning and enjoying Christmas, after six weeks it was time to go.

The distance from Richards Bay to East London is 335nm. This leg is considered the most challenging leg when rounding South Africa. We expected a positive current and planned a voyage of no longer than 60 hours, plenty of time before the next southerly blow. The east coast of South Africa is notorious for southerly winds appearing in a matter of minutes, literally. A strong south flowing current against an opposing southerly wind can cause freak waves up to 20m. Yes, 20m! But that is the worst case scenario and there’s no way I’d be out in anything that produces waves that big! 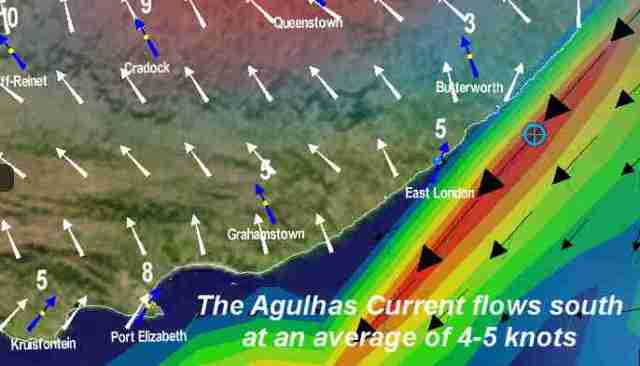 We had a three day window before the next southerly was due and we were hopeful it wouldn’t come earlier, trusting to some degree the information on our gribs, which appear to be quite accurate for this region. While we’ve struggled to hear the local Peri Peri weather updates down the coast we’ve picked up the local VHF weather reports three times each day.

On 30th December we farewelled remaining yachts at Tuzi Gazi and began our trip south.

The weather was enjoyable for sailing and as we approached the coast off Durban we updated our weather information in case we needed to change our plans and head for Durban. This was our last opportunity to do so with a further 250nm to East London. As it turned out, the forecast hadn’t changed and we continued south.

It was some time before we caught the south flowing current, adjacent to the Aliwal Shoal about 25nm south of Durban. The current increased rapidly and in a short while we were sailing along between 10-12 knots with 2-3m seas. Our ETA was brought forward to 0100am but we didn’t want to arrive that early in the dark. The 4-5knot current was strong so much so that we had to reef to slow us down. The final 24 hours of our trip we travelled approximately 200nm with a small amount of sail. A record! The entire 335nm trip took 48 hours much to our delight! The final night was New Year’s Eve and just before midnight I woke Wayne so we could both see the new year in, then promptly went below for a sleep while he resumed his watch. 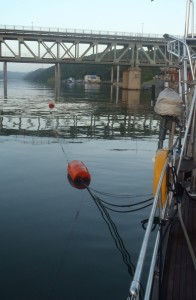 The first day of 2015 we hooked a spare fore’n’aft mooring in the Buffalo River. East London is the only river port in South Africa and very easy to get in to. After a well earned sleep we went to the Buffalo River Yacht Club for a shower and a drink and introduce ourselves. On Fridays the club has a braai so the next night we and a few other international yachties, joined in, filling our plates with huge steaks, chips and salad for R60.

The town and shops are not far away although we were warned that nasty people may jump out of the bushes and stab us for a few measly Rand. Needing some fresh veggies, we went out one day and decided to travel to the Hemingsway Mall, some 9kms away. The taxi driver was very friendly and took us through East London passing street names of “Oxford”, “Fleet”, “Drury Lane” and “Parklaan”.  Dotted amongst the ordinary looking shops and low level buildings, there are some beautifully designed old buildings and stunning churches in East London.

For the short time we were there, we enjoyed a few drinks with a couple of locals plus crews from other passing yachts. Mooring in the river is R50 per day and R10 to use the showers, and there is little anchorage room due to the large car transport ships that frequently load/unload at the vehicle terminal. East London has a DaimlerChrysler manufacturing plant where they also manufacture and export the C-class Mercedes Benz. Things you learn along the way… 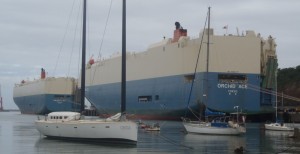 After only a few days, a north-easterly wind had us back on the water on our way south to Port Elizabeth some 130nm away. The weather is cooler in the wee hours of the morning so we were rugged up on night watch. This run wasn’t as swift as the current eased south of East London, but with 25+kn winds from behind we were still travelling fast enough to reach there in the dark. Once again we furled the main and foresail and entered port at a respectable 6.30am although we were mindful of the approaching south-wester. On cue, by 9am the wind was up to 25knots from the south-west!

View of the yachts from the Algoa Bay Yacht Club. Ore loading facility to the right of the photo.

Port Elizabeth or “PE” is a massive port which also supports the motor vehicle industry. The Algoa Bay Yacht Club is on the southwest corner, unfortunately near the ore loading terminal. Yachts berthed for any length of time are a shade of grey due to the dust. We don’t plan to stay long enough to get covered in grime.

The Algoa Bay Yacht Club staff is friendly and a berth will set you back a very affordable R50 per night plus R30 pp per day for facilities. The club’s bar and cafe are upstairs; a Superspar supermarket, cafes, restaurants, and a few other shops are a 20 minute walk out of the port. A well stocked chandler is close by too.

With just over a month until our visa expires, we are keen to move along the southern route. We’re still not ‘officially’ out of the Indian Ocean yet – we cross into the Atlantic once we round Cape Agulhas, a few hundred miles yet. Not sure when this will be as we may stop at Knysna on our way to Simonstown in False Bay. Tomorrow we leave on the next easterly breeze. 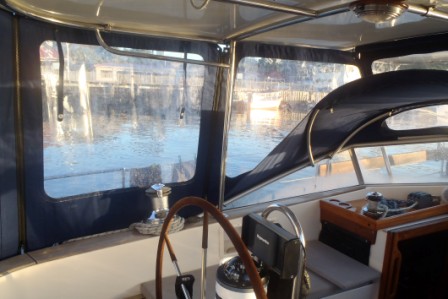 In Thailand we had plastic windows made for our new cockpit – the perfect ‘sun room’ for those cold mornings!

Sailing the world aboard Blue Heeler
View all posts by blueheelerhr39 →
This entry was posted in 2014, South Africa. Bookmark the permalink.
Loading Comments...
%d bloggers like this: