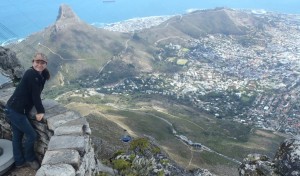 The sail south from Simon’s Town, around the Cape of Good Hope then north to the Royal Cape Yacht Club (RCYC) in Cape Town was around 55nm. Magnificent coastline views of Table Mountain and the cape (see banner above). With little wind we motored all the way enjoying displays of frivolity of lazy seals and dolphins while sea birds dive into the icy water to catch a feed of fish.

The city of Cape Town, over 350 years old, is a remarkably modern and vibrant city. Easy to get around with the MyCiti bus system, excellent views of Table Mountain no matter where you are, beautifully restored architecture mixed with modern designs, plus wonderful eateries, shops and markets to explore make this an attractive city to visit.

Besides our achievement in crossing into the Atlantic, this year I reached another milestone – middle-age! As a fitting end to our visit to South Africa, and a sad farewell to my youth, sailor friends from around the globe joined us for a casual dinner at the RCYC. Also in our last week in South Africa we spent the time getting ready for our trip north to Namibia and across the Atlantic – provisioning, cleaning, oil changes, etc., plus cramming in as much sight-seeing as possible.

Walking a short distance to the Woodstock bus terminal, we caught the T01 bus into town then another bus to the base of Table Mountain. A further bus then takes you up to the cable car station, but for us we were lucky to get a lift from a local guy who was invited us along. I’ve wanted to visit Table Mountain for many years and although a little cloudy the day we went, the skies cleared and the views were stunning.

Worth a visit is the impressively designed Castle of Good Hope built in the 1600s by the Dutch East India Company. You can easily spend a few hours poking around the grounds, the torture chamber or visit the military museum. Originally next to the seaside, the land was reclaimed and the castle now sits a few kilometres inland.

The District 6 Museum grabs your attention as you learn about the Forced Removals of ‘non-white’ people during the 1960s and 1970s. As a result of the cruel Group Areas Act of 1950, designed to segregate whites, blacks, and coloureds, many were relocated by force to the Cape Flats area south of Cape Town. This small museum displays many sad and revealing tales and photos of those times before and after the removal. 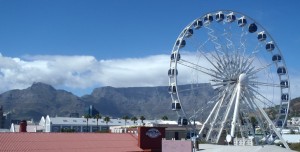 The V&A Waterfront is a large waterfront shopping complex and marina located west of the main port. Old historic port buildings impeccably renovated now sell artifacts or wheat-grass drinks where in the past they may have stored grain or produce. The newer shopping complex has all the fancy brand shops for those who want to indulge in a bit of retail therapy (or perhaps by someone you love a new iPod for their 50th birthday!). The T01 bus from Woodstock travels directly to the Waterfront station in less than 20 minutes. This makes it easy to get do provisioning from the Pick & Pay in the basement then catch a taxi back to the RCYC.

Another ‘must-see’ is the small neighbourhood of Bo Kaap at the base of Signal Mountain.This old area is known for its Cape Malay Muslim community and for the brightly coloured homes lining the cobbled streets.

A visit to Cape Town wouldn’t be complete without a trip to infamous Robben Island. Originally a leper colony but more famously for holding political prisoners during the struggle against apartheid. A ferry ride takes 45mins to reach the island, but you’d better book in advance as it’s a popular for tourists.

Former inmate guides us around the prison

Buses take punters on a guided tour of Robben Island before dropping us off at the prison. A former inmate, who was locked up here at the age of 19, is today a guide at the prison. He shared some anecdotes of how the prisoners were treated in prison. For example blacks were fed less than coloureds and the only whites were the guards as white prisoners were sent to Pretoria. He also made it very clear that the struggle against apartheid was not always whites versus blacks, as people fought for what they believed in, no matter what colour they were. 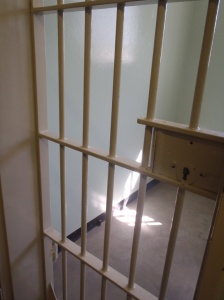 The cells are tiny, including Mandela’s, where he spent 18 years of his 27 year incarceration. As an encore to the visit, while we waited for the outgoing ferry, a small group on the incoming ferry sang enthusiastically at the top of their voices, singing praise for Mandela. Hearing the passionate, rich African voices particularly here at Robben Island gave me goosebumps. This was one of those “you had to be there” moments. South Africa is one of the most interesting countries to visit on this route. The wounds of the struggle against apartheid may heal in time, but an angry scar is still very raw. One can only hope the magnanimity of the people and legacy of Mandela lives on.

Back at the marina, it was time to leave. So many yachts here with little maneuvering room in strong winds. Even as we left with only 15knots of breeze, Wayne struggled to bring the bow around enough to clear the bows and sterns poking out into the narrow gap. Luckily Etienne from La Luna was there to lend a hand. I threw him a line and the two of us pulled the bow around so Wayne could motor out.

So that’s it! The whole of 2014 was focused on crossing the Indian Ocean. Doesn’t seem so bad now that we’ve done it! We were lucky though as some boats suffered disasters and at least one boat we know of was abandoned. We’ve sailed over 7,000nm since leaving the Surin Islands in Thailand and surprisingly only 50 overnight sails. I thought we would have done more overnighters. We know a few boats crossing the Indian Ocean in 2015 and wish them the best of luck for the crossing.

A new adventure is upon us. Our goal is to reach New York by May. We’ll have a couple more opportunities to sail the Caribbean, but our aim is to enter the Hudson River and do the Great Loop this year. We have almost 5,500nm to reach Trinidad & Tobago, and over 7,500nm to reach New York. Once again the trip is broken down into manageable legs. I didn’t have time to finish this post in Cape Town so I’m sitting in Luderitz, Namibia completing it. You’ll have to wait for the next post to read about our trip up here and our fleeting visit to Namibia