Lüderitz is a small township of Namibia located at the edge of the dry Namib desert and cold Atlantic Ocean. Blue Heeler sailed well up the coast from Cape Town – in fact it was one of the more pleasant sails we’d had for some time. Winds from the south-west were up between 25/30 knots, but the seas weren’t too big. Day three though we had no wind – unusually our original grib didn’t show this, but there we were. Thinking we could arrive in light on the Saturday night we motored for some hours until the wind returned. But it wasn’t enough. Our ETA was now looking to be in the middle of the night, no moon and with 30 knots of wind. On the fourth day in 15knot wind we decided to hove-to rather than enter a new country and an unknown harbour at night.

Floating around the ocean for around eight hours we deliberately made no headway. After our brief pull-over, we set the sails and continued on our journey to arrive at daylight in more favourable conditions. Fellow yachties did arrive into harbour on the Saturday night but got hammered by 45knot winds. Glad we stayed out! As we arrived on a Sunday, the Port Control officer said we could stay on the boat until Monday to check in, as Immigration and Customs were both closed. If we did want to check in we could arrange it but would have to pay overtime of around N$80 per person (about A$10). We decided to rest instead and would clear in on Monday. 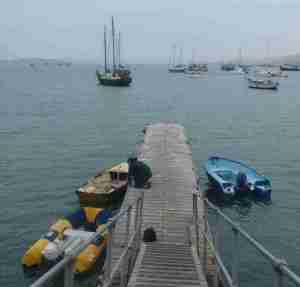 Dinghy dock at Luderitz – on a calm day.

Heavy fog extends the coast on calm days and brings with it some surprisingly chilly mornings. It can also get a little windy here too. There are some moorings available, but we decided to use our anchor as we have more faith in that than unknown moorings. Unfortunately another yacht came in after us and anchored in front of us in winds over 30 knots. We’d seen this particular 52′ boat at Cape Town and Wayne had actually made a point of commenting on the inadequate size of his anchor for such a large and heavy vessel.

After waiting two hours in the cockpit to ensure all was okay with this guy’s anchoring, Wayne decided to go below for a shower while I busied myself in the saloon. Next, a loud crash and Blue Heeler shuddered. I was on deck in a second to see the other boat had dragged anchor and smashed into Blue Heeler. I called out to Wayne who had quickly dressed and came up to see what was going on.

Eventually their bow roller bent the clamp bolts on our outboard. Only at this point did the owner grab the wheel and show any signs of controlling his vessel. Great! We had a feeling that would happen. Although gestures of recompense were shouted across to us in good faith, Wayne was furious and gave him some strong advice on where he should put his anchor! We are always amazed by people who have such inadequate ground tackle for boats worth hundreds of thousands of dollars and then plonk themselves close to other vessels!

ayne spent some time trying to straighten the outboard clamps so we could actually get it off the boat and go ashore to clear in. Immigration had no problem with stamping our passports and the officer was very friendly. Customs on the other hand gave us the third degree as to why we hadn’t checked into the country in a timely manner. We did say that we were still within the 24 hour period and had had trouble getting off the boat, but he was convinced we’d arrived on Saturday night with two other vessels and we should be punished.

After explaining our case (and dobbing in the Port Control officer) he relaxed and decided not to fine us but gave us a stern warning about entering another’s country and our responsibility to observe the law. We smiled, agreed, apologised for our naughty behaviour and all was well. (A little different from South Africa where we waited six days then actually had to go to Customs to clear in!). The other two vessels that arrived on Saturday were raked over the coals by this guy too and ended up paying a fine, but it was only N$100 per boat (US$10). 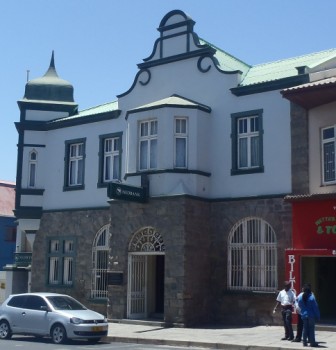 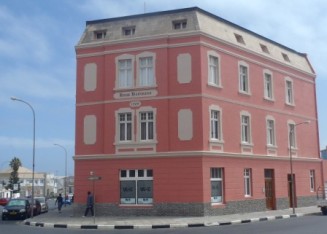 Once ashore and tied up to the handy dinghy dock, we could have a look at this vegetation-free and dusty town. Lüderitz is best known for its colonial architecture and there are plenty of beautifully restored buildings on display in this tidy little town.

Lüderitz is also known for diamonds. In the late 1800s, Germany founded the town (Namibia was known as South West Africa at the time) and all but decimated the locals in doing so. Over the subsequent 30 years before they were justifiably kicked out, the township of Lüderitz and the outlying ghost town of Kolmanskop was erected. Although Germany muscled their way into Africa for a relatively short period, the buildings, language and road signs reveal the extent of German influence.

Takes a tough plant to thrive in this environment.

Old wringer – I could use one on the boat! 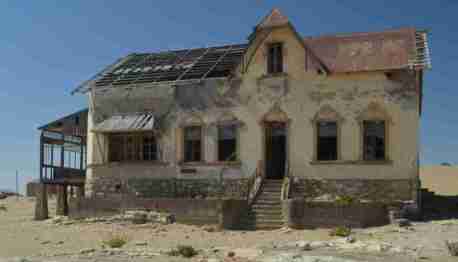 The design of these old buildings would fit into any city.

Our stay in Lüderitz would be only four days. That’s a shame because the people are extremely friendly and a few more days exploring would have been a bit more relaxing. After some last minute provisioning, paying the Lüderitz Waterfront N$15 per day to use the dinghy dock, we visited Port Control, Immigration then Customs to check out of Namibia.

Tomorrow morning the weather is right and we depart with four other boats in the morning. There will be strong winds and big seas for the first 500nm then everything should settle down and we can enjoy the smooth Atlantic sailing that everyone’s been telling us about. Of course we won’t have internet for the next couple of months, but I will update the blog from time to time from our Satphone. See you on the other side!

Kids playing at the park at the waterfront.

Sailing the world aboard Blue Heeler
View all posts by blueheelerhr39 →
This entry was posted in 2015, Namibia, South Atlantic and tagged Atlantic, Luderitz, Namibia. Bookmark the permalink.