“Land ho!” I yelled as I sighted the tiny South Atlantic island shrouded in early morning mist. The sun popped up from the east exposing the island of St Helena some 10nm

away. A couple of hours until we arrived gave me a chance to do some washing and tidy up. The woman’s voice of St Helena Radio is clear and pleasant and within a couple of miles of the island, a further call to Port Control for another friendly reception to the island. After nine nights at sea our arrival was at a respectable 9am and only a mile or so behind our friends aboard catamaran Rhythm.

Fortunately for us other friends already on moorings came across by dinghy to assist us with our lines, as they can be a little tricky to tie up to. Port Control was keen to have both crews checked in quickly, as it was a Saturday as they don’t usually work on weekends. By 10.00am we were already on the ‘ferry’ taking us to shore where we’d check in. The process of checking in is straightforward and both Customs and Immigration came in especially on the weekend for us. (Harbour fees for GBP40 per boat and GBP17 per person immigration fees after three days’ stay. There’s also a GBP2 fee per day for mooring, but the first day is free).

By 10.30am we’d checked in and with wobbly legs after so long at sea, we sauntered up the main street of Jamestown for our first glimpse of this remote village. We’d leave the sight-seeing to later, so the first couple of hour’s we spent catching up with friends from Infini, La Luna, Coruisk and Rhythm and had an easy lunch at the popular venue, Annie’s Place.

With only a few days at St Helena before continuing on our journey, it was first things first. Sunday was spent sorting out provisions, cleaning, etc., above deck, while Wayne scraped and chipped barnacles off the rudder, prop and bow thruster. This hadn’t been done since Madagascar, four months previously. The water here is much warmer than in South Africa so the task, although arduous as usual, was bearable and refreshing. After a few hours after finishing my jobs, I hopped in to scrub the waterline and down as far as I can go on a breath, while Wayne used scuba to reach the deeper bits. With a clean bottom, washing done, and topsides rid of clumped salt, it was time to relax and we joined Brian and Rowley on Coruisk for a quiet one that evening. 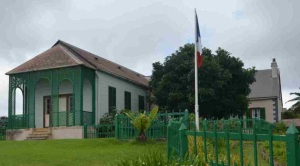 A group tour had already been booked by Brian so on Monday, nine of us were driven around the island by an octogenarian fellow named Robert. With his folder of photocopied photos and his affable style he told us a little of the history of the island as he went. He would tell us about the things he did as a boy, the type of work he and his family did, and so on. Our tour include a visit to Longwood House ‘Maison de Napoleon’ where Napoleon Boneparte was held from 1815, and eventually died in 1821 (not sure if he died from living in a cold damp mouldy environment, cancer or boredom!). The home was quite grand and recent renovations make this an interesting must-see for anyone visiting the island. Although Napoleon’s Tomb is also on the itinerary, Napoleon himself isn’t actually in the tomb as his remains were taken back to France in the mid 1800s; so really all you’re looking at is a concrete slab with a fence around it! 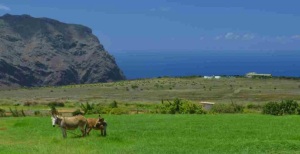 Another key stop is the local boutique distillery where Tungi, rum, gin, coffee and lemon liquors are made, mainly from local produce (although sugar is sought from South Africa, juniper, lemon, prickly pear, and coffee are from the island). The unique bottles are designed to represent the steps of ‘Jacob’s Ladder’, the steep steps in Jamestown.

After some tastings and a purchase of the local drop, we were driven out to view the construction of the new airport! Now this may seem a little odd and not the most touristy thing to do, but this remote island is only accessible by ship, or passing yacht. I believe that this year the airport will be open to non-commercial flights and from 2016 commercial flights will bring tourists to the island. This will bring a lot of change to the island I suspect; hopefully for the better.

A simple lunch at Regies Take Away near to the airport. For a few British Pound (which are interchangeable here with St Helena’s own Pound), we indulged in a ‘Beef Dodown’ and Fries. I asked what was in a ‘dodown’ and was told “Meat, potato, flour, anything really…”. Anyway it was tasty enough!

On the drive back to Jamestown we stopped briefly at the Plantation, residence of the current Governor, then onto the High Knoll Fort, both built in the 1700s. We also learned that over 6000 Boers were brought to the island in the early 1900s. It was a long day – eight hours in the back of a small pickup, but it was enjoyable enough driving over this mountainous and geologically interesting island with Robert stopping every so often to give us a chance to see the views and learn a little more of the island. The day ended with a great evening aboard yacht Gromit for a potluck joined by the crews from Rhythm and Dayo 1.

Internet in this remote location isn’t freely available like anywhere we’ve been. It’s expensive and limited to wifi at Annie’s or the Consulate Hotel. But that’s okay. Nine days at sea with no internet is actually quite liberating and I wasn’t in a rush to get online.

Tuesday we spent the day by ourselves traipsing around the fascinating colonial village of Jamestown. Jamestown is situated in a deep valley with high cliffs to the north and south. ‘Jacob’s Ladder’ or the Inclined Plane was constructed in 1829 and 699 steps takes you up a steep gradient to the views above the town. Not too sure who Jacob is but he must’ve had strong legs!

The people of St Helena, or ‘Saints’ as they call themselves, have a curious dialect. Although they speak English, there’s an intermingle of dialects that are hard to pinpoint, even the locals aren’t sure where it comes from. Walking down the street you’ll be greeted by friendly locals with a wave or a “Hullo luv”. There are no indigenous people here and the identity of the small population of around 4000 is the result of people from passing ships over past few hundred years – former slaves, people brought here from Indonesia, West Africa, and from other countries along the East India Company route. When asking our guide at Longwood House, a softly spoken old dear, about her heritage she merely said I don’t know, “We’re a mixed race really…”.

Tonight we’re catching up with the crew of Imagine – Shelia, Stuart and Dale – and Wednesday after a few last minute jobs, we plan to check out of St Helena to leave on Thursday.

This next passage will be our longest – 3500nm to the Caribbean! Should take us between 25-30+ days. I can’t say that I’m thrilled with the prospect of being on the boat that long, but by all accounts we should have fair weather for most of the trip, but I’ll tell you all about the exciting times ahead with satphone updates.

Sailing the world aboard Blue Heeler
View all posts by blueheelerhr39 →
This entry was posted in 2015, South Atlantic and tagged Atlantic, St Helena. Bookmark the permalink.