Yacht club next to bridge 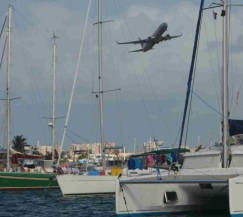 Jets scream above the anchorage during the day

Saint Martin Island is divided between the southern Dutch side, and the northern French side. Already we’ve been anchored in the lagoon at Sint Maarten (Dutch side) for one week. To enter the lagoon requires you to wait for the bridge to open at the southern end of the island at Simpson Bay. We anchored outside for a couple of hours then dinghied into the lagoon to see how full it was, but in fact there was plenty of room for us. Next to the bridge is the Customs and Port Authority where you can get your passport stamped, clear in then pay for the bridge entry and anchoring fee (US$21 and $20 respectively). USD are widely accepted on this island.

Nearby are our friends on La Luna and others we’ve met along the way here. Once again we spend the first few days getting our bearings and locating all the places to get food, phone and funds.

The boats on the southern (Dutch) side of the lagoon are a mix of Dutch and German waiting for a weather window to head back to Europe, a sprinkle of Aussies and Kiwis only halfway through their world journey, and a mass gathering of Canadian’s on their way back north. The balance is mostly cruisers from the USA waiting to head north, or south – either way out of the hurricane belt. The French cruisers prefer the French side of the lagoon in Baie du Marigot, bien sûr!

Echoing through the lagoon each morning at 7.30am on VHF channel 10 is local nautical entrepreneur Mike “Shrimpy”, who announces the weather, lost and found, calls for buy/sell/swap and general announcements for yachties. It’s a good way to share information to the cruising community. Screaming above the lagoon at various times throughout the day are huge jumbo jets and small planes as they fly to destinations around the Caribbean and the world from the nearby Princess Juliana International Airport. A hot tourist spot – one hour walk to the southern end of the airstrip at touristy Maho Baai you can get really close to the action as planes approach the runway above a small beach. If you’re lucky you can hold onto the fence and get sandblasted for fun!

Less than a mile from the anchorage is Lagoonies Bar you can get a cheap brew from 5pm and if you’re lucky you can tap into their wifi and catch up with other yachties. Closer to home is the yacht club next to the bridge where drinks are a little more, but the wifi seems stronger. With all the modern conveniences available to us around the lagoon, I’m surprised with the lack of good internet available to cruisers. A local business rents out dongles but that service costs US$50 per week with no guarantee it will work within the lagoon. For us a couple of drinks at Lagoonies Bar or the yacht club at happy hour allows us to check emails and if we’re lucky, surf a little too. Unfortunately I cannot call my family back in Australia – not only as they are 14 hours ahead and just getting up as Wayne is downing his first beer, but the signal is too weak to call on Skype. Most importantly though is getting weather information for our voyage. We are in no rush and will wait until the northern weather settles a bit before we head north. A tropical storm is sitting east of Florida and north of the Bahamas so we are keeping an eye on that.

As expected on the Dutch side of the island Dutch is spoken, and on the French side, French is spoken – makes this tiny island interesting to visit. Coming from Australia with no country borders or different languages it offers a small taste of Europe. I spoke to a laundry lady the other day and all she spoke was Spanish and a smattering of English so pushing aside my newly learned French and delving into the depths of my grey matter I quickly recalled the three years of TAFE Spanish that I finished over ten years ago and managed to converse with her with a mixture of Spanglish!

With over 1500nm to reach New York there’s a few small jobs we need to do for the forthcoming voyage. In Coles Bay near the lagoon are two large chandleries, allegedly the largest in the Caribbean, Island Water World, and Budget Marine. Although not necessarily the cheapest products, they certainly have a good range if you really need items. An electrical shop, Electec, near Island Water World has a good range of electrical stuff too. Supermarkets are everywhere so you have no problem getting supplies. A good book to have in this region is “the Cruising Guide to the Leeward Islands” by Chris Doyle which has loads of information for cruisers.

As people wait for their respective weather windows, some enthusiastic sailors organise social events – whether it be a family day at one of the nearby beaches or perhaps Dinghy drifting…an alternate merrymaking activity for cruisers. At first glance it looks like a huge mass of flotsam in the twilight until you see heads with torches and hear shrieks of gaiety as they float along in the current sharing one-pan meals and snacks.

So now we have a few days before we head north. By June we hope to sail into New York…

Sailing the world aboard Blue Heeler
View all posts by blueheelerhr39 →
This entry was posted in 2015, Caribbean and tagged Caribbean, St Martin. Bookmark the permalink.