To end our busy first week in NYC, and get the most value from our expiring Metro ticket, we went further afield to the burroughs of Harlem and Brooklyn. Rather than take the subway from 79th to 135th, we decided to walk up Broadway to look at the variety of shops and a bit of people watching. On the corner of 112th and Broadway is Tom’s Restaurant (famous as Seinfeld’s diner hang-out and Suzanne Vega’s inspiration for her song ‘Toms Diner’). It’s obviously different inside, but we stopped anyway for a typical New York lunch – I had a Reuben sandwich (corned beef, sauerkraut, melted Swiss cheese and fries) while Wayne had layers of pastrami on rye with a side of fries. With full bellies, we waddled further up Broadway to 116th Street we caught the subway to 135th Street where we would begin our walk through Harlem. 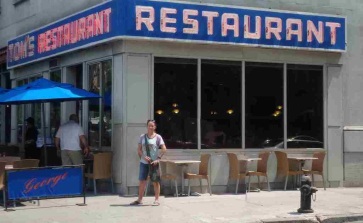 On 138th Street in Harlem is Striver’s Row, where during the 1920s and 1930s wealthy, professional black folk moved into the brownstone homes. Around this area is where a young Billy Holliday grew up, later to perform at local clubs. Walking east we crossed Clayton Powell Junior Boulevard then across Malcolm X Boulevard (Lennox Ave), then zig-zagged our way south until 125th Street. The famous Apollo Theatre on west 125th Street still stands and has amateur night on Wednesdays. Legends like Ella Fitzgerald, Duke Ellington and James Brown had their beginnings at this legendary club along with many, many fantastic artists.

This area of New York is different from Lower Manhattan. Puerto Ricans and African Americans make up the majority in this neighbourhood. Apartment buildings spread over large blocks are tidy with children’s play areas and gardens. The buildings aren’t as glamorous nor are they as high as lower down Manhattan and not as many tourists up this part either.

125th street is lined with hawkers, t-shirt sellers and hip-hop artists peddling CDs of their music; most probably hip-hop. After trying to avoid one of these peddlers (who introduced himself as Bruce), he waved us over and said that I (as a white person) must be scared of him (a black person in Harlem), but I said no, I just don’t like hip-hop and didn’t want to part with my money! Strolling further along the street we heard a loud ‘BANG’. I jumped and immediately thought the worst, before realising that a guy lugging a bunch of helium filled balloons had inadvertently walked under a tree popping a couple of the balloons on the branches as he went!

Uncanny how my frock blends into the street art!

Turning a corner to catch the subway at the corner of St Nicholas Ave and 125th, the surroundings deteriorated. Suddenly facing me were people who looked like the cast of movie World War Z! Bloated stomachs, scabby faces, blank eyes, pink lipstick lavishly spread over pouting lips and short skirts revealing more than I can mention here – oops wrong street! I turned, grabbed Wayne and scurried quickly into the nearby subway like a rabbit into a burrow.

The following day we took the subway to Brooklyn. This was a Friday so people were out and about working, playing in the park, shopping and going about their usual business. Throughout New York there are heaps of old homes where a famous so-and-so used to live, or so-and-so wrote a book, etc. but you can read about these elsewhere. Suffice to say that zig-zagging through the suburbs you’ll see some beautifully restored brownstone homes and tree-lined streets, in addition to ordinary neighbourhoods. Walking along 8th Avenue reminded me of Melbourne’s Centre Road in Bentleigh area – a variety of shops to serve the community including cafes, diners, hardware, etc. We stopped at Rachel’s for a Mexican feast – soft tacos, black beans and rice – yummo! I haven’t eaten genuine Mexican food for years! Including a beer these huge lunchtime meals were only $8.95 each (plus sales tax and plus tip which is unavoidable).

There’s still plenty to see and do within walking distance of the 79th Street Boat Basin. On the northwest corner of Central Park is the Museum Mile. Here (you guessed it) are the museums – the NY Museum of Art, Natural History, the famous Guggenheim, and the Museum of New York. Each are interesting in their own way, but I only visited the Museum of NY, having had my fill of dinosaur bones and Egyptian relics over the years.

Strolling through Central Park it’s hard to believe that this was the home for crack-heads, prostitutes and evil-doers not so long ago. The clean up of NYC is incredible and worth Googling to learn how they achieved it. Now on the weekends the park is brimming with happy people, dogs, prams, bikers, and people just sitting relaxing. At the northern end is the huge Jacqueline Kennedy Onassis Reservoir giving New Yorkers and sample of the great outdoors. It’s actually very pleasant walking through the park. We even found a waterfall.

Soon enough you’re back on Central Park West heading southwest towards Broadway and 79th. On the corner of 81st and Amsterdam is the wonderfully stocked Zabar’s Delicatessen – one of many fantastic purveyors of fine food in NYC. Cheeses, meats, coffee, breads, babkas, delicious food and produce are on the ground floor, while upstairs are thousands of types of coffee pots, kitchenware, Soda Stream supplies and heaps of other kitchen and catering items. It’s not cheap here but I spent at least half an hour walking around looking at all the food! Remember we’ve been sailing in out of the way places for the past year and the abundance of food here is truly amazing. I do often wonder what is done with all the food once it’s beyond it’s expiry date…

We’ve been lucky with the weather. Although our initial arrival was very cold, the days have been surprisingly warm, sunny and muggy. But today as I ventured out the rain has come so I’ve taken shelter at McDonalds for a $1 coffee (plus tax) and wifi (free).

Later this week we will start north up the Hudson for our journey along the Great Loop but there’s still a few more days left in NYC.

Sailing the world aboard Blue Heeler
View all posts by blueheelerhr39 →
This entry was posted in 2015, New York and tagged Great Loop, New York, USA. Bookmark the permalink.