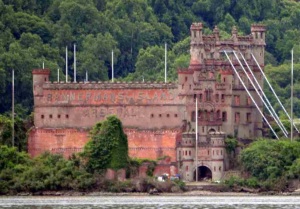 Interesting places along the way

We left New York City on Friday 19th June and haven’t gone far over the past week. After passing under the George Washington Bridge, we motored 40nm the first day to anchor on the western shore at Cornwall-on-Hudson. During the day we passed the infamous Sing Sing Prison. This prison was built in the 1800s and New York’s convicted criminals were sent ‘up the river’ for imprisonment or to wait on death row before a prearranged meeting with “Old Sparky”. Around the corner this particular weekend at Croton-on-Hudson was the Clearwater Music Festival where musicians from around the U.S. gather and play to the masses. Clearwater is an environmental action group making great efforts to help keep the Hudson River clean. Have a read of their website. As much as we would have liked to stop and enjoy the weekend, unfortunately we simply can’t stop everywhere and see everything.

A little ways further at Buchanan, the Indian Point Nuclear Power Plant (only 50kms from NHC) sits idle and ugly along the banks of the Hudson. Apparently fires in May this year at the plant resulted in thousands of litres of transformer oil spilling into the Hudson River. I’m sure the Clearwater committee was onto this!

The Bear Mountain fixed bridge with a 155′ clearance joins the green hilly east and west banks together and on the west is Bear Mountain State Park adjoining other state parks. It’s easy to imagine this area covered in winter snow and ice. The thickly vegetated banks of the Hudson River disguise high rocky cliffs on the western shore, while a railway track runs along the eastern and western banks. There is little boat traffic, with a few barges, tugs, and other small ships running up and down river. Along the riverbanks are huge double storey houses with sweeping green lawns and massive green deciduous trees, some of which are producing nose tickling pollen. Further on the western shore is the impressive West Point Military Academy which covers a huge area of real estate.

Tugs push, not pull, barges up or down the river and usually travel faster than us so it’s best we keep out of their way. It’s easy motoring but we must pay attention to our surroundings. A loud blast from behind us seemed to be a passing tug indicating his intentions to pass us to port, when in fact we’d heard the blast from a passing train!

Summer weather is stuttering in – one day it’s a humid 26degrees followed by a cold 15degrees (yes, for us that’s cold! Wish I had my Ugg boots). Humid conditions, then cold rain create a spicy smell of wet trees and dirt. 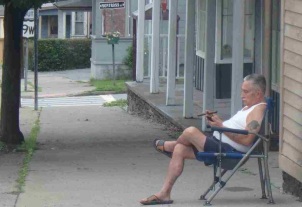 Entrance to Esopus Creek Saugerties. You can stay at this place, but there’s a two year waiting list!

Our next stop 47nm further on was in the Esopus Creek near Saugerties. It’s a narrow creek with just enough water under the keel to drop the pick. This anchorage was quiet except for the twitter of birds and roar of trains in the distance. We anchored very close to houses – this is a first for us – and it’s a little like camping in someone’s front yard! 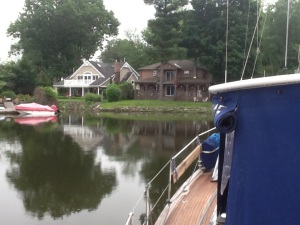 While the U.S. celebrated Father’s Day, we took a walk along the main street of Saugerties where there are many thrift stores, pet boutiques, eateries and trinket shops for weekend tourists.

Throughout the town were toy cars decorated creatively as part of an artistic competition. Eager to keep going though we left the creek on a high tide and headed 10nm upriver to the town of Catskills.

The water is flat and in the shallow banks is a field of water lilies. I almost expect a hippo or giraffe to appear – it’s only been a few months since we were in Africa after all! 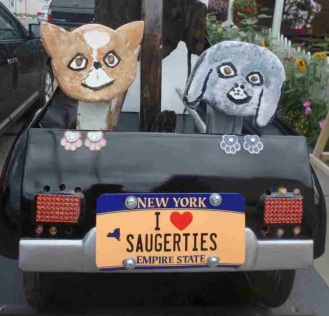 but this car was at Saugerties

Catskills has a place in American frontier history. Now it’s a popular place for city folks to spend the weekend – it’s about a two hour drive from NYC. It’s also where yachties can get their masts unstepped for the journey along the Erie Canal. While prices between the Riverview Marina and Hop-o-Nose marina were similar (from $150+ for the crane plus dockage of around $1.50 per foot. More if you had them make the wooden frames) Wayne decided we’d go up to Castleton to do the work ourselves.

With Denise and Etienne we walked about 1km away to buy groceries at Walmarts and some hardware from a massive hardware outlet, Lowes. Prices are cheaper than in New York City, as we figured they would be. A U.S. gallon of petrol is $3.10 (that’s around A$1 per litre). Diesel is a little more. We stayed one more day at Catskills as a thunderstorm was headed our way and we wanted to be sure we were safely anchored. The main township of Catskills also has a creative artistic competition but in this town decorated cats (of course) are placed around the village for passers by to consider.

The Dutch arrived in this region in the early 1600s but didn’t stay long before the British took over. The Catskills Mountains are the heart of the American frontier and where many settlers began their journey west. Samuel Wilson or “Uncle Sam” supposedly lived here for a time as a government meat inspector in the early 1800s. Many Dutch place names still exist (such as ‘Kaatskills’). The scenery here is really pretty.

The story of Rip Van Winkle is set in a little village in the Catskill Mountains. Rip is a hen-pecked easygoing Dutch guy who managed to sleep for twenty years and miss out on the Revolutionary War. When he wakes he discovers everything and everyone in his small village has drastically changed, but he also discovers his nagging wife is dead! Rip also discovers that life has passed him by. He slept through political, social, and economic changes and returns to his village ignorant but harmless. I’m glad we have internet otherwise we might return to Australia after 20 years ignorant but harmless!

Sailing the world aboard Blue Heeler
View all posts by blueheelerhr39 →
Aside | This entry was posted in 2015, USA & Great Loop and tagged Castleton, Catskills, Great Loop, Saugerties, USA. Bookmark the permalink.

5 Responses to Great Loop – Week 1 in the Hudson Valley