We arrived at Lyons the “Peppermint Village” by 3pm and tied up to the welcoming concrete dock on the north wall before lock E-27. I was expecting to find heaps of boats here, but we were the only ones. We’d read good reviews on ActiveCaptain and were looking forward to meeting some locals.

Welcome to the Peppermint Village of Lyons

Lyons is in Wayne County which pleases skipper! Lyons has excellent facilities for boaters – four-star shower facilities are available at the fire station; free wifi; water and 30A electricity – all free! We spoke to some of the volunteer firemen who are most friendly and hospitable. 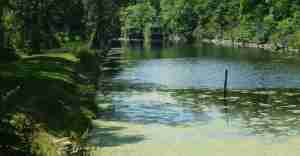 At the dock a large town map helps you get your bearings and highlights places of interest. Copies of the map and other local pamphlets are available at the fire station when you sign in. Also available was a cycle map of the area. Apparently this cycle map was produced by a local man just a couple of weeks before our arrival and we would be one of the first to test it. The cycle route takes you east along the Old Highway 31 stopping at various times to view the old Erie Canal locks, cobblestone homes, then back along the corn fields and country roads to bring you into Lyons from the north. This easy route takes about an hour and is around 15kms. 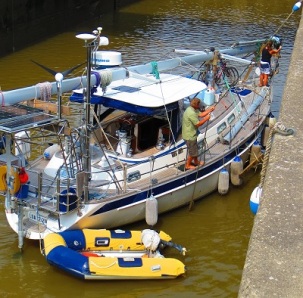 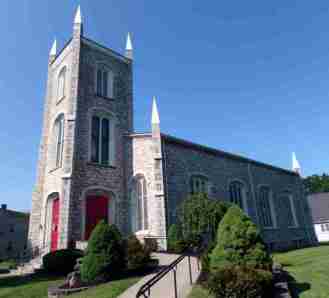 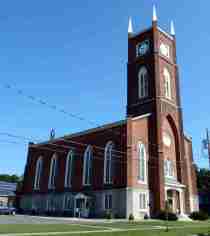 Enjoying the tranquility of the Old Erie Canal route 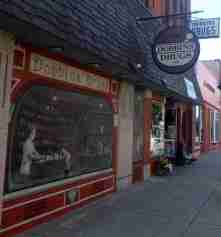 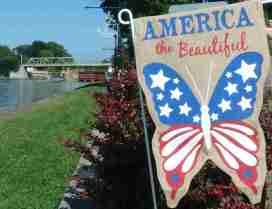 Another example of a beautiful historic home, Lyons

Once known as the ‘Peppermint capital of the World’ Lyons is now known as the Peppermint Village. The Hotchkiss family produced much of the peppermint oil in the USA and around the world. The factory shut down about 30 years ago and the Hotchkiss family is no longer. To celebrate the legacy of the Hotchkiss family, each year Lyons hosts a Peppermint Festival. This year on the weekend of the 16-19 July, but unfortunately we are unable to stay around for it. Each town and villages along the Erie Canal have events, but we seem to have been unlucky with our timing.

Ally and Bob Stopper our ‘greeter’ at Lyons

At the Lyons dock you may be welcomed by a town ‘greeter’ – a member of the community who welcomes boaters and provides a brief history of the town and local information. We met Bob Stopper at Lyons. Bob was responsible for producing the town map which is on display at the dock, and he also has his own blog for the Wayne County.  Bob farewelled us at the lock and took a few photos of us to put on his blog. Thanks Bob!

The Erie Canal east of Lyons follows in most cases natural waterways, while west the canal was dug out until Lockport. Therefore we have no electronic charts of the canal. But of course we don’t need charts as the canal is only 60′ wide so it’s not like we’re going to get lost! A couple of things for boaters to consider – many of the bridges are made with huge steel beams and passing under them your boat compass controlling the auto pilot can unexpectedly veer you off course. Although the canal is supposedly dredged to 12′, on many occasions we have around 3′ (1m) under the keel and much less at times. As small streams or rivers flow into the canal the depth drops at these intersections as the silt around the waterway builds up. Full attention is needed when boating through the canals. 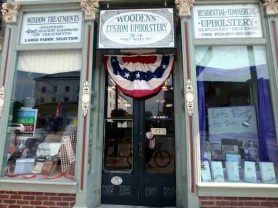 Facilities for boaters at Palmyra

We motored 15m west until we reached Palmyra. There is a lovely dock area for boaters with showers, toilets, water, pump-out facility but unfortunately it doesn’t have the depth to allow for our draft. Disappointed we went a little further to the south/east wall of lock E29, but this wall had a row of barges tied to it. However, through the lock we then tied to the south/west wall of the lock. There wasn’t much to tie up to and all we had was a central bollard which we had to tie the bow, stern and spring to, and load the bow and stern with fenders as Blue Heeler tended to ‘pendulum’ on the lines. Next to us is the Palmyra Aqueduct Park with the remains of an old aqueduct from days gone by.

The town of Palmyra is a short cycle ride one mile to the east. We visited the dock facilities, mentioned earlier, and rode around town, stopping to take pictures of the churches and historic homes along Main Street. Nothing was open before 10am so it was very quiet. In 1830, Joseph Smith, the founder of Mormonism was only 24 years old when he published and printed the Book of Mormon here in Palmyra. Within a few years the Church of Latter Day Saints, or Mormons, had thousands of followers. 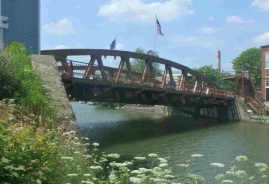 Before lunch we cast off and headed west only nine miles to reach the town of Fairport. This day was hot and humid signalling another thunderstorm was on its way. We docked by lunchtime on the northern dock at Fairport before the lift bridge. It wasn’t long before a dock master came by to greet us. The facilities here are very good – we have power, wifi, water, and ablution facilities worthy of a four star hotel, but you will be asked to pay for your stay – we paid $9 per night. Supermarket shopping isn’t close by, and the massive Wegman’s supermarket is about three miles away. There is no laundromat in town either.

The Ice Cream Factory near the dock offers huge helpings of ice-cream – I recommend the ‘kiddies’ helping for those watching their weight! On the northern side expect to spend a lot of time chatting to passers-by. It seems that a yacht from Australia is quite unique in these parts and we have many people stopping for a conversation or to tell us they have a relative that lives ‘down under’ and so on. We enjoy talking to the locals and boaters along the way and learn a little more about each town that way. Another boater with a car offered to take me to the supermarket, which was extremely generous of him. Folks are friendly in these parts!

The next morning in the cooler conditions, we threw off the lines and called up the lift operator on channel 13. He responded immediately and lifted the bridge within a few minutes. The lock and lift operators are all very responsive and we usually don’t have to wait long to pass through or under.

Heading west we passed through the intersection of the canal and Genesee River, which heads up to Rochester. There is supposed to be a couple of docks available up this river, but our information on depth wasn’t very good so we decided to continue on to Spencerport where in the Waterways Guide it’s written to be ‘the best place to stop’ on the Erie Canal (as is Fairport, Lyons, Holley and many other places!).

Now I don’t know what defines the ‘best’ stop but Spencerport is certainly at the top of my list. We arrived mid afternoon and berthed on the east/north side of the lift bridge. No cost to stay here but a donation is welcome at the Visitors’ Centre on the south side. The south wall before the lift is a stones throw to shops, laundromat, showers, etc, but the depth showed zero when we tried to dock. North wall is handy enough and we have electricity but no water.

Al, the friendly lock operator, took time from his bridge painting to greet us and give us the code to the showers and ablution block located on the south bank under the Visitors Centre. A short walk away through a delightful village of new shops, cafes, hairdressers and banks is a Tops Supermarket, laundromat and other shops. (Tip for boaters: when you first shop at Tops Supermarket get yourself a discount card and get really good grocery bargains!). This night we went to the nearby Texas BBQ for dinner for a burger, fries and deep fried okra…

The next day the sun was shining and the weather a little cooler than before the thunderstorms. Our goal was to burn off some fried food and ride to Lake Ontario along the Genesee Riverway Trail. Our route would take us back towards Rochester then north along the trail – a distance of around 24kms each way. It would have made better sense (and a shorter route) to do this from Rochester, but as I mentioned earlier we didn’t stop there due to our draft. The roads were a little crappy at some points, but generally the ride was good and the drivers aware of cyclists. We ended up at the widespread Holy Sepulchre Cemetery and eventually found the trail and followed it up to the Port of Rochester and Lake Ontario. Along the trail was a long boardwalk over a wetland area – really well done and quite beautiful.

We returned back at the boat by 3pm, a little tired after our 50km round trip (Wayne said his bum was so sore “it’s like I’ve been in prison for a week”. Ha ha!). That night to replenish our depleted fat stores we went to the Galley Restaurant located on the south dock, and had chicken wings smothered in hot sauce, plus a basket of fries smothered in meat and cheese. Oh dear, better have a salad tomorrow.

Today we are going only a little further to Holley. We are only 50 miles from Lake Erie and Niagara Falls. The next stage of our trip looms as we begin to plan restepping the mast. 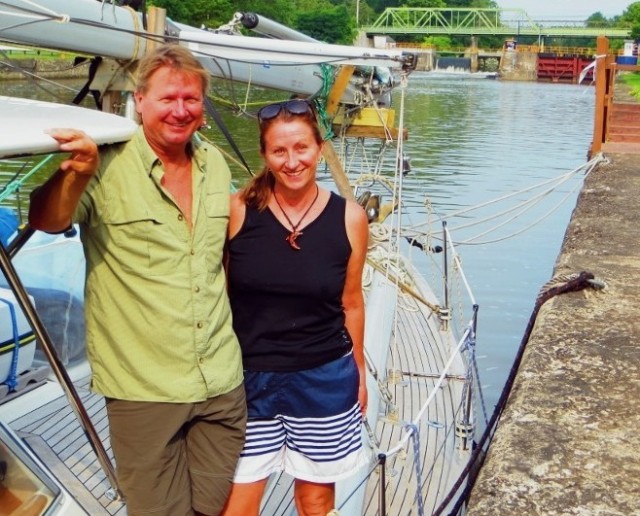