From Spencerport we travelled 12 miles, passing through Brockport then onto the small town of Holley. Along the way we passed under four lift bridges. Once again reviews of this town in ActiveCaptain are positive. The Waterways Guide generously states “one of the nicest stops on the canal”, as are many other towns referred to in the guide. At the dock we have water, electricity, pump-out and an ablution block – again no cost to visitors.

Barnyard mural adds an artistic touch to the trip

At Holley there is a scenic waterfall and park within walking distance to the dock. Also within walking distance is a Save-a-Lot supermarket, a bakery and a laundromat. On Friday night at the gazebo on the dock a small ‘rock’ band belted out a few golden oldies and some country songs for a couple of hours to entertain the handful of boaters and locals.

The Erie Canal and industry within the towns could not have been built without the huge number of early settlers and immigrants. As you travel along the Erie Canal and soak up the history, you’ll notice the familiar names from this early European colonisation. Town names such as Amsterdam, Rotterdam, Rome, Geneva, Poland and even Liverpool. Only yesterday we cycled through Greece and today we’re not far from Sweden!

Drive in, I mean bike in ATM!

After our ride around Holley we rode back along the Canalway Trail to visit Brockport. Here along the main street are lots of interesting shops and an impressive Visitors’ Centre that even offers free bikes that boaters can use!

After visiting the local bike store and riding into the drive-in ATM, we rode back to Holley some 9kms west. It was drizzly and the roads were wet. Unfortunately for Wayne his ‘slick’ tyres slipped on the wet metal bridge and he lost control of his bike. He slid and inadvertently grabbed his front brakes, managed to pirouette on his front wheel for an impressive couple of seconds (I’m sure I heard a drumroll and rimshot!), then hurled his entire body over the handlebars only to crash on the bitumen path with the bike landing on top of him. I worriedly asked if he was alright and he checked himself for breaks and cuts. He was okay and jumped quickly on his bike to flee the scene in case the accident was scooped for the Brockport News! I was relieved that he hadn’t broken any bones (particularly in the USA where health care is very expensive). Now we’re getting old so we’re not as ‘bouncy’ as we used to be!

During the night in the wee hours a big thunderstorm passed by and washed the deck and filled the dinghy. Weather forecast was for steamy days followed by more thunderstorms. It feels almost tropical. In the steamy conditions after breakfast I walked to Holley’s supermarket while Wayne topped up our water. The supermarket didn’t offer much variety, but I found most things and returned to Blue Heeler with full bags.

Medina is only 19 miles from Holley. We usually go no more than 20 miles in a day – about four hours motoring which is enough time to get somewhere plus gives us the afternoon to ride or walk around. 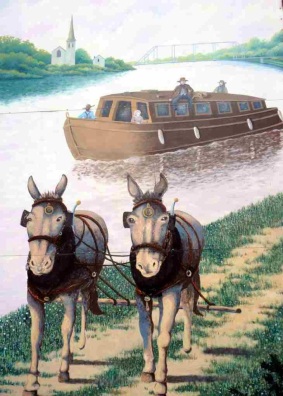 ‘Ole Sal’ along a towpath – mural at Medina

Facilities at Medina for boaters 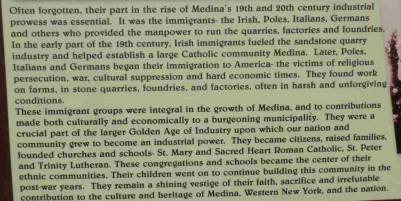 Medina (pronounced (Meh-diner) is a pleasant enough place to stop and as it was a Saturday it was very quiet in town. The dock is long enough for many boats – we berthed at the end closest to town near the short wooden docks and there was plenty of depth for our keel. To use the ablutions you need a code, which the lift bridge operator will pass onto you. For those interested in trains there is a railway museum to visit. But for those with more of an interest in cold ice-cream there is Meggie Moos Ice-Cream Parlour!

Medina is famous for its sandstone and many of its historical buildings are constructed from sandstone. Like so many towns in New York State, immigrants from Europe came to this area in the 1800s to escape persecution and worked hard to build their lives in these new communities.

Thunderstorms again last night washed the dust, leaves and dead grasshoppers from the deck. A quick top up with water and electricity from the dock and we headed towards Medina’s lift bridge. Calling the operator on VHF13 we had radio silence. I then tried to phone the Medina lift bridge by telephone using Skype, but again no answer. I phoned the previous lift bridge at Knowlesville and the operator answered. His job is to manage both lift bridges so he would come by to let us through within ten minutes. At this point we were only 20 miles from Lake Erie.

We arrived at the south wall on the east side of the lift bridge at Lockport. We were cautioned about coming here, both for lack of facilities at the dock and the town isn’t as appealing as the smaller villages. Once we saw the dock we understood why. The sloping concrete dock has a wooden boardwalk built over it with wooden posts nailed to the edge, so there was nothing for our fenders to ‘fend’ against. Using our two wooden fender boards, we setup the fenders and boards in such a way to fend against the wooden uprights. There are no facilities at this dock. No toilets, water, electricity – only a few toothless fishermen! I grabbed my bike and rode around the empty town, to Locks 34 and 35, and the old Flight of Five series of locks. It was a Sunday so the town was deserted. The only reason we stopped was because of the annual Canal Fest in Tonawanda which runs 19-26 July. We figured that arriving there on Sunday may have proved difficult in getting a berth.

On Monday we left Lockport and travelled through the two final locks of the Erie Canal on our way to Tonawanda. These two locks, located immediately next to one another (each with a rise o 25′) lifted Blue Heeler 50′, so our elevation is the same as Lake Erie – 570′ above sea level.

We had hoped to berth at Tonawanda, but the week long Canal Fest had attracted many people. The north and south docks were full of power boats, canal boats and other small craft. There was no room for us and it wasn’t ideal to raft up our 12tonne boat against a small power boat. Although we had wanted to stop here to stock up our food and ride to Niagara Falls (20kms away), plan B was to continue on to Rich Marine Sales about 5m south just outside the entrance to Black Rock Lock. This is where we would restep the mast.

On Tuesday thunderstorms were forecast to arrive around lunchtime, but Wayne had arranged for the yard hands to step our mast at 8.30am. The thunderstorms came in early, and swiftly the four guys managed to lift the mast onto the dock before the heavens opened up. While they went away and had a coffee to let the rain pass, Wayne and I put on our raincoats and continued the job of removing ties and setting the halyards and lines in their correct places. 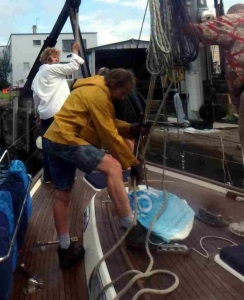 By 9.15am the guys returned and the thunderstorm passed. By 9.45am the mast was stepped and we thanked the guys for their work. We motored back around to our shallow weedy berth to fine tune the rigging and for the rest of the day we put Blue Heeler back together, ready for sailing the Great Lakes. Near to Rich Marine are two chandlers – West Marine and Obersheimers Sailor Supplies – and a Tops Supermarket is about 10 minutes ride away. There are some eateries nearby, but this is no longer the touristy Erie Canal!

Making use of the fine weather we went on a long ride to Niagara Falls along the Seaway Trail. Now, this bike ride would’ve been shorter from Tonawanda (about 26kms) shorter. As it turned out we cycled almost 70kms from Rich Marine all the way along the river to Niagara Falls. From Rich Marine the bike path is easy and goes direct to Tonawanda, about 13 kms away. From Tonawanda, the path then follows bike paths and roads for about 20kms. As you approach the falls the clouds of water spray are visible from a few kilometers away.

A 70km round trip on the bikes was worth it for this view!

It’s not often we get a chance to visit somewhere where we’ve been in the past. We last visited Niagara Falls in March 1992 after winter. It seems more spectacular than I remember from years ago. Back then I kept diary notes and my recollection was there were more shops closer to the falls, but maybe time has distorted my memory. Either way the park above the falls has more trees and paths, and is now more in tune with nature.

Here’s an interesting tidbit: The first person to deliberately go over the falls in a barrel was a woman. In 1901 at the age of 63, Annie Edson Taylor, an American adventurer thought it was a good idea to go over the falls in an effort to gain celebrity status and therefore money to get her out of the poorhouse. She wasn’t entirely successful as her manager ran away with her barrel and she spent what money she did have on a private detective searching for it! Anyway, she lived to a ripe old age of 82 and died in Lockport. Good job we have pension plans nowadays! 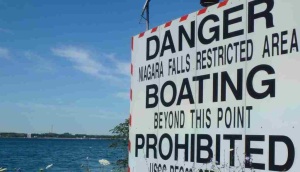 On the way back we stopped at Tonawanda’s McDonalds for lunch and free wifi then took a stroll around the Canal Fest festivities. All sorts of crazy, gut-churning rides, food stalls offering hot dogs, fried dough (a local delicacy) or French fries, and other fairground stalls were on the south bank, while more eateries, live music and Police dog demonstrations took place on the north bank. Along the river we could see that boat traffic had increased since we passed through on Monday. In some cases five boats were rafted up to the dock. There’s no way we could’ve rafted up to the power boats at the dock. It’s a little crappy at the marina we’re at, but at least it’s home for now. A quick grocery shop at Tops then we cycled our weary bodies back home for a hot shower and a big dish of Thai Green Curry!

It’s been five weeks since we began our journey from New York City and now we commence the next stage of our trip. Over the next six weeks, we will head west through Lake Erie, up the Detroit River and Detroit, Lake St Clair, then north through Lake Huron. From there we’ll head east into the highly recommended sailing ground of Georgian Bay in Canada. We’re hoping at this point to hire some wheels and drive around the east of Canada; something we didn’t do when we were last in the region, 23 years ago. Next we head back through Lake Huron to Lake Michigan and in late summer we plan to be in Chicago. We have a lot of water to cover, but with our sails back in action we can make some miles without bridges or locks to slow us up. 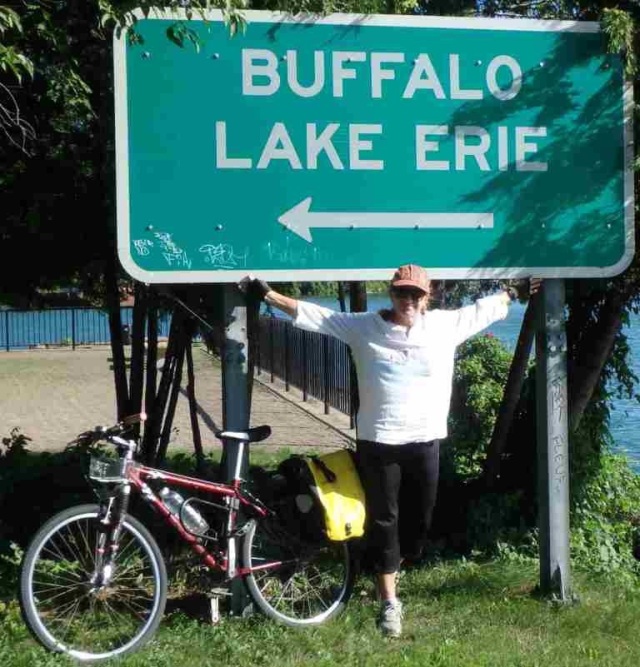 Sailing the world aboard Blue Heeler
View all posts by blueheelerhr39 →
This entry was posted in 2015, USA & Great Loop and tagged Great Loop, Niagara, USA. Bookmark the permalink.
%d bloggers like this: