At Jackson Park Yacht Club, seven miles south of Chicago we unstepped the mast and stowed it on deck. Using the club’s small wooden gin pole, Wayne, myself plus Daryl, while a friend of his operated the gin pole, positioned our heavy 50′ mast and tied it down using the wooden struts from our previous unstepping. At the club we met Daryl, Tony, Arlice, Michelle and Harbourmaster Joe. This friendly bunch invited us to attend Joe’s birthday in Chicago on the Saturday night, but with gale force winds due that day it was a shame that we couldn’t make it as we’d planned to get the boat into the safer river. Happy birthday anyway Joe!

Entering the Chicago River through the lock you’ll get fantastic views of the city. We passed through the first of ten locks along the 327 mile journey to Grafton, Illinois where it intersects with the Mississippi River.

Travelling through Chicago city on the river is something many tourists do, but unlike ‘normal’ tourists, our journey took us further into the boondocks; areas where no tourist goes. Homeless people camp on the sides of the dirty river while around them manufacturing plants and factories emit questionable particulates into the atmosphere and who knows what into the murky river.

Looking back into Chicago

Condoms, dead fish and rubbish threaten to suck into the engine’s cooling intake as we travel along the Sanitary and Ship Canal. Prior to the canal’s construction, sewage from Chicago used to flow into Lake Michigan, but as the lake was also the drinking water the potential for disease was high. Built in the early 1900s as an engineering marvel of its time, the 28 mile long Sanitary and Ship Canal is designed to flow water away from the lake – the other direction – taking effluent away from the lakes. The canal also connects the waterways of the Great Lakes to the Mississippi River via the Illinois and Des Plaines Rivers. The canal continues to carry Chicago’s treated sewage into the Des Plaines River.

The canal water is quite toxic – I think if I fell into the water I’d dissolve like a soluble aspirin! In fact one of the lockmasters further downstream confirmed this; he said I was to fall into this section of river I’d have to go immediately to hospital to have ‘shots’. There is a noxious smell in the air that leaves an unpleasant bad taste in the back of my throat. I’m sure it’s cleaner than it may have been in the past though.

No chance of swimming…

Many bridges along the way

Still operating relics from the past

Sitting high above a railway bridge

Along the inland waterways there is also a huge problem of the introduced fish, Asian Carp. To prevent Asian Carp entering the Great Lakes there is a section which we passed through where the water is electrified. Boaters are advised not to moor or touch the water in this area. Hadn’t crossed my mind to do that… 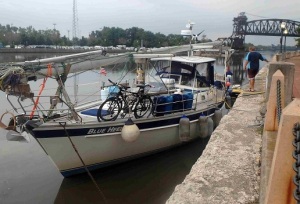 Concrete dock at Joliet – tucked in before the storm

Our first night after passing under 40 or so low bridges, we tied to a concrete wall at the town of Joliet, 39 miles from Chicago. We were the only boat there and the place was quiet as a massive storm was due that night. Following days we dropped anchor wherever there was enough depth to do so, but anchorages were few and far between.

As we travelled further away from Chicago the air smelt cleaner. The river was up a couple of feet and flowing fast enough that we maintained 7-8kn each day. In fairness, at this stage there wasn’t much ‘man-made rubbish’ as there was ‘natural rubbish’, like branches and logs. 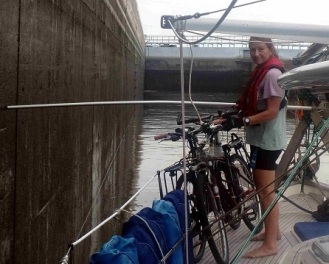 PFDs a must in these locks

Ten locks down the Illinois River

At one lock we had to wait three and a half hours until a tow of seven barges made its way upriver. Generally though we’ve not had to wait long for the locks. Although barges have priority, the lockmasters are friendly and accommodating for pleasure craft. The locks are far bigger than those in the Erie Canal as they are designed for large tows. Unlike the Erie Canal, this is still a commercial waterway. Some locks have floating bollards which we loop a line to our center cleat, while at others the lockmaster will throw us lines to hang on to.

We passed many tows coming upriver – some tugs were pushing fifteen barges; three  across by five deep, over 1200′ in length. With AIS there are no surprises though, except for huge trees and flotsam. The barges don’t produce huge waves, unlike large power boats that speed by causing troughs big enough to test the tie-downs holding our mast on deck!

To help us plan our lock entries we look up the barge traffic on the USA Corps of Engineers website. Here we can look up the tugs coming up or downstream and how many barges they are pushing. 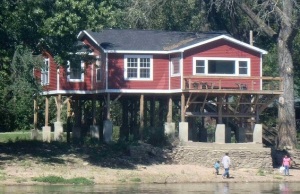 High on stilts when the floods come

About 80 miles out of Chicago the scenery improves – more trees, wildlife, less rubbish and the toxic smell replaced with the outdoorsy smell of a muddy river. Now and again we’ll pass under a relic from the industrial past – the rusty old railway lift bridges, still in use mind you. Houses perched on high stilts stand optimistically on the river banks, while caravaners camp on the lower escarpments. Apparently a couple of years ago the water levels were up 18 feet! Probably the same year the Erie Canal flooded. With little else to see along this stretch of the journey, and with the support of a strong current, we travelled up to 70 miles each day listening to the radio, avoiding logs and barges, and with intermittent internet, planned our ongoing journey.

Asian Carp, attracted to the sound of the engine, bounced around us, leaping into the sides of our hull. Some of them are huge and make a whopping sound! On the Sunday we travelled, fishermen were out in force, particularly on busy Peoria Lake. For the first time we saw a fishing boat circling stirring up dozens of fish which leapt crazily out of the water. Another bunch of blokes in a fishing boat flying a large pirate flag were out for a day of slaughtering; armed with bows and arrows. That’s right, bows and arrows! I’ve since learnt that each year in the Illinois River is the Redneck Fishing Tournament where locals (and keen internationals) can spend quality time bonding with like-minded rednecks killing as many carp as possible. Fishing poles not allowed, just bats and nets! I’m surprised they don’t allow guns or dynamite! Unusually barbaric…

If you look closely you’ll see a pair of guys with bows and arrows!

By the time we’d reached the last deep anchorage before the junction with the Mississippi, the scenery improved considerably. Sitting at anchor, birds twittering, insects buzzing in the warm still evening, fish plopping in and out of the water, while water fowl wade at the water edge. Strolling out of the forest, a skinny coyote searched for food along the banks of the river. 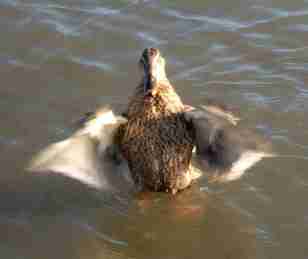 Our view from Alton Marina

Next morning we pushed through to arrive at the junction of the Illinois and Upper Mississippi passing the limestone bluffs at Grafton to reach the deeper Alton Marina 14 miles further downstream. After anchoring for the past week we spent a couple of nights at the marina to fill with diesel, replenish our supplies, ride around town for boat supplies, and clean up a bit. Having a 2m keel is a challenge as many marinas and many anchorages are too shallow for us. Adding a 50′ mast on deck makes the challenge somewhat harder, but Wayne maneuvered the boat superbly to the fuel dock then the nearby berth while hushing my unwarranted direction from the sidelines!

This marina is great. The staff here are friendly and the facilities are top-notch. They even have a swimming pool and hot-tubs! Family supermarket Schwegel’s will arrange to pick you up and drop you back to the marina, so long as you buy your groceries from them of course!

From Alton we have 200M to reach Cairo, Illinois where the Mississippi River intersects with the Ohio River to Paducah, Kentucky. At that point we’ll slow down a bit to enjoy the scenery.

Although we’ve had superb weather since the storm passed through Joliet, summer has officially finished and now it is autumn. Our companion for the next couple of hundred miles is Ol’ Man River…

Sailing the world aboard Blue Heeler
View all posts by blueheelerhr39 →
This entry was posted in 2015, USA & Great Loop and tagged Chicago, Grafton, Great Loop, Illinois, Mississippi. Bookmark the permalink.
Loading Comments...
%d bloggers like this: