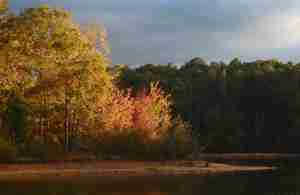 Sunset lights up the trees at Bay Springs Lake

Sunlight streams into the cabin one clock hour earlier now that daylight savings in the U.S. has ended. With UTC now at minus six hours, I’m 17 hours behind my family in Melbourne who have recently gone ahead one hour with daylight savings on Australia’s east coast.

This week we commenced our journey down the Tenn-Tom Waterway beginning at Pickwick Lake, at mile 450 from Mobile. The first section, the Divide Cut, is a 27 mile, 12′ deep, 280 feet width man-made section which joins the Tennessee and Tombigbee River basins. Pickwick Lake is 414 feet above sea level so we drop through twelve locks to return to sea level. There isn’t much to see on this straight section although the autumn leaves on the trees adds colour to the view. As winter approaches we see birds flying in formation, plenty of water fowl and eagles, we saw an otter, plus we’ve heard howling and yelping by nearby coyotes when at anchor.

At mile 419 to 411 is the scenic Bay Springs Lake where the water leeches out into small bays of the man-made reservoir. Boaters can ‘gunkhole‘ in this area to find some quiet anchorages, but must be on the lookout for ‘dead heads’ (submerged stumps of trees) waiting to foul anchors.

At mile 411 there is a Visitors Centre just north of the James Whitten Lock. We went there to read all about the area including the development and construction of the Tenn-Tom Waterway. This waterway was proposed and considered by various bodies for many years until finally in the 1970s construction began and was officially opened in 1985. The lift of 84′ is the highest on this leg and is the fourth highest lift in the U.S. (I say ‘lift’ but in fact we are going downstream now). The Tenn-Tom Waterway is the largest civil works project undertaken by the U.S. Corps of Engineers, surpassing the Panama Canal by length (5x) and lift (3.5x). At mile 217, the Tenn-Tom becomes the Black Warrior-Tombigbee Waterway for the remainder of the journey to Mobile.

Too close for comfort! 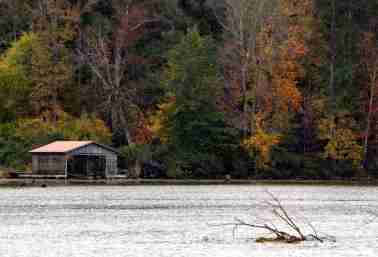 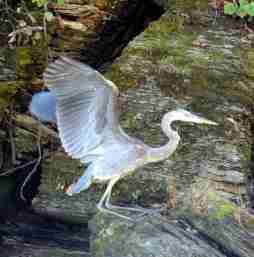 After a couple of peaceful days at scenic Bay Springs Lake, we entered the Whitten Lock. Heading south out of the lock into the straight and narrow channel a tow was approaching. Although we were advised to pass ‘on the one’ the tow was coming straight at us leaving little room for us to pass. Wayne inched Blue Heeler closer to the green starboard markers to starboard and the depth vanished quickly – 3.5m, 3m, 2.2m, 2.1m at which he immediately turned towards the stern of the tow into deeper water. Phew! 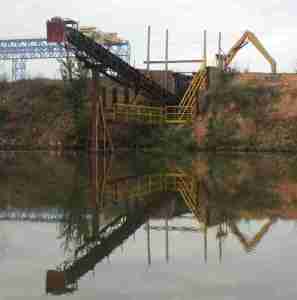 Many of the anchorages along this section are shallow or have dead-heads while access to some marinas is too shallow for us to enter. The next lock was Montgomery Lock at mile 406 (33′); then Rankin Lock at mile 398 (30′) and to end the day Fulton Lock at mile 392 (26′). Our anchorage after passing through these four locks was at a small cut at mile 390 with a less than desirable view but more importantly good holding.

The following day we and a flotilla of ‘Loopers’ passed through Wilkins Lock at mile 376 (25′), Amory Lock at mile 371 (25′) and Aberdeen Lock at mile 357 (28′). The catamaran, Sweet Sensation, was also there and we hadn’t seen them since Waterford at the beginning of the Erie Canal some four months prior!

A narrow anchorage at mile 348 had us tucked in for the evening listening to the sounds of nature – fish splashing, birds nesting for the evening, plus the loud roar of planes from the nearby Columbus Air Force Base. If you strained your ears you may have even heard the distant twang of a banjo…

Just on dusk three large dogs appeared out of the forest and went swimming. Not coyotes or wild dogs, but hunting dogs, or ‘coon dogs’. They could probably smell my pork sausages as the aroma wafted through the hatch and outside. They were back again the next morning and didn’t appear to be with anyone. 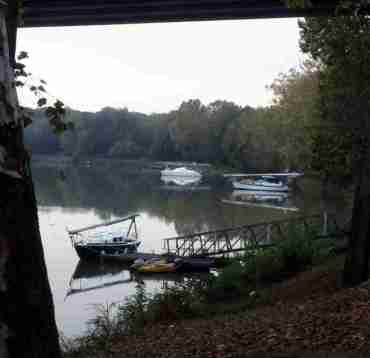 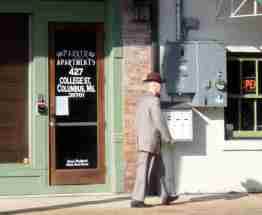 That same morning the fog was dense so we couldn’t leave early. After two coffees and two interesting podcasts we finally upped anchor and motored south through the murky river to arrive at the Stennis Lock at mile 335 by late morning. North of Stennis Lock is the Columbus Marina but we continued on and anchored in the river that meanders alongside the town of Columbus. I took a stroll through town and a visit to the Visitors Centre. A small dinghy dock makes it easier to reach the town. In the riverside park is a toilet block, trash cans, and water tap so we managed to fill up with water (stopped using our watermaker back in Pickwick Lake). That evening we enjoyed good company with the crew of Sweet Sensation. 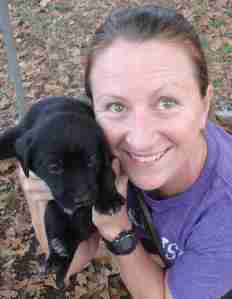 Our plan to cycle the short four kilometers to the supermarket was thwarted by forecast heavy rains and thunderstorms. Near our anchorage a man began waving at us and called me over. Art was his name and he asked us if he could help by taking us shopping. Hell yeah! (The best part was his neighbour had seven three-week old coon-dog puppies that I cuddled!).

With a howling coon dog named ‘Si’ in the back of his pickup, Art drove Wayne and myself to Krugers Supermarket and we came back with bulging bags of fresh veggies, fruit, meat and dairy. We couldn’t thank him enough for his kindness, and by 9am we were back on board fully loaded with food and water just in time for the heavy rain. With more thunderstorms and heavy rain keeping us boat-bound, we’ll stay around Columbus for a couple more days until the sun shines.

Sailing the world aboard Blue Heeler
View all posts by blueheelerhr39 →
This entry was posted in 2015, USA & Great Loop and tagged Great Loop, Mississippi, Tenn-Tom. Bookmark the permalink.