Sunny days abound, but they’ve been mostly cold. Prepping Blue Heeler for blue water sailing, Wayne finished a few small electrical and plumbing jobs and prepped the deck for the mast while I sat in the sunshine cleaning all the turnbuckles from the rigging. Although fresh water is great if the water is clean and fresh, the muddy waters of the rivers left a grotty look to our teak but it looks lovely now after a good clean.

Thanksgiving at Turner Marine was a simple affair. At lunchtime the owners provided a couple of cooked turkeys while the boaters each brought ‘a plate’. Flying the flag for Australia I chose a risky option of providing a couple of plate-loads of Vegemite sandwiches! Cheese and Vegemite on one plate; Avocado and Vegemite on the other, complete with little Aussie flags! To make the experience more enjoyable I even cut the crusts off! Now, in Australia I’d have been booed from the party for providing such simple fare to an event, but before long plates with little Aussie flags could be seen dotted around the place. Reviews were mixed…

Kurt and Wayne enjoying a cold one after stepping the mast

The week after Thanksgiving we had out mast stepped, a couple of days earlier than scheduled. There were four guys helping Wayne and I, plus Kurt from Isabella II was there to lend a helpful hand too. The job was so much easier than just the two of us doing it. Within one hour the mast was stepped and the rigging in place with only the final tweaking to do. Back at the dock we fitted the boom, vang, sails, running rigging and checking everything.

But our hopes of departing that week were dashed as we discovered a few things that need replacing and fixing; work that can’t wait until Trinidad. 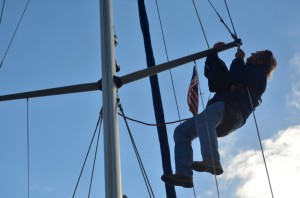 So what’s around here? Not much. We’re about 18kms from the centre of Mobile so to get further afield you really need a car. Every few of days though, I’d get on my bike and ride 4kms up route 163 to Food Champs to fill my panniers with fresh supplies. In the other direction I would ride along the highways on flat roads about 12kms to Theodore. There are no others on bikes or pedestrians for that matter. Getting around by car seems to be the only way, but that’s not surprising since the cheapest fuel price is $1.79/gallon (around US$.47/litre). There are no bike racks to lock to so I usually try and find something to lock my bike to. Outside Lowes Hardware I locked my bike to a childs swing-set; at Walmart I locked it to a shopping cart, figuring they’ll have to steal the swing-set or cart to steal my bike. A couple of times I went along with Traci and Kurt from Isabella II in the marina’s courtesy car to stock up or get some propane which was very helpful.

You may recall back in Namibia another yacht dragged and crashed into ours smashing into our outboard motor which was locked on the railings. One of the transom clamps bent severely at the time and now the other’s handle has finally snapped off so we had to order new ones to replace them. Also the new Olympus camera which I bought in New York bit the dust, so I’ve sent that off under warranty and I’m waiting for that to return. It’s also given me time to clean out lockers, and wash away that musty smell from our summer clothes which are now back on the shelves fresh and ready to be worn on some exotic Caribbean island!

How long are we staying in the U.S.? Well, back in October we applied to have our stay in the U.S. extended. I could write a book on the irregularities of the application process, but I won’t fill up this post with the galling details. Suffice to say that our application was received by U.S. Immigration mid October and we’ve been advised that with up to a three month processing time, our case won’t be reviewed until mid January. That means we can stay in the U.S. until it’s processed, although we don’t plan on staying that long anyway. If you’re a foreign boat planning this route, you will need to think about extending your stay. Contact me directly if you want to know more about our experience.

Soon we’ll head east to Florida then into the Caribbean. It’s been far too long between sails and Blue Heeler is not a boat that likes sitting in a marina. Until next time.

Sailing the world aboard Blue Heeler
View all posts by blueheelerhr39 →
Aside | This entry was posted in 2015, USA & Great Loop and tagged Alabama, Mobile, rigging. Bookmark the permalink.
%d bloggers like this: