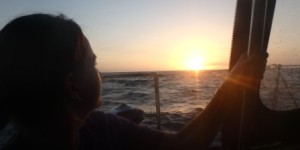 The last week of 2015 was spent motoring along the shallows of the GIWW and overnighting to Key West in the Florida Keys. After a couple of days finalising our stay in the USA, on a clear day with 15knot easterly winds we sailed away from the land of the free.

With 100nm to Cuba’s Marina Hemingway, a Port of Entry, we sailed on a rhumb line of 200deg. ‘Sweet Sensation’ sailed nearby, often within 1nm from us. The strong flow of the Gulf Stream, which flows west from the Gulf of Mexico to the Atlantic to our east at around 3kn, altered our heading to 225deg but still our course over ground was 200deg.

At midnight in the middle of the Gulf Stream I was on watch. Over the VHF came distant “Happy New Years” from the darkness. Same time last year we were sailing south along the east coast of South Africa, also fighting a strong current. Wayne woke up at 1am and we kissed and hugged each other thankful for another fulfilling year and with hopes of another good one. I went to bed and rose again at 4am.

Friday 1st January in the final hours of the trip the wind and current eased and we motor sailed across the Tropic of Cancer into Marina Hemingway. With no wind the entry into Marina Hemingway was quite straightforward, although on both sides of the channel is disastrously shallow coral banks – sailors are advised not to enter if there is a strong northerly wind as large waves break through the channel. Immediately behind Sweet Sensation, we turned at marker number nine where officials were waiting for us. The officials helped us to tie up then went about their business clearing us in.

First we had the Guarda Frontera board our boat. He sealed our Satphone and said we weren’t allowed to use it, then a trip to the Customs and Immigration office where we each had our photo taken. Next came the Medical Officer who spoke reasonable English. He filled out a couple of forms and was quite pleasant. Within half an hour or so we were sorted and told to motor around to canal number one where we would be greeted by the Harbour Master, José. José and another guy sorted out our electricity, water and were very friendly. The Marina is unusual as there are four canals which boats tie alongside, not berths like other marinas. I think I like this as it’s easier to get off and you can stroll along and chat to other yachties.

Once tied up we were visited by a rep from the Ministry of Agriculture and his sidekick. They were friendly, spoke a little English, and completed the statutory forms for El Capitan to sign. They asked me what food I had on board – I told him I had pork, cheese, apples, potatoes, onions, a dodgy cabbage and some stringy carrots. I had no eggs except for a boiled one we were planning on having with lunch. They didn’t want to see anything, but were eyeing off the juicy apples hanging in the net. After a while the older guy asked us if we’d like to help his family and give a gift. He hinted at money upon which I said “Sorry, we don’t give money”. Stalemate. I offered him a packet of ground coffee, which I thought he’d jump at the proposal, but no. He then said “Well, perhaps some tuna”. I thought “Why not?” So I ‘fished’ out a promo pack of four tins of Albacore tuna and handed them to him. He seemed pretty pleased. Nodding towards the apples in the net he then said “Perhaps you grab and apple, cut it in four and we can all enjoy a piece”. Fresh crisp USA apples would be hard to get in Cuba so I invited them to have one each. “No, just one in quarters”. So I cut one up and we each shared a quarter, leaving me one red apple and six green tart Granny Smiths.

That evening we dropped in on Sweet Sensation for a few drinks and to celebrate a belated New Year. The next day I was keen to go exploring to find a casa de cambio to get some local money, although Wayne was feeling a little less enthusiastic after a big night welcoming in the New Year! Saturday the 2nd of January was a public holiday, but after riding our bikes around, asking directions in Spanish we managed to find a Cadeca casa de cambio for local dinero. Bueno!

On our third day Wayne and I decided to visit La Habana. To say that old cars are ubiquitous to Cuba is an understatement. I imagined there would be a few, particularly in Havana, but they truly are everywhere. Out of the Marina Hemingway is 5th Avenida. Holding out your fingers you can hail one of the old cars, called maquinas, and pay 10 pesos to nearby Playa, jump out and grab another for 20 pesos (total about US$1.20) to take you to La Habana.

Havana is incredible – crumbling buildings, brightly painted cars, touts in the tourist places inviting you to buy Cuban cigars. Old Havana, with its 500 year old castles, cathedrals and edifices is a photographers paradise. We stopped at a small café for a sandwich lunch then walked around for hours. 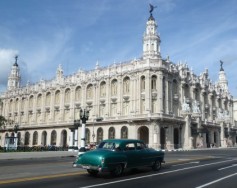 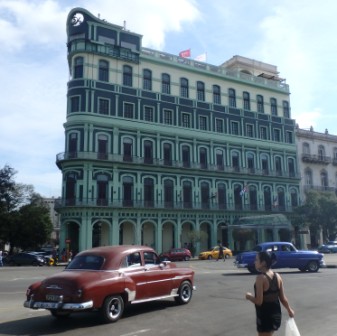 Our return trip from Habana to Playa was fine and cost 20 pesos. From Playa back to the Marina, the driver tried to pull a swifty on me. Although I’d cleared the 10 pesos price with him before hopping in, he then asked for CUC$10 for the trip. That’s like asking US$10.00 for a $0.40 trip. He was speaking very fast Spanish at me and waving his hands. I retorted with broken Spanish, English and a dash of French and told him he would get what we agreed and no more! I paid him with a 50 peso note (a little more than we agreed cause it was all I had), then we alighted the maquina. He was still cursing me as he drove off. Just wait until Uber gets to Cuba fella!

With a thirty day tourist visa ticking away, within a few days we’ll begin our trip anti-clockwise around Cuba. The bureaucracy here is firm and we have no freedom to anchor anywhere we like around the island. We must stop at designated marinas along the way and if anchored anywhere without a marina we must not go ashore. But if the officials are as friendly as the ones we had on arrival we should have no trouble. 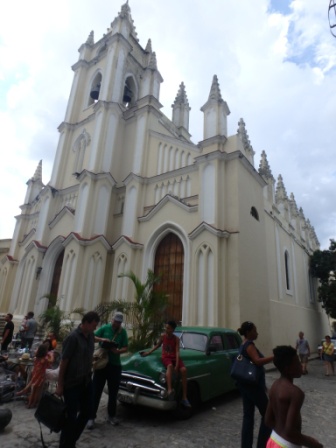 Sailing the world aboard Blue Heeler
View all posts by blueheelerhr39 →
This entry was posted in 2015, 2016, Cuba and tagged Cuba. Bookmark the permalink.