Reunion in the Virgins 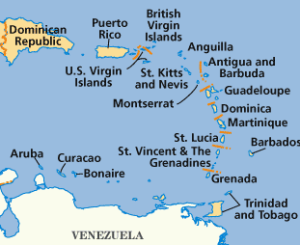 Back in 2012 when we joined the Indonesia Rally from Darwin to Kupang, we also met many good people and made many friends. From South Africa, some slowed down the pace and stayed in the Caribbean or flew to homes around the globe, while last year we motored around the U.S. Now that we’re heading east, many cruisers are heading north on their way to Europe or other places.

At the pleasant anchorage at Dewey, Culebra in the Spanish Virgins we met again the crew of Kastehelmi who we hadn’t seen since South Africa over a year ago. Over the weekend we grabbed a mooring at the gorgeous small island of Culebrita which lies to the east of Culebra. Karl and Elisabet from Spray joined us and we walked to the ‘jacuzzi’ pool at the end of the north eastern beach.

In the evening all of us played a Finnish game on the beach, knocking down numbered blocks with the winner the one who reaches 50 points first. Of course the Finnish came first! With a cooling problem with our transmission tucked away out of mind (sort of) for a couple of days we stayed on the mooring and enjoyed some relaxing swimming, beach walking, and snorkeling. Finally!

Wayne, Elisabet, Karl and Ally at the Jacuzzi, Culebrita 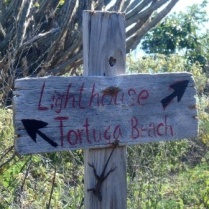 The boys light up… 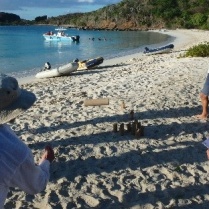 But of course there’s a price we pay for a few days of bliss. Besides our transmission cooling system out of action, we’ve sprung a leak from our fresh water pump. Wayne opened up the engine room and saw the engine bilge flooded with coolant. Although an excellent place to swim and relax, Culebrita is not the place to dismantle the engine! Wayne decided it was too risky to attempt to fix the problem out here and would keep the fluid up until we reached Charlotte Amelie on St Thomas in the USVIs.

From Culebrita it was a short 20nm to reach the US Virgin Island of St Thomas and the main centre of Charlotte Amelie. The following morning we got up early and both went on a Safari bus to Advanced Auto Parts where Wayne bought Bar’s Leaks for Head Gaskets. He wasn’t sure if it would fix the problem but he at least had to try. Again, this is not the place nor the time to rip apart the engine. Back at the boat I left Wayne to put the magic stuff in the cooling system while I went ashore and walked around the town of Charlotte Amelie, and to the Pueblo Supermarket which is about 2kms from the dinghy wall near the cruise ships. It’s a great supermarket for provisioning.

Speaking of cruise ships, each day two, perhaps three cruise ships spew hundreds of tourists onto the streets of St Thomas. The main touristy section of Charlotte Amelie has dozens of fancy stores selling jewellery, diamonds and other duty free stuff. I have enough diamonds so I didn’t buy anything!

The next day we decided to let the engine problems rest and give Wayne a break from worrying about the work he’ll need to do soon. We found a Jamaican place to have lunch; strolled around the historical area and topped it off with an creamy cold ice cream. Our next stop would be Jost Van Dyke in the British Virgins so we decided to clear-out at Charlotte Amelie and head there the next morning. This would mean we wouldn’t have to stop at Cruz Bay at St John to clear out of the USVIs.

Nice to relax while we can

Within one hour of us arriving at Great Bay at Jost Van Dyke our friends Brian and Chris from Coruisk grabbed a mooring next to us. We haven’t seen them for almost a year! During the afternoon Wayne and I laid on the deck watching the charter boats scrambling to grab moorings before they ran out. Fists gripped around boat hooks, shouts, racing towards moorings, plus some potential anchoring disasters from a variety of captains and crew kept us entertained for a couple of hours in this very busy bay. Once the mooring balls were all filled up the laggards missed out and had to anchor way out of the bay. Later that evening we enjoyed a meal at the famous Foxy’s beachside bar with Brian, Chris and a hundred other people!

Great Bay at Jost Van Dyke is really beautiful though. A deep anchorage with many boats, but nonetheless it really is postcard pretty.

About 20 minutes walk away over the ridge is White Bay. Again beautiful white sand, lots of charter boats and huge yachts, and many people. Wayne and I walked there and went for a swim and also watched the punters in their chartered vessels ferry themselves to shore in large dinghies. On the way back to our boat we met up with Swen and Katrin from Solar Planet – again we haven’t seen them since South Africa! The year has really flown by and it’s nice to meet up again with familiar faces.

So the past couple of weeks we’ve had ups and downs (I think more ‘ups’ thankfully). Unfortunately with our engine trouble we need to leave the BVIs sooner than we wanted to reach St Maarten where Wayne will fix the problems. I fly to Melbourne at the end of March so I’ll be around to help him before I leave (help him… I mean, pass him tools and make him cool drinks!). By Tuesday next week a strong low is passing to the north of us bringing with it some strong north-easterly winds – a much needed break from the easterly winds. This wind angle should be ideal for us to sail to St Maarten and minimise engine use. Let’s hope!

It’s only 80nm from the BVIs to St Maarten… 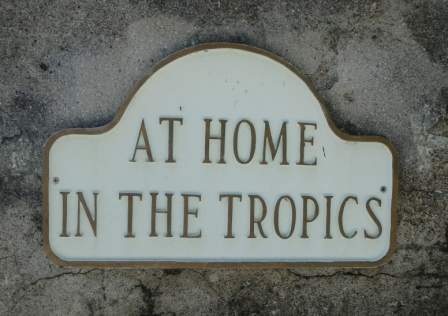