Portsmouth is a small town at the northwest corner of the lush volcanic island of Dominica at the end of the Leeward Islands. The wide and easily accessible Prince Rupert Harbour has many moorings available managed by the ‘boat boys’ of the Portsmouth Authority for Yacht Security (aka P.A.Y.S). These guys can arrange fuel, water, garbage pickup as well as local tours. We elected to drop anchor in the weedy gritty bottom where it miraculously hooked first go (took us four attempts last year). A swim to shore disclosed a number of large concrete mooring blocks lacking the important mooring lines, laying in wait to snag unsuspecting anchors; reminiscent of Ao Chalong Harbour in Thailand. 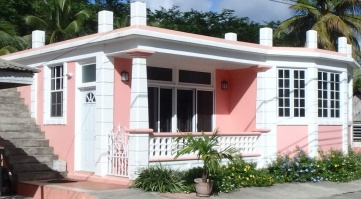 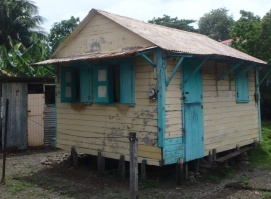 In the small town, the galvanized iron and breeze block houses and buildings are simple to say the least, but every so often a brightly painted home with a grand display of blooms and trimmed tropical bushes appears like a rose between thorns. The streets are clear of rubbish; littering seems to be a major offence here judging by the many warning signs reminding litterers a stint of one month imprisonment or a EC$5000 fine should they deviate from the law. At the southern end of town is the Customs office. A couple of forms and EC$10 later we were cleared into Dominica. Dominica allows stays up to two weeks without the need to return to clear out. Very convenient!

Stores selling basic items open for the morning, generally closing during the middle of the day to reopen at 4pm. We stopped for a drink at Sandy’s Beach Restaurant and to surf the net and check emails. An alternative venue is the Purple Turtle Bar a little further up the beach. This particular occasion our visit was interrupted by a couple of local guys fighting outside. From what we could ascertain, one guy had taken “stuff” from another and he wanted it back. What that stuff was we’ll never know, but after a few high punches and head-locks, the scrap got decidedly ugly when one of them picked up a machete. 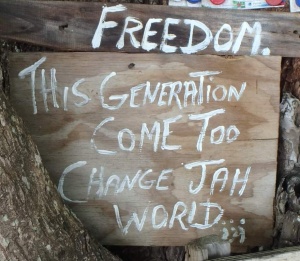 Waving the machete around and feigning slicing the other guy’s head off scared some of the patrons; one woman visibly shaken by the experience. We heard a ‘whack’ then a gasp from onlookers as the machete struck the hapless victim; luckily for him the flat side of the blade was used, not the sharp edge. The nervous victim backed up into the restaurant bringing the fight closer to us. I was closest to him and rather than finding myself as a prime witness to a slaughter, I quickly grabbed my bag and stepped to the back of the bar. Standing with his black arm raised clutching the machete, the aggressor warned “You ‘ave one hour to return me stuff, ONE HOUR” and with that he turned and walked his bare black feet up the black sandy beach gripping the machete. Not saying a word but obviously seriously considering his next move, the other guy ran off. For his sake I hope it was to return the stuff! 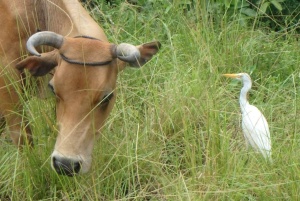 Over the years I’ve managed to hoard some ‘stuff’ of my own during our travels; a pair of hardly worn men’s sailing shoes and a pair of runners; some household items I no longer use; a few clothes; exercise pads, pens, pencils, pastels and some children’s toys, books and trinkets collected along the way, plus an assortment of toiletries I bought in St Maarten such as soaps, toothpaste and brushes, and female products. Dominica was hit by Hurricane Erika in August 2015 and much of the damage was caused by major flooding. I handed over the items to one of the guys from P.A.Y.S. for distribution – they said the goods were much appreciated and assured me the stuff would get to those who may need it. 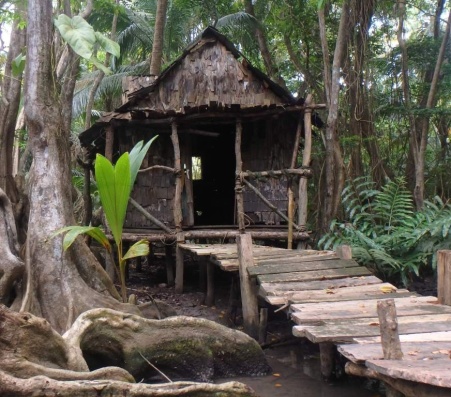 While waiting for our next weather window to head south, we took a touristy trip up the Indian River – one of the ‘must do’ tours in Dominica. Our guide, James (aka Mr Bond) rowed us up the shallow river talking all the way about the trees, birds, local history and about the movie Pirates of the Caribbean II which was partly filmed here. (He told us that he was the one who rowed Johnny Depp, Orlando Bloom and Kiera Knightley up the river). 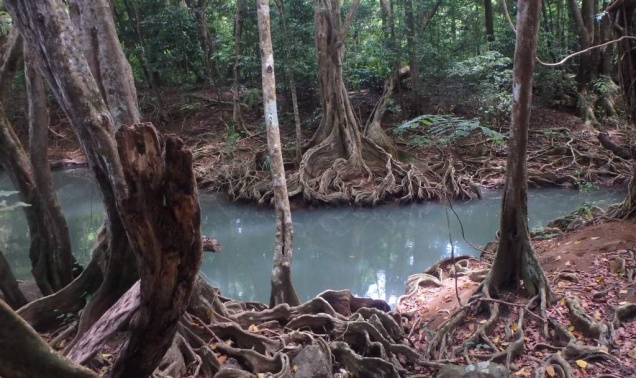 After an hour or so passing a replica hut from a scene in the movie, admiring the spooky twisted mangrove roots, and laughing at Mr Bond’s droll humor as he recited quotes from James Bond 007 films (eg. licensed to row!) we reached a small bar where Wayne had a ‘Dynamite Punch’ of rum with a dash of fruit juice, while I had a refreshing passionfruit juice. The trip only cost EC$50 each plus US$5 for park entry, and it was worth it for the scenery alone. Now I’ll have to watch that movie to see if I can recognise the place.

The Saturday morning market in Portsmouth is the place to go and stock up on veggies – cucumbers, water melons, peppers, tomatoes, lettuces, bananas and pineapples, but I didn’t find any onions that day. At the Cabrits National Park one Sunday the locals hosted the annual Jazz and Creole festival but the same evening was the P.A.YS weekly BBQ which we attended instead for a big plate of fish, chicken, rice and salad and all the rum punch you can drink!

The next day we motored south to the capital, Roseau, grabbing a mooring from local boat boy SeaCat about 1nm south of town. It’s the low season and cruise ships have stopped for the season, so it’s slim pickings for tourist operators, souvenir vendors, taxi drivers and beggars with an obvious lack of tourists to buoy up the local economy. We walked through town greeting most with a “Good morning” while also politely fending off people wanting to either take us for a taxi ride, a tourist trip, or to give them some money. Tourism can be quite a cruel industry in the off season.

Our next stop is the French island of Martinique where we begin our trip along the windward islands of the Lesser Antilles.

Sailing the world aboard Blue Heeler
View all posts by blueheelerhr39 →
This entry was posted in 2016, Leeward Islands and tagged Caribbean, Dominica, Leeward Islands, Lesser Antilles. Bookmark the permalink.

1 Response to Down in Dominica