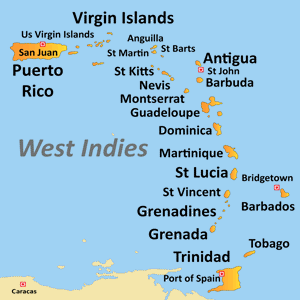 Beyond the Leeward Islands, at the southern end of the Lesser Antilles are the Windward Islands. These include Martinique, St Lucia, St Vincent and Grenadines, Cariacou and Grenada, and to the east Barbados. Ships from Europe generally arrived in the region to the south of Dominica; hence the islands to the north were on the leeward side, and those to the south to windward. Trinidad and Tobago, our destination, is not included in the Caribbean islands and is geographically part of South America – literally a stone’s throw from the economic turmoil of Venezuela.

From Domenica, the first stop along the Windward Islands is the French island of Martinique. Apart from the French keyboard testing my QWERTY touch typing skills, checking into the French Islands is straightforward, usually at a convenience store or tourist centre and for usually a few of Euro only.

The sail from Roseau in Dominica to St Pierre in Martinique was lively. The southern end of Dominica created gusts (on this day up to 35 knots), ultimately settling to steady trade winds between islands. To lessen the impact of wind bullets roaring down the steep island we put a reef or two in the sails. For the remainder of the open 28nm voyage, seas and wind steadied to around 2m and 25knots respectively, easing further once under the wind shadow of northern Martinique.

The anchorage at St Pierre is a narrow section along the shoreline with a deep drop-off not far from shore. North of the main dock we managed to anchor in 12m. A small tourist office sits high on the hill above the massive stone wall. Here is a computer terminal for checking in, plus a small pot for small donations. Along the narrow streets, St Pierre has the usual patisseries and boulangeries (plus a place selling coffins!). Many of the stores were closed and we can only assume because it’s no longer high season.

St Pierre used to be the capital of Martinique (now Fort de France) until Mont Pelée erupted back in 1902 pretty much wiping out the town and 30,000 inhabitants in minutes. Apparently one of the three survivors was a prisoner who, fortunately, was holed up in solitary confinement. I wonder who found him? I’m surprised the pyroclastic flow didn’t cook him like a pizza oven!

The following day we had a lovely sail south 15nm to beautiful Anse D’Arlets at the south western end of Martinique. Sitting back enjoying the sailing on this beautiful day, my eyes noticed a spume of water in the distance followed by a large spray. It could only be a whale! The sperm whale, longer than out boat, seemed to be sun baking as we sailed close by.

Grande Anse has many moorings which we believe are free to use, but also plenty of anchoring ground in this wide bay. As soon as we hooked a mooring, we both jumped into the clear water to cool off and to double check the mooring block and tackle were in good order, which they appeared to be. A gorgeous place to stay a few days! 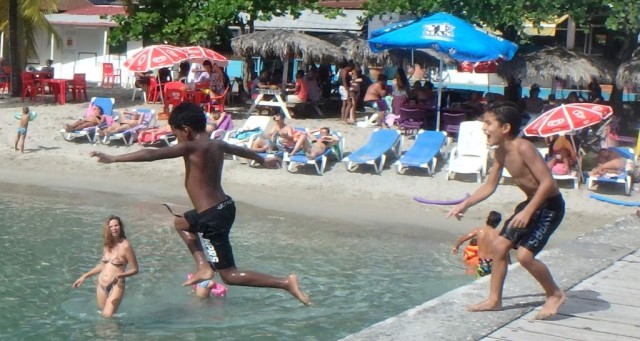 Moorings available to yachts stops anchors destroying the sea floor and promotes growth of sea grass, which in turn attracts sea life to the area, so that’s a good thing. There’s plenty of turtles here. But without regular inspection moorings can be dangerous to the unsuspecting yachtie. After an early morning swim, then a coffee in the cockpit watching turtles swim by, I noticed a boat on the outer edge of the bay dragging his mooring. Quickly Wayne tried to raise him on the VHF but no response. He then made an “all ships” announcement to anyone who could go over the the vessel in a dinghy to help, as ours was still strapped on deck. No response from any of the fifty boats in the harbour. (Many boats particularly on moorings tend to have their VHFs off and no anchor alarm on. Plus the fact, many of the boats don’t speak Australian!). As we quickly assembled and launched our dinghy, the sleepy skipper in the runaway sloop popped up on deck and realised he was almost on the rocks at the northern end of the bay! He quickly had his vessel reversing away from the rocks still with the mooring ball attached to his bow cleat! We resumed drinking our coffees as the lucky sailor motored away to another location. 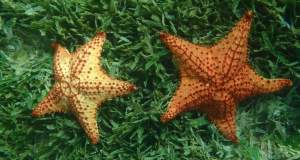 Although our mooring appeared to be fine, the northern area of the bay was in fact quite rolly. We decided to disconnect from the mooring preferring to anchor in closer to the action in a designated anchoring spot. Careful not to cause more damage than necessary, we dropped the pick on a sandy patch. From here was a good swim to the beach in the clear water and back to the boat for some much needed exercise. Beneath in the sea grass swim large turtles, sea snakes, but not many fish. Lots of huge starfish too. 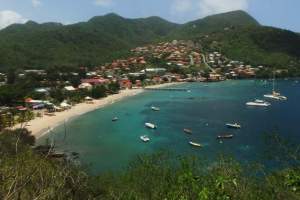 At the casual beachside venue Ti Payot we stopped for a drink and to use the WIFI. We had thought of grabbing a bite too. By 6pm though, the kitchen closed, chairs and tables were stacked and the lights switched off. The bartender locked up he said “Bonne nuit” and left us sitting there in the dark with a handful of others to finish our drinks and our Googling! 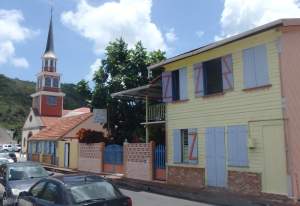 To the south is Petit Anse, about 2kms walk along the road. It’s a cute place and a pleasant walk to get there, but not much happening. There is a trail across Morne Champagne that links Petit Anse and Grande Anse. The walk starts a little steep then is easy enough on a narrow rocky path. It takes around 45 minutes with stunning views peeking behind tall bushes.

Clearing in or out of Martinique can’t be done at Grande Anse. At Petit Anse’s Cyber Base, which is just south of the dock on the land side of the road, you can use the online clearance system for €1 and get internet for €3 for one hour. It’s an easy walk from Grande Anse anyway.

The great thing about the Leeward and Windward Islands; they are close enough for day sailing, about 25nm apart. We waited a few days until the wind shifted easterly and eased slightly before our next sail some 26nm so St Lucia. The day sail to Rodney Bay at St Lucia couldn’t have been better. Beam reach, 15knots, blue skies, full sails and even current with us for a while too – dare I say, perfect!

Arriving about 300m offshore from fancy resorts, white sand and sunburnt punters glowing from under beach umbrellas, we dropped anchor in 5m of water. I couldn’t see the bottom as I could in Martinique. 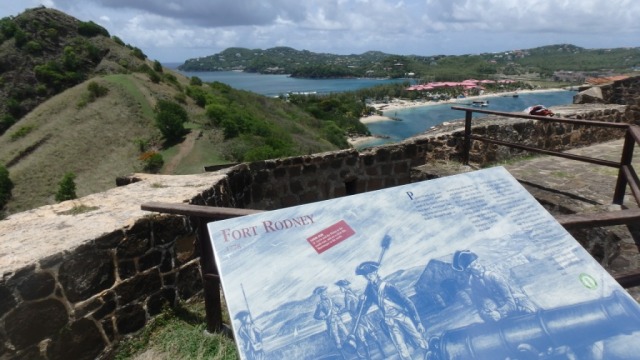 Pigeon Island is to the north of the bay and is US$7 park entry to visit the ruins of Fort Rodney for spectacular views of St Lucia and a decent afternoon activity. There’s a dock to park the dinghy where it’s a short walk to the payment counter. In the park is a restaurant where we joined Brian (Coruisk) for a meal. Besides the three of us, only one other table of guests were there that night. Strange as it was a Friday night, but once again it’s no longer high season. The restaurant had a jazz duo playing some great sax and we enjoyed them nonetheless. 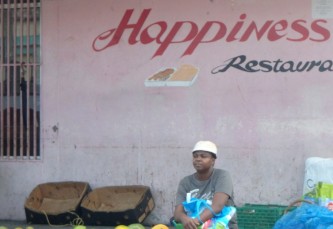 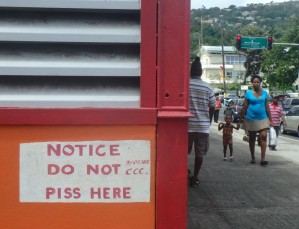 Another day we caught a minibus to the capital of St Lucia. Castries is a typical Caribbean city – large central market selling cucumbers, mangoes, tomatoes, melons plus other stalls selling souvenirs from the region. Like many small Caribbean towns there are places where the locals shop and where the locals want the tourists to shop. The cruise ship dock has a shopping area selling diamonds (of course!), perfume and other duty free items, while along the back streets you can buy inexpensive chicken roti and a rum punch.

On our way sailing south we slowed down to admire the impressive Pitons which point into the sky some 750m or so from the sea. A couple of boat boys zoomed towards us and greeted us with a “Welcome to paradise!”. We’d already decided to sail overnight so we waved them away and continued our voyage south along the island chain.

Hanging out on the pick on a sunny afternoon at Martinique

Sailing the world aboard Blue Heeler
View all posts by blueheelerhr39 →
This entry was posted in 2016, Windward Islands and tagged Martinique, Sperm Whale, St Lucia, Windward Islands. Bookmark the permalink.
Loading Comments...
%d bloggers like this: