A taste of Trinidad

Heading into our third (and final) month in Trinidad, I’m pleased with the progress we’ve made. In the heat and humidity, we’ve worked almost every day, seven days a week for the past 11 weeks (the cool evenings compliments of the rental airconditioner, is one of life’s little luxuries…). Yesterday, the final painting was completed on the hull – transforming our formerly shameful underneath to a smooth and curvaceous bottom – watch out Kim Kardashian!

Now that is a nice bottom!

All the ‘mod cons’ of a galley!

After a big day’s work, at the end of every day we usually eat on board – curries, pizza, nachos, salads, stir-fry, whatever I can be bothered to whip up. Of course, I have all the mod-cons (potato peeler, pressure cooker, etc) and the nearby supermarkets have all the groceries I need, so staying in is easier than going out; plus we can save our money for more important things, such as A$350 for 200ml of Propspeed!

One day though, we managed to get away from Power Boats for the ‘Taste of Trinidad’ tour, run by Jesse James of Member’s Only Maxi Taxis. In a maxi taxi, we joined eight other yachties on a fun tour around the island stopping at local food huts and stalls along the way to sample some of Trinidad’s delicious gastronomy.

We tasted soursop, goat curry, barbecued pig tails, cow heel soup, fry bake, saltfish, chicken livers, a slimy plum fruit, plus heaps of other tasty and dubious dishes and fruits. Jesse even drove us across the island to see the eastern shore and the Atlantic and to stop – for lunch!

I must say though after relentless sampling from 9am until 7pm my stomach was packed to the gunwales; At the end of the evening when Jesse stopped the van outside yet another food outlet, I thought I heard him whisper ‘just one wafer thin mint’… but it turned out we stopped for a yummy homemade ice-cream. It was a fun and filling day out! 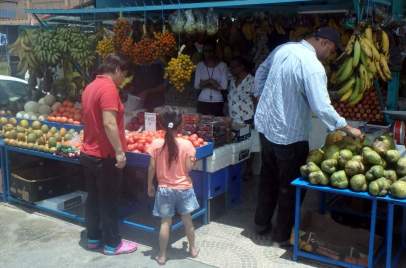 Doubles from this lady 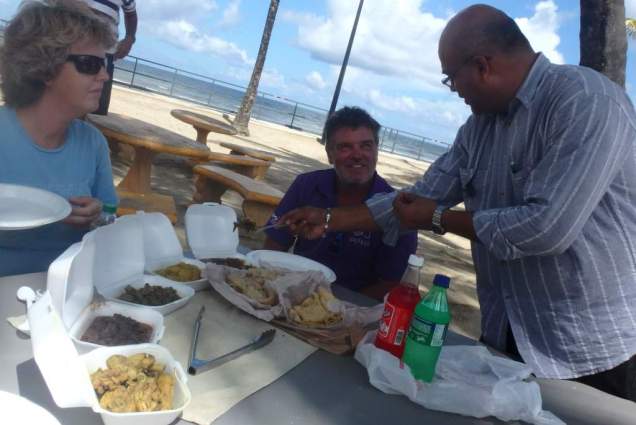 Back aboard, Wayne fitted a new Raymarine CPT-120 transducer which should give us higher resolution, photo-like, sonar images on our Raymarine MFD. Drilling a hole through the hull is always a little scary, but a tube of black 3M 4200 sealant filled any gaps to keep the sea-water out. This will be out main depth sounder while the original one will be used as a backup.

The transducer came complete with a 10m length of cable with plug at the end to plug straight into the MFD. Blue Heeler is only 12m long so a 10m cable should reach from the head to the cockpit, right? Of course the best route is usually the most direct (ie: a straight line), but as the cable path on our port side is usually easier, albeit a little longer, we fed the cable back then forward then reach over to the chart plotter at our starboard cockpit.

This cabling job didn’t take long at all as we’ve worked cables on the port side of the boat before. But a problem. After feeding the cable into tiny gaps and tunnels, once it had reached the cockpit the cable was 30cm too short! Hmm…

Back to the beginning – identify the most direct route between A and B. Could we really put a cable on the starboard side of Blue Heeler where no cable has ventured before? Do we go under the floor; behind the lounge; inside the bilge; overhead? With our combined troubleshooting minds we would solve this puzzle. 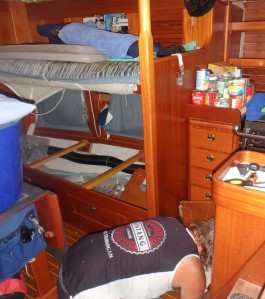 Wayne grabbed his hole drill; I emptied all the cupboards from one side of the boat to the other; we removed panels, lifted hatches, closed hatches; moved stuff aft, then forward, stepping over each other as we went. Only when we agreed on the cabling route did we remove it from the port side. All the stuff I’d moved had to be removed to the other side of the boat! Finally after a few hours we did it!

The cable pioneered it’s way from the head into a forward locker; the wet weather cupboard; behind the kitchen gizmo cupboard; behind our ‘library’; behind my canned peas, corn, and coconut milk powder (Oh, there’s my missing potato masher!); diverting sideways into the plastic container cupboard; moving upwards past the cordial bottles; into the cockpit panel; then hey presto, into the back of the chart plotter – with not one centimetre of spare cable! Phew! The alternative was to buy a 4m length of cable from nearby Goodwood electronics. Not only would an extra 4m of cable potentially deteriorate the signal, it would have been too easy for us!

Hooray! Getting closer to Vitamin Sea!

So the big jobs are done and the cleanup commences. Wiping, washing, polishing, greasing nipples; emptying cupboards and wiping down everything with vinegar to prevent mould. Our indulgences these days are electricity, water and showers, so we’ll stay a few more days on the hard making good use of these conveniences.

While Trinidadians look forward to their Independence Day holiday on Wednesday (Happy 54th Birthday Trinidad!), we look forward to an imminent launch for a dose of vitamin sea!

Sailing the world aboard Blue Heeler
View all posts by blueheelerhr39 →
This entry was posted in 2016, Trinidad and tagged Caribbean. Bookmark the permalink.
Loading Comments...
%d bloggers like this: