Early October we made the move to Tobago from the main island of Trinidad; of course with prevailing easterly winds we knew we’d have to motor-sail to get there. While Wayne stayed aboard Blue Heeler monitoring the closeness of anchored yachts in the crazy currents at Chaguaramas, I took our papers and cleared out with Customs and Immigration. Although we were only travelling to Tobago, the same country, it’s a requirement to check in and out of every port, for security reasons we’re told. From Immigration I was handed a stapled sealed arrival form which I was to hand in at Charlotteville, while Customs slugged us another TT$50 for navigation fees for the month of October. Before returning to Blue Heeler, I stocked up on groceries, some Stag beer and a couple of ice-creams which would melt before I returned to the boat.

By midday we’d raised the anchor, pleased to be away from this filthy anchorage, and headed around to the shelter of Scotland Bay to wait a few hours until a decent time to depart. Disappointingly the banks in this small bay are littered with rubbish; makeshift tents from plastic tarps strung in the mangroves. Although the water didn’t have a film of oil on it, like the main port, the colour is a shade of dark tea due to the outflow of South American rivers. We went for a much needed swim and managed to stay clear of a collection of plastic bottles, polystyrene containers and a dead fish swirling in the current. At 5pm we departed on our 80nm trip to Charlotteville located at the north east corner of the small island of Tobago. This would give us an ETA of around 11am.

The light wind blew gently from the SSE and we motored along the north coast of Trinidad until the wind shifted slightly to the south. We then decided to make our crossing to Tobago. Between the two islands is a northwesterly flowing current which runs at around two knots. As Blue Heeler crabbed its way across the equatorial current, the wind tricked us and shifted easterly. Now our course over ground was 10 degrees and our heading was 90degrees as we fought the current! Despite being further north than we liked, by sunrise we’d managed to break away from the current and our COG agreed with our heading. We reached Charlotteville by 11am as planned and had lunch before checking in. There is a rule here in Trinidad & Tobago (clearly printed on the Customs office wall) that overtime will be charged based on the time you arrive in T&T waters, not when you arrive at their office. This is quite unusual and a few cruisers have been caught out. I believe the fee is around US$50 or more, but this is only for entering or leaving the country and not for inter-island travel. The customs guy was very friendly as was the Immigration lady, and we checked in with no hassles.

Doesn’t get much better than this!

Charlotteville was recommended to us by Neil and Ley from Aussie yacht Crystal Blues and they were spot-on. Man-o-War Bay at Charlotteville is my favourite Caribbean bay so far, but of course I’ve not visited all of them! Charlotteville is for cruisers seeking a quiet anchorage, clean swimming, white beach, water from either the main dock or a fresh spring at the beach, low-key fishing village with a few watering holes and eateries, a simple grocery shop and a weekly veggie market.

You won’t find cruiser radio nets, organised shopping trips or hairdressers here. As far as I know crime is not a problem here, unlike the islands to the north. Of the 30 or so boats here I think the majority are French, followed by German, South African, USA, British, and one other Aussie boat besides us.

A typical day? I try and start with some yoga moves before the sun pops up; breakfast and coffee; a bit of housekeeping and food preparation for dinner; a 20 minute swim to and from the beach; perhaps a walk to the Fort Cambleton lookout overlooking the bay, or a walk from the town to Pirates Bay beach down a long path of concrete stairs; a few games of gin-rummy; maybe a couple of hours at the library to check emails, or liming while eating an ice-cream at the bandstand watching the locals walk by. But much of our day is spent reading – researching our future voyage across the North Atlantic to the UK and Europe; flicking through cruising guides to the Windwards and Leewards or just relaxing with a good novel.

Locals at the bandstand

Waiting for a shower to pass over 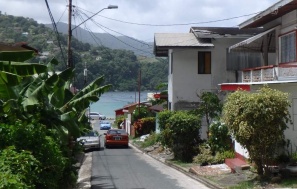 View into the bay

On Fridays I attend the veggie market located near the fuel station and stock up on anything they have – cucumbers, capsicums, tomatoes, beetroot (which I then pickle), potatoes, apples, bananas, peppers, onions, garlic, carrots, pineapple and lettuce if available. Fish can be bought from the locals or at the local supermarket they may have frozen goat and chicken pieces, as well as fresh bread and eggs and other grocery items. No beer or cigarettes sold here though.

There is an ATM outlet opposite the library, although I’m told it doesn’t always have money. I’ve not used it so I can’t say. The alternative is to catch a maxi-van to Scarborough. We tried to do this one morning but after two hours of waiting for room on the vans for us (had to let the school kids go first), we decided we’d go for a swim instead!

Fishermen stumped when yachts anchor in the fishing zone

The local fishermen don’t hassle yachties like in some places, and if you want some fish or crayfish there’s always someone who can cater to you. The shallower area at Pirates Bay is designated as a fishing zone where the locals use seine-nets to catch bait fish. But unfortunately many yachts either aren’t aware of this or choose to ignore the charts and anchor as close to the beach as possible. Some fishermen were understandably upset at this which is unfortunate.

Over the past week though, not many fishermen were out as a large northerly swell swept into the bay causing yachts to yaw, dip and rise as the swell rolled under. Dumping waves smashed Pirates Bay beach removing a piece of 1″ conduit which brought spring water to the beach. All that now remains is a few logs and a trickle of a stream leeching into the sea. Local guy Sonson has a small shack at the beach from which he sells beers and drinks. As he packs up his chairs at the end of the day we sometimes chat to him. He told us that the recent swell was big but he’s seen much bigger in the bay.

Getting ashore during the swell was slightly tricky and most yachties ferried their first mates ashore rather than risk leaving dinghies to fend for themselves with a dangerous swell around the dock. One dinghy at the dock anchored off, but alas, the swell was too much and the boat was sucked under the dock only to lose its outboard.

Fresh spring water at the beach

One particular night the swell seemed at its worse and the next morning one of the local’s fishing boats was perched where the surf dumped it – on the road!

During all of this we continued swimming to the beach, riding the swells and currents as we went. On the worse day of the swell I decided not to swim as the waves were big dumpers filled with sand and debris at the steep beach. Wayne, on the other hand, decided he would, so he did! From the bow through binoculars I watched him swim through the 2m swell and battle the dumping waves to make sure he got there safely.

But sadly like much of the places we’ve been, snorkelling around this area hasn’t proven to be too exciting. Few fish and not particularly interesting coral, although some decent brain and fan corals appear now and again. The large swell also decreased the visibility for a while, but we still get out and poke around, careful not to get stung by fire coral. The conditions also brought a flood of bluish jelly fish into the bay; some days it’s worse than others and I wear my rashy to stop the little stings (BTW I hate jellyfish!). 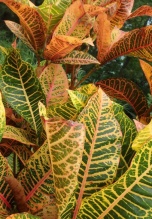 I’ve joined the Charlotteville Library and every couple of days I go and sit in air conditioned comfort for a couple of hours and use their internet for downloading podcasts, vodcasts or just to sit and read what’ going on in the world. For a reasonable TT$25 (A$5) joining fee, the library staff welcomes transients to join the library and utilise their services which includes borrowing books. The membership extends to other libraries on the island too. Each afternoon the local school kids, dressed in smart school uniforms, descend on the library to catch up on their homework.

Charlotteville is a great place to hang-out during the hurricane season and before we leave northwards we’ll have a look at some other bays on Tobago, before we clear out from Scarborough. As we move north we’re looking forward to catching up with friends we haven’t seen for some time too.

Sailing the world aboard Blue Heeler
View all posts by blueheelerhr39 →
This entry was posted in 2016, Trinidad and tagged Caribbean, Charlotteville, Liming, Snorkelling, Trinidad & Tobago. Bookmark the permalink.