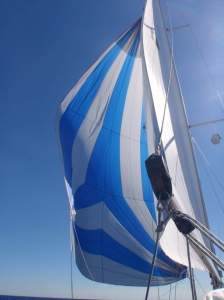 For the first time in who-knows-how-long, the wind blew from behind allowing us to unearth the spinny from the fore-cabin. I honestly can’t remember when we last used the spinny but if I think hard, it may have been two years ago when we first arrived in the Caribbean. That explains a lot about the sailing conditions we’ve had since then!

So with wind up around 18knots – perfect for our kite – the short 8nm sail from Les Saintes to the western coast of Guadaloupe was a delightful change from the typical beating to windward. Once around the southwest corner with the wind creeping up to 20kn we changed to a northwesterly course, snuffed the spinny and unfurled the sails for a comfortable 13nm sail to the anchorage at Pointe Malendure north of the small township of Bouillante. 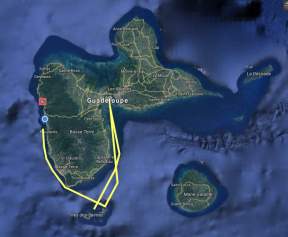 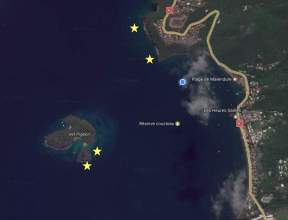 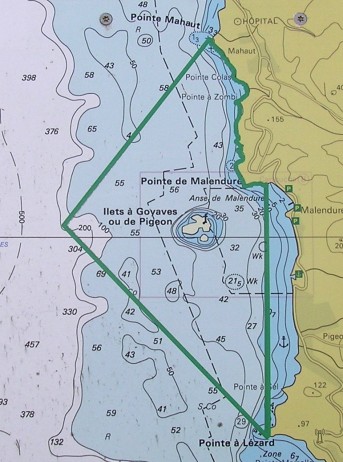 This area is known as the Jacques Cousteau Marine Park. The park extends 1.5 west around Pigeon Island, 1.5nm north to Pointe Mahaut and 2nm south to Pointe A Lezard. We’ve received mixed reviews about the diving in this area so as usual we decided to snorkel first to check it out before we went through the hassle of locating our dive gear buried within various lockers throughout the boat. 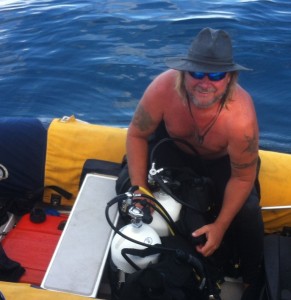 To the east of Pigeon Island is the main snorkelling area. Although a little deep for most snorkellers (depths up to 10m in this area), there are heaps of fish and lots of interesting corals.  At the south east of the small island at around 12m below is a statue of Jacques Cousteau, complete with beanie on his head, but he’s now missing his right hand (most likely now a souvenir on some diver’s mantelpiece!). Following south and west of the small island is a magnificient rock wall filled with fish life and coral; still a little deep in most places for the average snorkeller though. To the west of Pigeon Island is a dive area known as “Le Piscine”. It looked promising but too deep to snorkel.

The following day we grabbed our scuba gear to explore the depths.

Tied to one of the yellow moorings we donned our scuba gear and descended into the deep.  Twenty-two metres below the surface the colours are vibrant blues, yellows, greens, reds and purples; the water clarity is better than at the top where the wind chops up the water.

We found the best time to dive is before 9am, or rather, before the hundreds of paying snorkellers spread across the water like polystyrene balls from a burst beanbag. There’s plenty of boat traffic too, and it’s a little unnerving diving below with propellers spinning above. This place gets very busy!

Away from Pigeon Island at Pointe Malendure is the dive area known as the ‘Japanese Gardens’. There are three white commercial moorings here, but as we like to dive early we tied up to one of the moorings. We had two dives here that day – down to 22m then another at 13m. I think this is the best diving in this marine park – rock walls and underwater canyons covered with rich velvety colours of plantlife and corals – reds, blues, purples, greens, yellows of all shades and textures. The large expanse of soft white corals swaying back and forth in the swell reminded me of ostrich feathers. 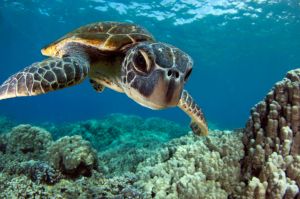 Getting close and personal to the sea-life is what I enjoy; tiny vivid blue fish stay close to yellow tubular homes; brightly painted parrot fish come out from under rocks; spotted moray eels poke out of openings indicating their disapproval of our intrusion; and varieties of batfish court each other in a dance before our presence is known. Each time I saw a turtle I would swim less than a metre behind swimming in unison with the strong stroke of their fins. Fantastic experience! Shame I don’t have an underwater camera as I had the opportunity to take some great shots (must buy a Go-Pro before I head to the South Pacific). It’s lovely to see the fish up close; they virtually have no fear of us. Imagine if it was like this everywhere…

I’m not certain of the marina park boundaries, but each day that we went to the Japanese Gardens dive two fishing boats would drop a net and drag it around the area. Not sure what they were trying to catch but it was a little disappointing to see them so close to the park. In fact one day as we were ready to jump in the water, the fishermen were so close to us that we waited until they’d gone in case we were caught underwater in the net. You never know, we might have ended up on someone’s dinner plate!

One afternoon after a good dive, a catamaran motored into the anchorage; in fact a couple we hadn’t seen for a long time – Dave and Mary-Margaret of “Leu-Cat”. Last time we saw them was at Chagos in the middle of the Indian Ocean in 2014. Lovely to see them again after so long and catch up on their plans for the coming season.

Fortunately the wind during our stay here has remained fairly moderate – characteristically 5-10knots at night, followed by an onshore breeze of up to 10kn during the day. The shifting winds do cause anchored boats to spin around many times during the day, but so far we’ve witnessed no boating disasters (although a couple of boats have anchored too close to us which is quite unsettling when the wind shifts). 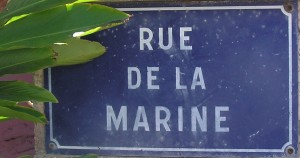 This anchorage is convenient to supermarkets, laundrette, fuel station, boulangerie and ice-cream. About a mile south of the anchorage is a breakwater and small boat harbour. You can tie up in here for access to well-stocked Carrefour and Leader Price supermarkets for yummy cheeses and cheap wine. There is also an auto store, fantastic boulangerie, pharmacy, doctors and a few other stores. Across the road is a fuel station. I couldn’t find an ATM but the guy at the fuel station let me withdraw from him. The main ferry dock at Plage de Malendure gets a little busy during the day with so many punters, and when the seas come up it’s a little hard to get on/off the dinghy too.

On the 21st and 22nd February however a cold front passed over bringing strong westerly wind, rain and westerly seas, which made this anchorage extremely uncomfortable for about a day. News from the Martinique Facebook page reported that a couple of boats further south in Martinique dragged in the strong conditions and ended up on the beach – disastrous!

Well, we’ve dived more here than we’ve dived in the past three years, and we expect to do some more dives before we leave the Caribbean. Having a dive compressor on board makes it easy to refill the tanks and get going the following day. The weather over the next week is for strong easterlies so our plan is to hang out in Guadaloupe a little longer.

Sailing the world aboard Blue Heeler
View all posts by blueheelerhr39 →
This entry was posted in 2017, Guadaloupe and tagged Caribbean, diving, Guadaloupe, Pigeon Island, scuba, turtles. Bookmark the permalink.