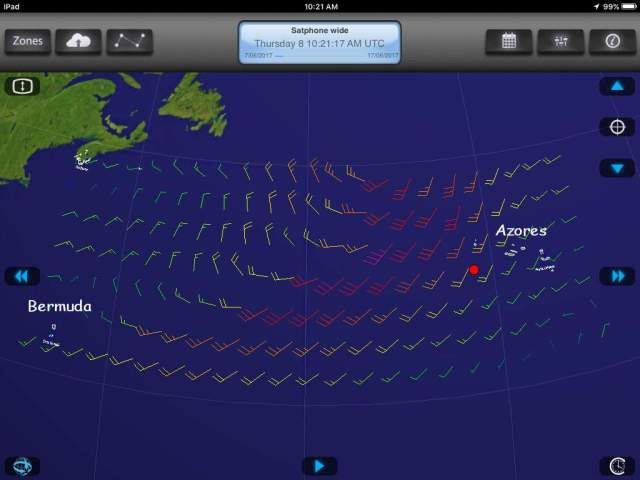 Thursday 8th June. We weren’t going to outrun this low. Forecast winds from PredictWind and Saildocs.com suggested winds no more than 35-40kn and seas between 4-5m. Experience has taught us not to believe grib files to that degree! Fully expecting winds gusting up to 50kn and wanting to slow down and let this thing pass over so we could have a nice sail to finish the trip we decided to deploy our Jordan Series Drogue and ride out the weather. Good idea?

Hi everyone, Did we really think we could sail across the North Atlantic without Mother Nature slapping us around somewhere along the way! Ha! After 19 days and 2300nm of mostly great sailing, the final days would prove to be the most challenging.

Fresh weather GRIBs show no signs of the impending low easing. Not that I expected it to, but it would be nice to see it shift further north. The low pressure system is forecast to steamroll over us starting in the wee hours of Thursday 8th and last for around 24-36 hours. Winds forecast between 35-45kn and 4-5m seas, but of course grib files are notoriously conservative when it comes to gauging wind speed. So today while still in light winds, we double checked that we were ready for the blow. Sara 2 and Coruisk are around 400nm behind us so the blow will arrive much earlier for them. Inishnee have headed for Flores and should be in harbour today.

We plan to deploy our Jordan Series Drogue. We’ve never used this – never had to – but it’s designed to keep the stern into big seas to avoid getting knocked about or prevent hurtling down huge waves potentially broaching in the trough. We have to know how to use it, so it seems like an ideal occasion to try it out. Our speed should drop dramatically as we trail a weighty chain attached to the end of a 100m x 20mm rope with over 130 small parachutes attached to drag in the water. So our trip will take a little longer, but I’d rather arrive at Horta safely than go flying in there at 10kn in the middle of the night! An email from another cruiser with two inexperienced crew aboard says he’s taking no chances, preferring to sail 500nm south to avoid the blow. He’ll sail north to Horta again next week once it’s passed.

About five hours ago just after I woke Wayne to come on watch, a sickening grinding noise emanated from the aft cabin. After so many miles, our auto-pilot decided it had had enough and decided to not play nice. Fortunately we have the wind pilot which we then used to maintain course. Once I returned to go on watch after a restless sleep, the sky showed signs that the blow was on its way.

While still at 20kn, we deployed the drogue (we’d never had to do this before, so wanted to make sure it was set up correctly rather than fuss about in 35kn winds). No sails up, locked wheel and wind pilot secured and not operating, the drogue’s 120+ parachutes caught the water and slowed Blue Heeler to a crawl.

We went below and waited.

Held in position by 100m of rope with 132 little yellow parachutes meant we weren’t moving fast. While the wind piped up to around 40kn and the very rough seas swelled around 4m, Blue Heeler was held stern-to clocking over 1-2kn.

We hunkered below to catch some zeds and basically ride out the weather. The worst weather was overnight but by this morning, the wind had eased back to 20kn, although the seas were still big causing a lot of bashing of waves into the hull and knocking us about. Blue Heeler was pooped a few times, but with our cockpit curtains down and washboards in place, we stayed dry and warm.

By 10am we decided to try and haul the drogue back on board as the conditions were fine for sailing, despite not being ideal to drag a drogue aboard. Now, I won’t go into the detail of hauling in a drogue here – that story can take another 1000 words – but dragging it aboard using ropes and winches took all our strength and two hours, using rope techniques from our climbing days.

By 12noon the drogue was back on board, we’d set the course for Horta, trimmed the sails and had Blue Heeler bouncing along in 4m seas with 108nm to reach land. Time for a bacon and egg butty!

Note: Yacht crews participating in a transatlantic race were rescued much further north of us. The BBC would report this as a “once in a lifetime storm”. Read more.

Read more about our experience using the drogue.

Sailing the world aboard Blue Heeler
View all posts by blueheelerhr39 →
This entry was posted in 2017, Azores, North Atlantic and tagged Drogue, North Atlantic, Ocean, passage. Bookmark the permalink.
Loading Comments...
Comment
×
%d bloggers like this: