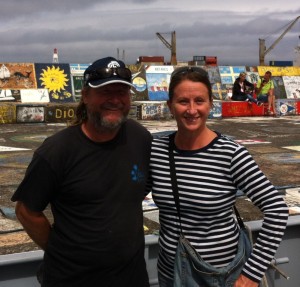 Approaching Horta, with the 2350m volcanic island of Pico hidden under a veil of cloud, a huge dark shape appeared on our port side about 30m from us. The massive unidentifiable whale dwarfed our small vessel. It is great seeing these huge water mammals, but I’m not so keen when they frolick too close though. A sober reminder of the damage they can cause, when a few days later we would read that a vessel recently sank after hitting one of these beauties only 350nm from the Azores. 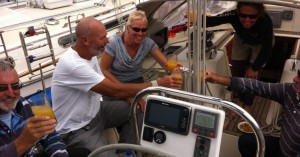 Brian, Jim, Kathy, Emma, Dave and us having a celebratory drink after three weeks sailing.

After spending a day with the drogue trailing behind us, our final day sailing into Horta was about as good as we could have hoped for. After 2,485nm and 21 days at sea, we were very pleased with our voyage and within a few days, the crews that had left St Maarten three weeks earlier got together to celebrate our crossing.

The Azores is an archipelago of nine islands located 1200nm south of the UK and about 1000nm west of Portugal. Sailors from all around the world on their way to their homes in the UK, Europe or the Mediterranean, congregate at the Azores to prepare their boats ready for the next leg of their journey. Horta is the main ‘hub’ and has most things sailors and boats need.

Marina at Horta with Pico in the background

As you might imagine, Horta is very busy with sailors at this ideal sailing time of the year. The marina has only 300 berths, but there is probably 600 vessels here; most of which (including us) are rafted up three or four deep. We have rafted up to a German vessel, which is next to a fishing boat. It’s a bit of a leap and jump to get ashore! The clearance into the Azores is straightforward, doesn’t cost anything and the Immigration, Customs, and Harbour-master are located conveniently at the marina office. The cost of a berth depends on the size of your vessel, but we pay around 18 Euros a day which includes water and electricity. A busy shower block at the end of the marina also houses washing machines (which are usually very busy) and there’s a 2 Euro fee to use the hot water showers and the washers are just under 4 Euro. It’s all very good really.

The concrete walls, pavements and even breakwater rocks around the port of Horta are covered in paintings completed by sailors. Many sailors pass through this port numerous times updating their paintings with the year of their voyage. Our first time here (and more than likely our one and only time), so I sat in the sun to paint Blue Heeler’s contribution to the outdoor gallery. Of course, I had to include an image of ‘Spud the Blue Heeler‘ plus the seven-point stars of the Southern Cross from the Aussie flag. Walking around the port I also found a few paintings by people we’ve met along the way. 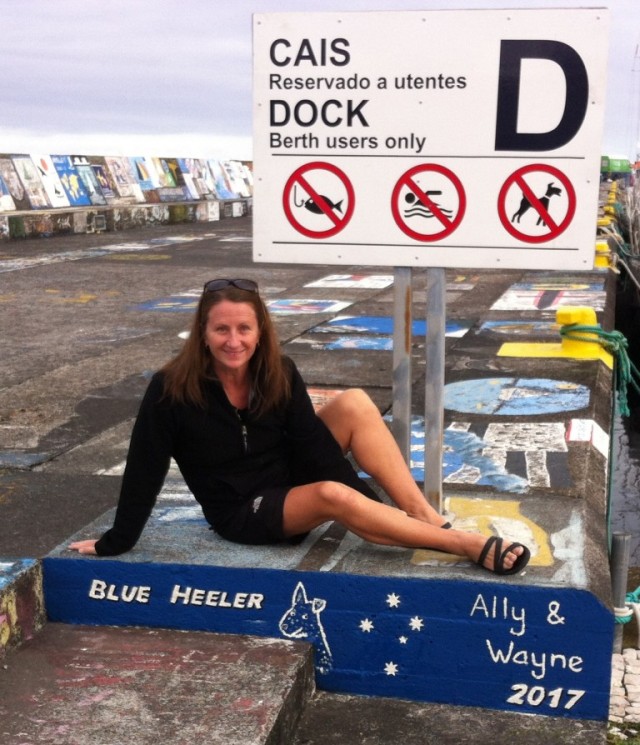 Felix crossed one week before us 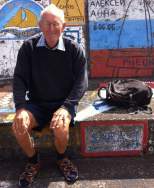 After numerous trips to Azores, John from ‘Sara 2’ about to fix up his painting from years ago. 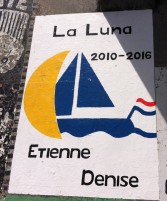 We met Mirus in Indonesia 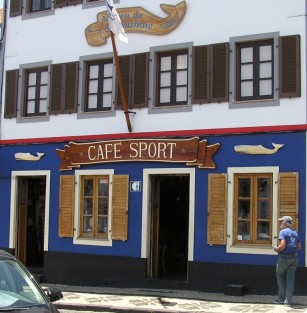 Eating out in Horta is inexpensive, compared to the Caribbean. And I think the variety of food is better too. Famous Peter’s Café Sport on the waterfront esplanade is a popular place for passing sailors and we often ended up there for a drink or a meal. Upstairs is the famous Scrimshaw museum, where many fine pieces of delicately carved whales teeth are on display. Tucked away on the narrow cobblestone streets are various small shops that are worth poking around in. 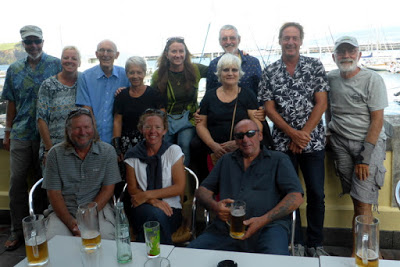 Great bunch of sailors heading out to dinner

For the crews of the boats that participated in our voyage HF net, we got together for a meal at Genuino’s restaurant, enjoying their tasty local cuisine, seafood and delicious red wine, along with good company. Genuino Madruga is a Portuguese sailor who sailed around the world twice and his restaurant is a showcase for all his souvenirs.

Before we went site-seeing around the island, there were a few small jobs we had to attend to, but the big one was to fix the auto-pilot (which skipper managed to do quite easily once we located the parts and had them shipped in from Portugal). While we waited for the part to arrive we hired a small ‘smart’ car and zipped around the beautiful green island. 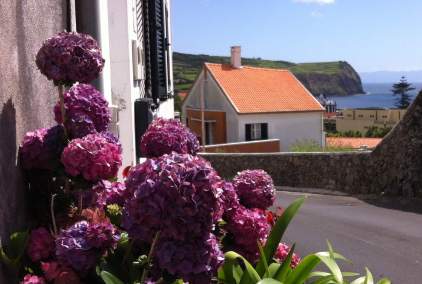 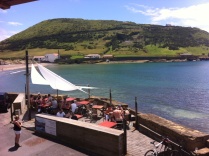 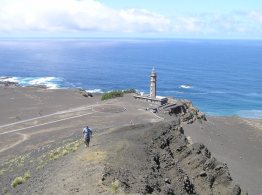 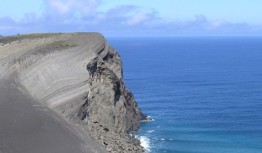 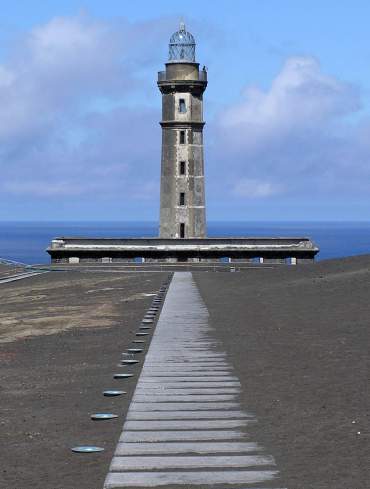 The roads were very quiet despite the fact that the day we hired the vehicle, a car rally took place around the island, cars often overtaking us as we weaved our way around the tiny island. Within a couple of hours of slow driving passing fields filled with rows of colourful hydrangea plants, we reached the other side of the island to visit the volcano and lighthouse at Capelinhos. This volcano appeared out of the sea in 1957 then promptly half-buried the lighthouse. 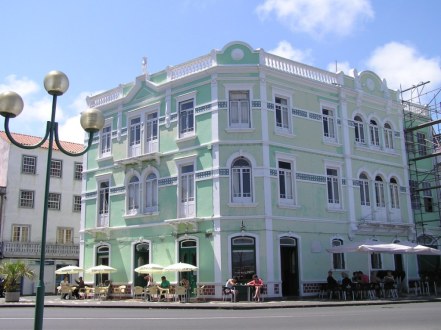 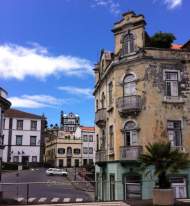 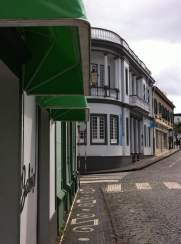 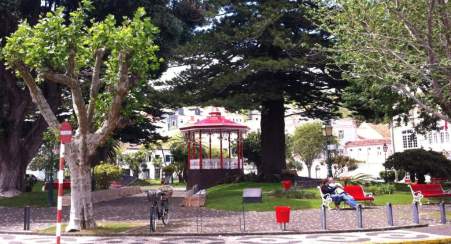 Around the island and even in the town of Horta, most buildings have little if any signage. That is a good thing generally and looks tidy, although it was sometimes difficult to locate a cafe to stop for a coffee. Fish and chips in the old part of Horta completed our driving adventure. Before taking the car back we loaded it up (which didn’t take much!) with more goodies for the next voyage from the well stocked Continente supermarket.

Now that the auto-pilot is working again, the fridge is full of meat, yummy Greek yoghurt and we have veggies in our nets, we are ready to continue our trip. Each day we look at the weather between the Azores to the UK to familiarise ourselves with the weather patterns. So far it’s looking okay, with a few lows now and again to keep things interesting.

But before we head to the UK, we plan on sailing across to the island of Terceira, which is only 70nm from Faial. We’ll leave for the UK from Terceira, but will let you know what we get up to over there. 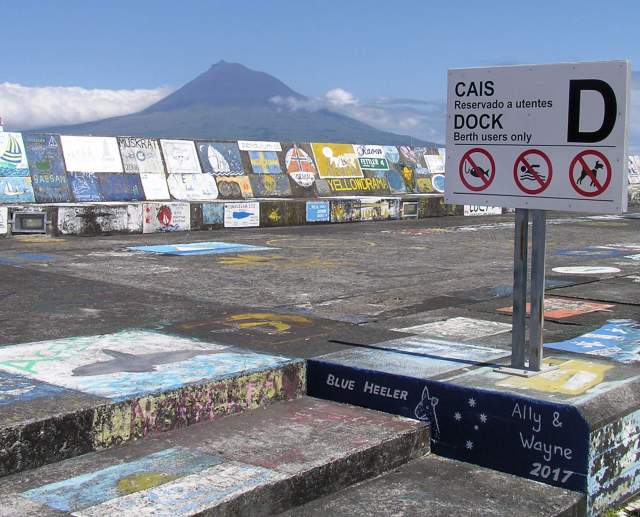 Sailing the world aboard Blue Heeler
View all posts by blueheelerhr39 →
Aside | This entry was posted in 2017, Azores, North Atlantic and tagged Azores, Horta, North Atlantic. Bookmark the permalink.