Our goal this northern summer is to head to the Baltic Sea visiting Denmark, Sweden, Norway, and also try for Finland if we have time.

Already one month since we left Portsmouth, we’ve been to France, Belgium and The Netherlands, with Germany next on the list. Only a few months left…

Originally we’d planned on two weeks motoring through the famous Dutch canals, but with so much to see and do, and with so many bridges to pass through, we took a little longer than expected. It was worth it!

Check the height of your mast!

Unlike sailing the seas, sailing inland is unusual for the simple reason that we have a very large stick in the middle of our boat over 18 metres high above the waterline. We also have a keel draft of 2 metres, which can be problematic in shallow waters.

The Staande Mastroute, or Mast-Up Route is a recommended route for those who wish to see The Netherlands without having to un-step the mast. Further research of the route came up with little information written in English (blogs, etc), but we managed to find enough information through books, websites and apps to get us through. I have also produced some of my own information on the Mast-Up Route which you can find here.

Our journey took us from the small coastal town of Breskens near the Belgium border, to Delfzijl in the north east near the border with Germany. The trip took three weeks and we traveled around 500km. 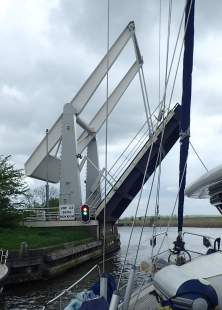 From Vlissingen where we entered the canal system, through to Delfzijl are dozens of bridges and numerous locks to pass through. I didn’t count them all, but there are many! Bascule bridges, drawbridges, swing bridges and lift bridges – all styles and sizes.

Those who’ve followed us for some time will remember our journey through the inland waterways of the USA back in 2015. Those locks were very high – the highest was 20 metres (84 feet) in the lower Tenn-Tom Waterway. In the Netherlands though, the locks only go up or down 0.10m-0.20m. Some locks stay open if the water levels are okay.

Management of the inland waterways in The Netherlands is impressive. Over the past few hundred years, almost 20% of land has been reclaimed from lakes or the sea, much of the water is controlled by a system of locks or sluizen. Water flows into The Netherlands from all directions – from the Rhine River of Switzerland and Germany, while the North Sea is always ready to surge in at any opportunity.

Most of our trip was spent motoring high along dykes, looking at the fields or villages which were much lower. Aqueducts had us motoring high above major highways! The bridge keepers or brugwachters mostly spoke at least some English and we were always dealt with quickly. Rarely did we have to wait long for a bridge or lock to open. Mostly the bridges are remote controlled so no request to open was necessary. In the northern part of the Mast-Up Route is where we had to pay a bridge toll by placing money in a clog flung out on a long line!

There are so many boats in the Netherlands and the appearance of a Hallberg Rassy didn’t raise any eyebrows. But there were a few double-takes when it was discovered our flag isn’t British but is in fact the Aussie red ensign. Not many from Down Under this far north! 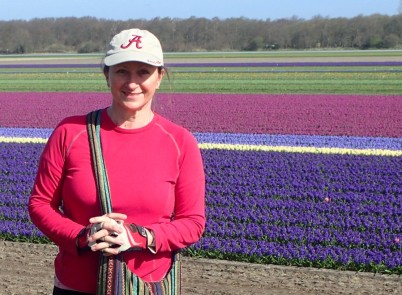 April is early in the season, which is good as there’s plenty of places at marinas and towns are generally fairly quiet. In fact only a few weeks ago while we had a blast of snow in Gosport, the Dutch were ice skating on the canals! But our first two weeks here were glorious days in the mid 20s. It’s a little colder now as the temperature has returned to normal. Daffodils can be seen everywhere.

Making our way north we stopped at delightful historic towns such as Middelburg, Willemstad, and 800 year old Dordrecht. Further north a couple of days at Haarlem to enjoy a day’s ride to the tulip fields and the famous Keukenhof Gardens, plus a ferris wheel ride at the local fair to get some aerial shots of Haarlem.

From there, a day’s motoring along the Noordzeekanaal and we arrived at Amsterdam. 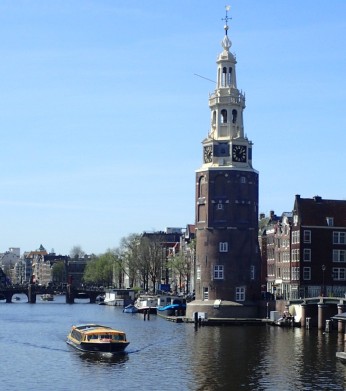 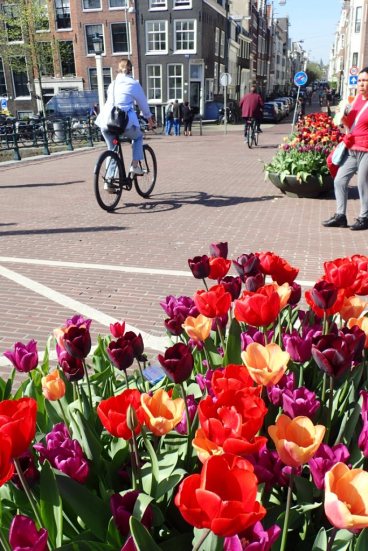 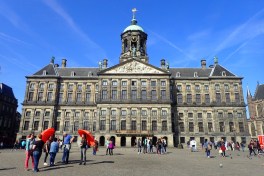 The last time we were in Amsterdam was in 1998. Back then things appeared a little seedy than it does nowadays. Back in ’98 we had an altercation with a tall intimidating guy who alleged we had recorded on video the girls in the red light district and demanded we hand over our video camera. Problem was we didn’t have a video camera! Wayne had to open his backpack to prove the point. “Oh, my mistake” I remember him saying. Twenty years later, everybody has a camera, although I believe filming the girls in the windows is still not recommended. The familiar smell of wacky-backy fills the air, more so than I remember… I wanted to visit the Anne Frank Museum but it turns out there is a two month waiting list! Never mind – I was happy enough cycling around and taking photos of buildings, canals and people.

Now, I have to say that my favourite thing about The Netherlands is the bicycle network. I just love the fact that people of any age get around by bike! But the Dutch ride boldly and with confidence, apparently owning the road, so you’ll need to be a pretty good rider to join in. Fortunately we are both used to busy city cycle riding, but even I was bedazzled by the rhythmic flow of bike traffic. The Dutch aren’t forced to wear bicycle helmets, unlike Australia, which has a rule for just about everything. Even small children sit at the handlebars, some with protective windscreens.

Cycling around Amsterdam is a great way to get around and they have the best bicycle parking lots! Ferries crossing the river are free so getting across from our marina was easy – West Amsterdam one day; east Amsterdam the next, passing through the large open gardens where people sunbaked in the unseasonably warm weather. Great fun!

Enkhuizen was the next stop for Blue Heeler. Another beautiful historic town with many of the buildings over 500 years old attracting many tourists from the long canal boats. Easy to cycle around too.

Dutch exploration is well known to Aussies. Until the early 1800s Australia was once known as New Holland, named by Dutch seafarer Abel Tasman in 1644. Tasman was also famous for naming Anthony Van Diemans Land, later shortened to Van Diemans Land by the British. In 1856 it was changed to Tasmania in honour the first European discoverer – Abel Tasman.

The Dutch were also responsible for much of the exploration of the west and northern coasts of Australia, but it seems they didn’t much like what they found (or rather what they didn’t find – ie: suitable land or water) so didn’t pursue colonisation.
Just imagine how things would be different if the Dutch did colonise Australia… 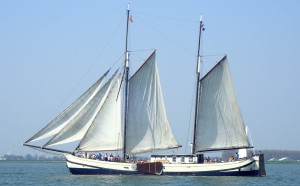 From Enkhuizen to Stavoren we sailed across the Ijsslemeer – the best sailing day we’ve had for quite some time. Old classic Dutch sailing boats and local yachties were out in force.

The distance was only 12nm to Stavoren but still a couple of hours without using the engine is bliss. A breeze up to 20kn and full sails, Blue Heeler heeled slightly before we furled the sails to enter the canals in the province of Friesland.

The Mast-Up Route has a number of different entry and exit points, and after talking to a local, we decided to enter at Stavoren. From here we made our way through canals to Warten, staying a couple of nights because of poor weather, before moving through narrow and shallow canals on to Leeuwarden.

The trip from Warten to the town docks of Leeuwarden, to the beautiful Dokkum, through the National Park Lauwersmeer reservoir, to Groningen is very shallow. Our keel drifting through the soft silt in most places but nothing to cause loss of speed.

Along the Friesland canals is where we were asked to pay bridge tolls. At the bridges (usually bascule or draw bridges) the brugwachter will drop a clog attached to a pole with string where you have to put the desired amount, usually three or five euros, inside the clog.

Our timing to reach Groningen was a little off. We made it as far as Zoutkamp on Thursday 26th and decided to top up the diesel and stayed the night at the friendly family run Haven Hunzegat. On Friday 27th was the King’s birthday and as luck would have it, King Willem Alexander and Queen Maxima were to visit Groningen. But all the town bridges were closed due to the public holiday so we tied up to a watchplaat just outside the city and I rode my bike into town. The monarchs had left by the time I arrived, but the remainder of crowds that had turned up for the special event were enjoying the outdoor bars and celebrations.

From Groningen we motored the final leg of our journey to Delfzijl passing through 24 bridges along the way in 4 hours.

So now we wait at Delfzijl. A huge thunderstorm blew over last and another is expected this week.  The next leg of our trip will take us to our next country, Germany.

Want to know more? Find out about travelling the Staande Mastroute here.

Sailing the world aboard Blue Heeler
View all posts by blueheelerhr39 →
This entry was posted in 2018, The Netherlands Staande Mastroute and tagged Amsterdam, Canal, Haarlem, Ijsslemeer, Keukenhof Gardens, Lisse. Bookmark the permalink.