High tide at 6.30 so to ride the ebb south we left at 7am as we had 36nm to reach Loch Scavaig. With little to no wind and unusually calm conditions, we headed south along Kylerhea passing under a 60m electricity cable (they never actually look that high though). This strait can run up to 8kn, but we only experienced 2-3kn. The fastest speed-over-ground for us was a mere 8.5kn. Our friends Kathy and Alan were staying nearby so we took a detour into their bay and waved goodbye, a text confirming they had seen us.

Rounding the bottom of the Sound of Sleat, we headed north west towards Loch Scavaig. To port: the small island of Eigg, and the much larger island of Rhum. Canna is further west and just visible on the horizon.

The entrance to Loch Scavaig is a little tricky, as the chart is not 100% accurate; charts never really are. With the aid of a raster chart and Google Earth, we could identify a rock at the entrance which we gave a wide berth. Two yachts were already anchored and we dropped the hook in 2.5m and laid back to sit nicely just ahead of them, allowing passage for tourist boats ahead of us.

Towering over the anchorage are the high Cuillins of Skye – the highest mountain Sgurr Alasdair at 992m – making this anchorage one of the most outstanding we’ve anchored anywhere in the world. Entry is only by boat, and no roads lead into this pristine area.

From the anchorage at Loch Scavaig, following the fresh water stream over the rocks, the valley opens up over the fresh water lake of Loch Coruisk. Having first met our friends Brian and Chris from yacht “Coruisk” back in 2014, it was a delight to actually be at the place of their yacht’s namesake. 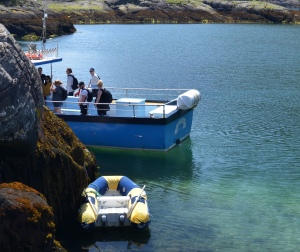 Tourist boats drop people off at the rickety metal steps every half hour or so. Paddling our dinghy across, we tied up to a nearby metal ring to keep dinghy away from the landing area.

This part of the world is truly captivating. I would have liked to have stayed overnight and enjoy the subtle tones of a setting sun or the warm tones of a morning sunrise, but as the anchorage is quite exposed to southerly winds and swell, after a hike and a refreshing dip in the water (in 16degC mind you!), we continued on our way to reach the isle of Canna, some 15nm west, by early evening.

The harbour at Canna has around ten yellow moorings available for yachts. We anchored south of the landing area in 6m and made sure the anchor was dug in well as we wanted to explore the island on Tuesday and a big blow was due on Wednesday. It’s not clear how much boat weight these moorings can take and with winds expected of up to 35kn we decided to ride it out on anchor.

But before the blow came, we enjoyed a day out with hairy coos, woolly ewes and just a few hundred orange-footed puffins. 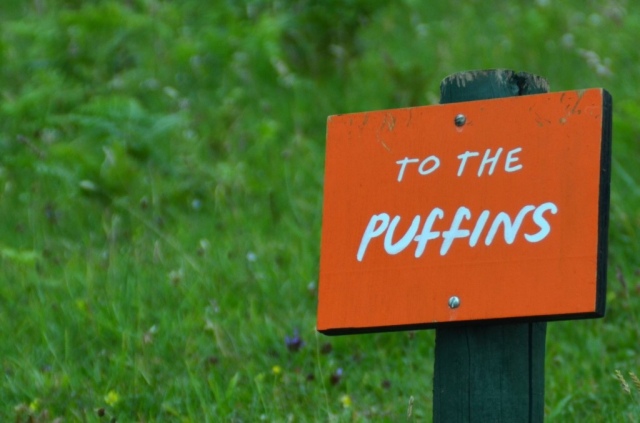 Sailing the world aboard Blue Heeler
View all posts by blueheelerhr39 →
This entry was posted in 2019, Scotland and tagged Canna, Hebrides, Loch Coruisk, Loch Scavaig, Scotland. Bookmark the permalink.
Loading Comments...
Comment
×
%d bloggers like this: