Scotland: The Minch and Highlands

The Minch is the strait of water between the Highlands of Scotland and the Hebrides. Strong south-westerly winds regularly blow up this strait making the trip sailing south particularly challenging.

At the end of June after days of strong south-westerly winds, Blue Heeler had a chance to sail from Orkney. The wind was light and this particular day was the only day with a forecast southeast wind allowing us to leave Kirkwall in relatively light conditions.

Heading north from Kirkwall, Blue Heeler then passaged through the bubbling overfalls or ‘roosts’ of Eynhallow Sound to the south of Eynhallow Island. Although the wind was light – around 12kn from the southeast – an outgoing ebb meeting the incoming Atlantic swell at the breakers around Reef of Burgar, certainly kicked up a fuss.

We kept the breakers well to port and wondered why a fishing vessel went north of Eynhallow Island. Perhaps we should’ve followed the local boat? Later though we’d read that it’s not advisable to sail north of Eynhallow. Within moments we’d punched our way through the angry waters and into the incoming swell of the Atlantic. It was still a couple of miles before we could get the sails out and turn south towards Cape Wrath some 65nm away riding the incoming swell along the way. We had wanted to try for Stornoway on the Outer Hebrides, but already the wind had backed.

Having just passed the summer solstice, the nights were still quite light. In the darkest hours between 12.30am to 2am we made our way through to an anchorage at Camus Blair in Loch Inchard. Access to the anchorage was straightforward and fortunately there was no fish farm to upset out plans. A couple of buoys nearby didn’t cause any problems when we dropped anchor in 8m at 1.30am.

Night sailing in The Minch

Sleeping late to catch up, we left by 1.30pm for a 20nm trip south to Kylesku in Loch A’Chairn Bhain, located between Kylestrome and Unapool. The famous Kylesku bridge has a 24m vertical clearance and the narrow passage can get lively during strong tides, although it was benign when we navigated our way through.

We tried the anchorage to the south of the small hotel/pub, but with many fishing moorings and the likelihood of fouling our anchor probable, we decided to anchor behind the islands to the east of Kylestrome in 17m. The chart indicated a muddy bottom and once we’d decided where to anchor, avoiding the fish farm platform plonked in the middle of the anchorage, we dropped the pick and it held straight away.

With wind upwards of 30kn for a few days, we remained holed up at Kylesku. My handmade Scottish courtesy flag blew apart at the seams from flogging against the capstay. The few days on anchor were drizzly and cold. On the nearby island I could see seals sleeping on the sun-warmed kelp as the water level dropped 4m due to spring tides. We didn’t venture ashore as there was no decent place to land, and the fetch on the water was fairly rough. The anchorage is remote and we could pick up just enough 4G signal to download the weather forecast. Alternatively the Stornoway Coast Guard reports the weather every three hours from 0710 on VHF16.

A few days later, the tides, wind, weather gods, all aligned so we planned to leave in the evening and sail 40nm south to Ullapool. Our ETA was 4am, which at this time of year gave us enough light to enter the harbour.

We weighed anchor and I was surprised to see absolutely no mud or kelp! I have no idea what we had hooked onto over the four day blow, but it had grabbed and stayed put on something. One lonely piece of slippery kelp was all I had to remove as the fluke of the anchor positioned itself into the bow roller.

The seas were rough, despite the wind at a relatively comfortable 12/18kn. Blue Heeler was knocked around, making the trip slightly less comfortable that we’d hoped. We motored through the Loch A’Chairn Bhain on a west heading before passing the Old Man of Stoer column as we turned south. With rough seas causing our sails to flap and fold, we decided to motor-sail this trip.

With no moon that evening, and plenty of rain clouds around, surprisingly we could still see the horizon in the darkest hours between midnight and 2am. In the drizzle we navigated our way south-east through the Summer Isles. Amazing as it sounds, our radar did pickup some of the buoys from fishing floats, but that wasn’t always the case. To be sure we didn’t snag any on our prop, I sat outside the cockpit in the cold with the binoculars to keep a lookout for buoys, which weren’t easy to spot in the semi-darkness. It’s all very well to snag a rope in the tropics and jump in to remove it, but up here it’s not a task that either of us would want to do at midnight in cold water.

By 2.30am the glow of the morning sun started to brighten the sky. Fishing vessels from Ullapool left for work as we entered the exposed harbour. I hooked one of the eight visitor moorings and we went to sleep until late morning.

The dinghy hasn’t been used much over the past year. We did use it at Papa Stour in Shetland but ‘Trusty’ the Tohatsu outboard didn’t play nice and we had to row back to the boat. Wayne took Trusty apart to see if there was a problem, but no evidence of fuel problems. So we launched the dinghy, pumped it up then put Trusty on the transom. Wayne gave it a spin around the harbour and it ran fine.

After a hot shower and lunch we went into town, tying dinghy up to the floating dock, out of the way of incoming tourist vessels.

At the Ferry Boat Inn overlooking the anchorage, we had a couple of ‘Speckled Hens’. Tesco is a short walk away and after replenishing our supplies with fresh food, we bought some deliciously hot fish and chips; the warm salt and vinegar steam teasing our tastebuds until we could indulge back on board.

The next day had winds up to 30kn so we sat aboard and did mundane tasks. The bay was like a washing machine as it’s quite exposed to the south and west. 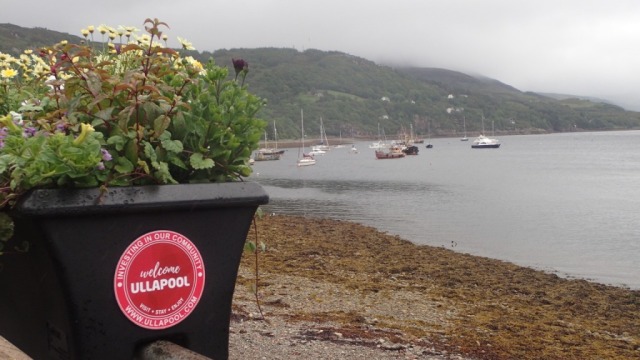 Eventually the blow dissipated and the calm returned. We had thought of getting fuel at Ullapool, but the only option was to utilise 20 litre jugs to fill up with. Not so convenient for 250 litres, so we would wait. We had to go ashore and pay our mooring dues of £13 per night for three nights, then we went back to the pub for a beer, then Tesco’s then the chippy…

Next day we departed at 10.45am on high tide and 12kn wind. But the wind was from the west so it didn’t take much of a decision to go only 3nm to Loch Kinaird and drop anchor there. No point bashing head on into wind and waves.

We sailed west for a couple of hours, but the wind died and we had to motor the rest of the way. The day was sunny and fresh and the visibility was clear enough to see the Hebrides.

The anchorage within Loch Shieldaig to the south of Gairloch is open to the north. With light winds forecast we anchored in 6m to the north of the moorings.  On the way into the anchorage we pulled into the floating dock at Gairloch to fill our water tanks.

Another fine and warm day of around 15degC. The cockpit is like a conservatory, often 10degC warmer than outside. We sat and had our morning coffees in the cockpit, but again no 4G signal, so we listened to some podcasts instead.

Stopped for water at Gairloch

Our plan was to get diesel from the Gairloch wharf. I had only £140 cash remaining on me and the harbour master only accepts cash. Once tied up I went to the store/post office to withdraw money, but they wouldn’t accept a foreign debit card. I then walked to the Bank of Scotland about five minutes walk away but the ATM was broken. When I was finally served in the bank I was told they couldn’t help me with a withdrawal either. Bummer. So I had to walk back to the boat and hoped that Wayne hadn’t already started filling the tanks. In the end we put in 100 litres of red diesel and said goodbye to the friendly harbour master.

The wind was on the nose but no more than 10kn and slight seas. Visibility was excellent and we could see all the way across The Minch to the Outer Hebrides. The lighthouse of Redpoint is at the head of Loch Torridon to the east and we travelled south into Inner Sound before turning west through the strait between Raasay to the south and Rona to north.

The entrance to the anchorage was hard to spot visually, but charts are good and we made our way through at mid tide. There isn’t much room to anchor and five moorings now fill the only available space. Clearly marked in Sharpie on the buoys, the fee to moor is £15 per night plus a landing fee of £1 per person. An honesty box is located up from the jetty, complete with change if you need. 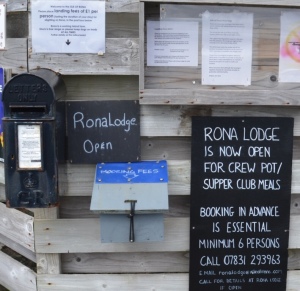 To get the most out of our stay we went ashore and walked along dirt tracks until we found one that lead to the highest point. Views across to Skye were excellent and our little Blue Heeler bobbed down below us all alone in the bay. The day was warm so we knew a change was coming. Back on board we settled in for the night listening to bird calls and heavy morning rain.

The following day we headed over the sea to the mystical island, Skye.

Sailing the world aboard Blue Heeler
View all posts by blueheelerhr39 →
This entry was posted in 2019, Scotland and tagged Hebrides, Scotland, The Minch. Bookmark the permalink.
Loading Comments...
%d bloggers like this: