Our nomadic impulses tell us to keep moving (a rolling stone gathers no moss and so on), but this year we are travelling deliberately sluggishly due to the global pandemic. Our time is staying mostly at anchorages, and avoiding expensive south coast marinas by choosing inexpensive pontoons or moorings – decisions determined by tides, wind and access to facilities.

From the delightful Fishcombe Cove anchorage at Tor-Bay we headed east with the goal of reaching Swanage, a small bay south and east of Poole Harbour. This trip of 68nm was helped along by an east flowing current and westerly wind of up to 25kn.

The sea area south of Portland can be vicious at the wrong tide as currents collide causing steep seas. Staying at least 4nm south of Portland Bill lighthouse the wind and current moved us swiftly along, reaching up to 12kn at times. 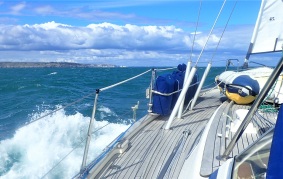 As we rounded Durlston Head and headed north towards Peveril Point, the following seas increased in size, with some waves cresting around us. Yikes! Steering west into Swanage would have the large waves on our beam, which didn’t appeal to us, so we continued a little farther on to reach the open and shallow anchorage at Studland Bay where we dropped the pick after a long day sail.

Our plan was to take our new Safefill gas cylinders to the nearest gas fill centre (around 4kms inland from Swanage). (Side note: it’s not easy to fill gas cylinders in the UK; Safefill is one brand of cylinders which can be filled at selected outlets. Most people have Calor exchange bottles but these aren’t convenient for sailors from abroad).

Storm Francis was forecast to blow through so we prepared the boat by hoisting the anchor sail and extending our anchor chain another 20m and waited.The night before the storm dozens of boats emptied the anchorage leaving Blue Heeler plus two other boats. We had plenty of swing room and space behind us in case we should drag anchor.

Early morning Tuesday we awoke before the imminent storm and had a cuppa in the cockpit. Funny thing about anchoring; at some point overnight a boat anchored right next to us. Too close I thought considering an imminent storm. At the same moment we were discussing the advantages of anchoring away from others, our anchor let go and began to drag in the weedy bottom! Within a second or two we had the engine and windless on, hauled the anchor. We re-anchored in a better area with loads more swing room. I have to say though in the almost ten years of sailing around, I can count on one hand how many times our boat has dragged and this was one of those times.

By lunchtime the storm blew in. We hunkered down that day, night and the next day with two anchor alarms on, just in case. The wind was around 30kn mostly, but gusted up at times. 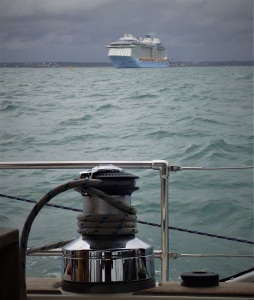 Behind us at anchor were a number of stationery cruise ships including the “Queen Elizabeth” and “Anthem of the Seas”. With a truncated cruising season brought on by the pandemic, these floating hotels (some say floating petri dishes) have no-one to play shuffle-board and watch gaudy entertainment.

Once the storm abated, we sailed from the anchorage and headed east towards the Isle of Wight.

The day started off okay; some cloud, and a reasonable forecast of 15-20kn SW winds. Half an hour later a woman’s voice blared a new forecast over the VHF “Imminent Force 8” – what the..?  This was the only alert with no other weather forecast suggesting gale force winds. We reefed the sails anyway and waited for winds to reach up to 34-40kn. But reducing sail also reduced our speed which meant we wouldn’t reach the narrow entrance into the Solent at the premium time of tide.

A couple of hours later, with no Force 8 wind in sight, we reached The Needles at the western end of the Isle of Wight at a good enough time to ride the fast flowing current into the calm waters of the busy Solent which separates the Isle of Wight from mainland England. We reached the mouth of the Medina River and motored through Cowes to the Whitegate visitors pontoon. This pontoon is quite convenient and reasonably priced for boats that don’t require water or electricity as it’s a short dinghy ride across to the Shepards Marina where visitors can use the showers, dispose of garbage and get water if needed.

We spent the weekend at the Isle of Wight walking around the river paths, walked into Newport along the river path and caught the bus back. Despite COVID19, people were out and about, the shops are mostly open and besides masks and hand sanitiser, things appeared quite normal. I expect this will change once summer is over. We took advantage of the situation and had a socially distanced lunch at the Folly Inn.

To the north of the Isle of Wight is an anchorage at Osborne Beach where we anchored for a few nights. I don’t believe we are allowed to go ashore here as it’s part of the Osborne estate, Queen Victoria’s weekender, so we stayed on board for a few days.

We stayed a week on the visitors pontoon at Itchenor, again no water or electricity but paying for a week works out quite good value rather than paying daily (£85 for a week). There’s not much at Itchenor, except a jetty, a good pub (Ship Inn) and a popular café. If you plan on coming here you might want to stock up before-hand as it’s a few kilometers to the nearest grocery store.

Face masks on the ferry 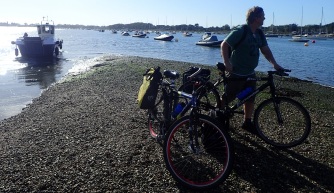 Ferry takes us and bikes to shore

It wasn’t long before we had the bikes off and rode in to Chichester, about 12kms away. The Itchenor Ferry service is convenient to get the bikes to the shore, otherwise we use the dinghy.

There are heaps of walking tracks around the area and I happily went out each day with MapMyWalk app running in the background. The beach at West Wittering is quite good and plenty of people sunning themselves. The water obviously too cold for most to swimming though. It’s about a 12km return walk to West Wittering from Itchenor along the coastal route.

As we hadn’t stayed at a marina for many weeks, we returned to Cowes to replenish some stocks and use the laundrette in town to wash a few weeks of laundry.

The ‘winter season’ for most marinas is from 1st November through to end of March, so the winter season will be upon us.  So, as we do each year around this time, we source a place to stay over the winter months. It’s not so easy in the UK to find a place that allows people to stay aboard their boats over winter. I’m not sure why, since they don’t mind people staying aboard any other time of the year. This baffles me, considering boats are designed to stay aboard. The good news is that we have found a marina that is happy to have us stay over winter and it’s somewhere different from where we’ve stayed previously so we have a new region to explore. I’ll tell you more about it in my next post, but from the photo below, maybe you can guess where.

The ongoing isolation and distance from friends and family during this pandemic is affecting everyone, even those like us, who choose this lifestyle. So, a big thankyou to some of the kind people we’ve met recently – Robert from Plymouth contacted us and offered to help us in anyway he could, and Bill and Beverley who we met in Cowes were very generous to us during our stay at Cowes. A little kindness goes a long way…

Sailing the world aboard Blue Heeler
View all posts by blueheelerhr39 →
This entry was posted in 2020, South England and tagged Chichester, COVID19, cruising, Isle of Wight, Itchenor, Wittering. Bookmark the permalink.