Last winter I was looking forward to spending winter on an overseas island somewhere to the south. Little did I expect the island to be Portsea Island on the south coast of England in Hampshire. Not quite the tropics, but the best we can do under the circumstances! 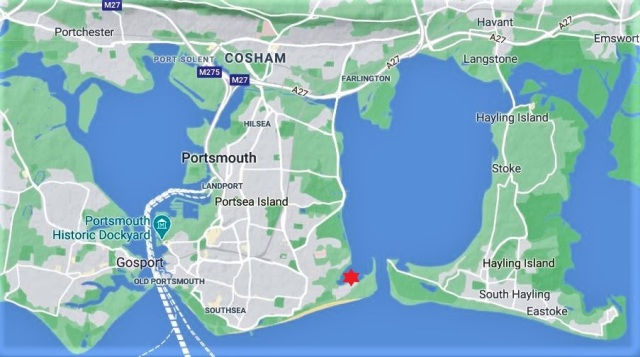 Portsea Island is an area of low-lying land with Portsmouth Harbour to the west, and Langstone Harbour and Hayling Island to the east. To the south is the spithead of the Solent with views across to the Isle of Wight. We stayed at Gosport three years ago, but didn’t spend too much time in the Portsmouth area, so it’s a nice change to have somewhere new to explore. We did pop in to Portsmouth Harbour and Gosport for a few days and caught up with fellow Aussies Mike and Nicki from ‘Zen Again’ who we first met on the 2012 Indonesia Rally. I took a ride around Gosport and it hasn’t changed much since we stayed there in 2017. 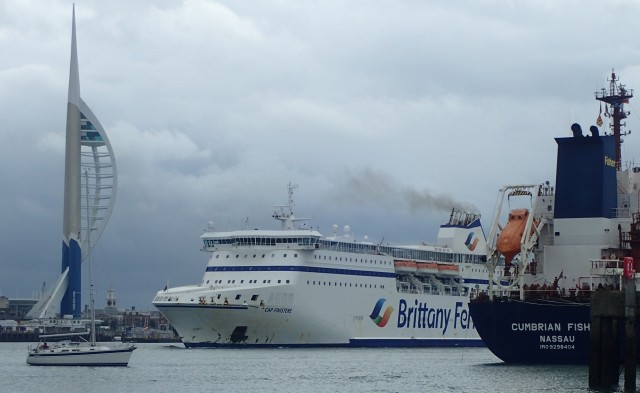 Our home for winter is the Southsea Marina close to the popular seaside resort town of Southsea located at the south-east of Portsea Island. The marina has a good vibe, friendly people, friendly dogs, and a convenient Indian Restaurant (Bombay Bay) and Marina Bar and Café. A small supermarket is ten-minute walk away next to a fish’n’chip shop, but mostly I ride my bike to the nearest Lidl, Tesco or Aldi to fill up my panniers. The entrance to the marina is barred by a cill gate which is raised and lowered with the action of the tide. We entered on the top of the high tide at 4m which gave us plenty of depth for our 2m draft.

Forts no longer defending but accommodating

At the south of the island is the Southsea Castle, built during Henry VIII’s time, plus the D-Day Museum and other historic places of interest we’ve yet to visit.

To defend the important Solent and Portsmouth Harbour, forts were constructed around the coastline and on the Isle of Wight, as well as a number of massive sea forts in the Solent. The four sea forts were built between 1865 and 1880 to protect the eastern approaches to Portsmouth Harbour. However, the threat of invasion didn’t eventuate at the time and the forts weren’t engaged in war. But war did eventually come to Portsmouth.

Due to the strong naval presence, between 1940-1944 over 60 air-raids caused widespread damage and killed almost 1000 people. The Solent forts were used to defend the Portsmouth dockyard during this war (and the Great War), sustaining so much damage they were eventually mothballed in 1956. Nowadays two of the forts offer accommodation for guests and something to look at for the beachgoers gazing across the Solent.

From the marina the beachside esplanade is a lovely ride or walk into Portsmouth. Otherwise we can cut through the centre of the island along a good network of cycle paths to admire the beautiful Victorian mansions and terraced houses lining the narrow streets.

Lockdown rules were relaxed over summer and as confirmed cases of COVID have risen sharply in the UK and Europe I expect new rules to be introduced over winter. Already tighter restrictions are in place in a number of regions to the north and around London. But for now, I make sure to take advantage of the daylight hours and fresh air to walk or ride for a couple of hours exercise each day.

As usual at this time of year at 51 degrees north, we’ve set about preparing the boat externally for winter – removing and stowing sails; cleaning dinghy and removing cover for its annual makeover; painting Boracol on the deck to prevent algae growth over winter; flushing the outboard(s) and watermaker; stowing ropes and other topside items; plus many other small jobs. There are also below deck tasks like sorting out cupboards to alleviate condensation; converting the binoculars holder into a spice rack; and dragging out the electric appliances for cooking hearty winter meals. Staying warm, comfortable and dry are the main objectives.

To fill in our days over winter there are the other projects from ‘the list’. This year though we don’t have such an extensive list as last year, but we still need to plan and research the ocean passages coming up next year plus improve our offshore communications and navigation tools and the like. 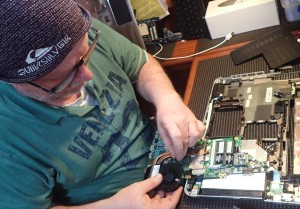 Wayne is currently engrossed in a commendable project of building a device that will integrate our various gadgets – for a change, a less-physical project that doesn’t entail getting covered in oil and grease!

This weekend the UK clock rolls back from daylight-savings-time and we return to Greenwich Mean Time (GMT). Back in March 2019, the European Parliament voted to stop changing the clocks in the EU. So, in October 2021, EU member states will change clocks for the last time, although I think with all that’s going on at the moment, I don’t believe this change is confirmed. Not sure what the UK plans to do with their time zone and daylight savings, but I expect that’s on the bottom their ‘to do’ list…

So, while we’re so far away from family and friends, we are keeping as busy as possible, focussing on what really matters in life and not worrying about the unimportant stuff.