First glimpse of Alps on our way to Munich

Our Interrail pass (with first class upgrade) allowed us to enjoy breakfast at the Vienna ÖBB lounge. Unfortunately the invitation didn’t include Germany’s DB lounges, but we did try 😉

After loading up with free snacks and coffee from the lounge we boarded the train at 8:37am. This trip took us via Salzburg and the northern side of the Austrian Alps. Salzburg is the location of the Von Trapp family from the Sound of Music, so I found myself humming to the famous tunes – “Raindrops on roses and whiskers on kittens…”. We arrived in Munich at 12:30pm. 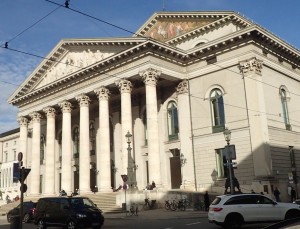 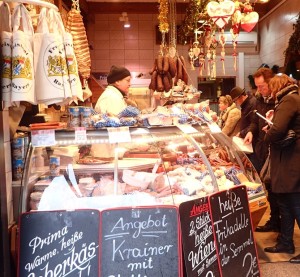 Buying public transport tickets was really easy and a machine was available at the end of the platform when we alighted. So that I didn’t have to return, I bought tickets in advance for the duration of our stay – two single tickets to get us to the accommodation, a Gruppen XXL ticket which we’ll use going to Dachau and a Gruppen inner city ticket which we’ll use the following day. The total cost was €34. Tickets need validating for each day of travel which can be done on the bus or train.

Accommodation isn’t cheap in Munich but I found a nice room some 15 minutes by U train north of the city as Dülferstraße. The host went away for the weekend so once again we had the place to ourselves. 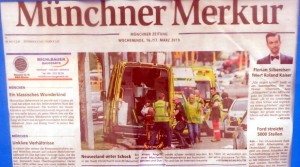 The first day in Munich we planned to visit the Dachau Concentration Camp Memorial Site. That same morning we awoke to the sickening news of a mass shooting at a Mosque in Christchurch New Zealand murdered 50 innocent people; slaughtered by a 28 year old Australian. So much hatred stimulated by ignorance and bigotry makes me sick to my stomach.

So, on a drizzly morning and with a heavy heart, we took the bus to the Dachau Concentration Camp Memorial.

Our tour guide explains the horrors while we look out at where the barracks used to be.

Our guide, an Austrian woman, knew survivors from Dachau. In the cold damp couple of hours she shared graphic tales of sorrow and hardship over the 12 years 1933 to 1945 when the camp was operating. Dachau was the prototype camp and its style was rolled out around Europe.

Holding political prisoners at first, the camp eventually imprisoned anyone who didn’t meet the ‘criteria’ set by the Nazis. Next door the SS training facility was responsible for producing the evil people led by architect of the SS, Heinrich Himmler. By the time of liberation by the US Army over 206,000 prisoners had been held in Dachau, with almost 32,000 deaths.

At the end of the tour an explicit video is shown but this and other videos are also available on YouTube for those that want to understand this terrible chapter in history. Walking into the shower/gas chambers and seeing the ovens in the crematory where thousands of bodies were disposed of is quite chilling. Unlike larger concentration camps such as Auschwitz, Dachau’s gas chambers were not used for mass murder but they were built to ‘test the effectiveness’ of mass extermination.

A male only camp, the men generally died from the conditions – lack of food, beatings, hangings, suicide and so on. This worsened over time as the camp could’t handle so many men. Crematoria were constructed to dispose of the deceased. It’s hard to believe what you’re actually looking at. A walk through this area sent a chill up my spine.

It may not be everyone’s desire to visit a scene of death and misery, and although Dachau is a grim place to visit, it’s also an important memorial reminding us of the horrific events that took place in the hope this never, ever happens again – never again. The slaughter in Christchurch on this particular day made this even more significant.

The following day we tried to shake off our blues and with brighter weather and blue skies we went into town and strolled around the English Garden then along to Marienplatz to see the chimes perform at midday at the neo-gothic building, New Town Hall. Munich was literally demolished at the end of WWII and the town has rebuilt the old buildings in the former style so it’s hard to even know they’ve been rebuilt. Of course before we left we had to visit the famous Hofbrauhaus for a dunkel bier!

O’Hara and Guinness in Munich

We ended up at the St Patrick’s Day celebrations taking place in town. People from around the world filled the seats and we squeezed onto a table with a couple from Frankfurt. It was a pleasant day out!

For a change of pace, we go to the Alps to ride the Glacier Express!